The Guardsmen of the Amsterdam Kloveniersgilde (Part 1)

This post is about another new project I am starting for 2020.  This one is based back in the 17th Century.


I am sure this is a picture that most people are familiar with.  It is supposedly one of the most recognisable paintings in the world today.  Completed by Rembrandt van Rijn in 1642, it is now commonly called the ‘Nachtwacht’ or ‘Nightwatch’.  It depicts the Amsterdam Militia Company of District II, under the Command of Captain Frans Banninck Cocq.

As I am interested in 17th century military history, any contemporary pictures of soldiers and battles are great for providing a direct window back to the times, showing the dress and equipment in fabulous detail.  In the internet age many of these pictures are readily available to browse and study.  With the Nighwatch also being a very famous picture, it is one that I have often come across while searching for paintings on the web.  There is something about the picture that always attracts my attention.

Firstly, it is undoubtably a stunning picture.  The detail is incredible and the picture has that amazing Reuben ‘light’.  As well as the actual ‘look’ of the picture there is also the title, ‘Nightwatch’.  It provides an instant air of mystery for me; what and why are they watching, and who are they guarding against?  Then there is the way the characters are portrayed.  Many similar paintings from this period have the soldiers portrayed more like a slightly casual school photograph, with all of the subjects in static poses and probably looking out at the viewer.  In the Nightwatch, in contrast, there is a definite sense of movement; something is happening, but the different characters are each wrapped up in their own activity, or preparations.

I suspect that I am like many other wargamers and modellers in that an attractive military themed picture is one of the major ways in which I get drawn in to collecting and painting things. You see the picture and think “Oow - they’d look great in miniature on the tabletop, I’d like some!”.  So, how could I scratch this itch for the Nightwatch?

I could collect some general mid 17th century figures and paint them as Dutch militia. Mmm. No, that’s not going to do it. Ok, what if I tried to recreate each individual figure from the painting using available 28mm figures, and arranged them as in the picture?  Now that’s getting somewhere!

I mulled this idea for some time, in the background, while getting on with more tangible wargaming activity. Then I saw a flash mob video on YouTube (https://youtu.be/a6W2ZMpsxhg). It was made to advertise the restoration work being carried out on the painting. The final frames rekindled my desire to create the painting, but with miniatures.

With the start of a new year, and wanting some new projects to keep me going in 2020, I decided to start my Nightwatch project.  This project is all about recreating the figures from the painting in miniature, so the first task was a detailed review of available figures.  I know most about the 28mm ranges for this period, and I was pretty sure that this size of figures would give me the most choice.  There are a lot of figure ranges for this mid 17th century period in western Europe.  It includes the British Civil Wars and the Thirty Years War which results in a great selection of ranges from many manufacturers.  The tricky part was trying to identify wargames figures that match, relatively closely, the figures in the painting.  I didn’t expect to find exact matches, and so I was prepared for some minor conversion work; the odd head swap, adding some green stuff details, things like that. I also needed a nice version of the picture to look at.


Luckily the Rijks Museum in Amsterdam, which exhibits the painting, has a fabulous website, and includes a whole section on the painting, including the ability to download detailed versions of it for personal use (https://www.rijksmuseum.nl/en/rijksstudio/artists/rembrandt-van-rijn/objects#/SK-C-5,0).  This allowed me to get a really good, zoomed in, view of each figure in the painting, and I also discovered a lot of background information about the picture and the individuals portrayed in it. I printed out a copy of the picture so I could makes notes on it as I discovered figures that might fit as a representation.

Here is a list of manufacturers used for the miniature figures (so far!):


(Many more were considered!)

I now had a list of 28mm figure ranges, and a copy of the picture.  There followed some hours of pouring over web catalogues of figures.  Not an unpleasant experience; what wargamer doesn’t like looking at figures!  There were a surprising number of things to consider.  Not only the pose of the figure, but all of the items of dress. Sashes over the wrong shoulder and riding boots were two examples of things that often scuppered a likely figure.  After a couple of evenings’ ‘work’ I ended up with a list of candidates, and then orders were placed.  I knew there would be a certain amount of ‘wastage’ (e.g. figures not used as they came in a pack with the required figure), but this wasn’t a problem as I’m sure these will get used in my ongoing Thirty Years War collection.


Once delivered I could start reviewing figures in detail.  Sometime things in real life aren’t quite as you’d expected, and a figure would turn out to be unsuitable after all, but some of the ‘wastage’ turned out to be suitable alternatives.  I have had to live with some compromises.  Getting figures leading with the same leg as in the picture has been tricky, and some poses in the painting are so unusual that no figure manufacturer would possibly make a figure in that pose.


To finish this first part instalment for my Nightwatch project, here is a description of the first few figures that I have converted so far.

Of course I had to start with the leader of the militia company, the Captain himself.  A position in the militia was highly sought after by the wealthy and influential merchants of Amsterdam in the 17th century. Therefore to be the Captain of your district’s company was a real achievement.  The Captain takes centre stage in the painting and he must have needed to contribute a significant amount to the 1600 guilders (a small fortune at the time) paid the Ruebens on completion of the picture.   Cocq must have liked the end result as he had a copy made to hang in his home. 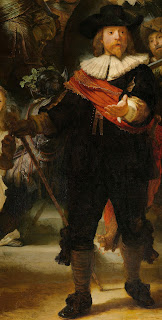 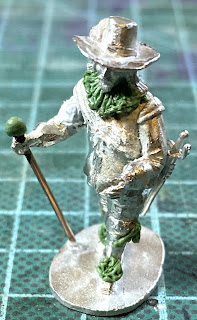 Lieutenant Willem Van Ruytenburch is definitely the most fancily dressed of the militia figures. When you look closely at his clothes you can see they are made of very expensive looking materials with lots of brocades and embroidery. He is also the most brightly dressed, and lit, so he really stands out.  This fits well with his ‘new money’, and ‘out to impress’ background.  (Too Fat Ladies fans will, no doubt, be tickled to find such a famous historical chatter named Lord of Vlaardingen!) 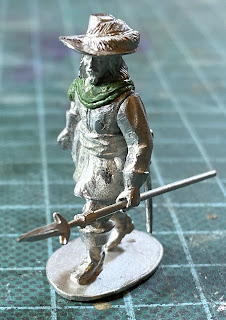 I’ve used another Empress officer for this figure. The figure comes with separate arms so was straightforward to pose. The officer pack comes with separate partisans so I will add one of these after the figure is painted. Willem has a very large and ornate gorget which has been added with green stuff along with some slight modifications to his boots.

Jacob Jorisz is the only figure to appear as a main character in the picture who didn’t have to contribute to the cost of the picture. It is assumed that the drummer was important to include even if not able to afford the cost. 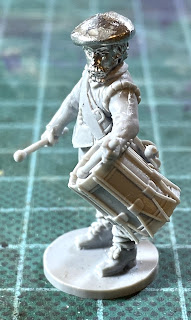 Reijnier Engelen was an older member of the militia, and therefore had probably earned his position as sergeant through long service.  He seems to have had a shady past with fines recorded for selling undersize cloth.  Perhaps the ‘Arthur Daley’ of the militia?

For Reijnier I have used an armoured pikeman from the new 1898 TYW range.  He had his head removed and replaced to give a more sideward glance, and he’ll have a halberd from the Empress ECW sergeant’s pack.

Jan van der Heede was a fairly successful grocer and therefore able to earn a position in the militia and afford to appear prominently in the painting.  He is shown tipping a charge of powder from his bandolier in to his musket as part of the loading procedure.  He looks very dapper in his red outfit, and such bright clothing was apparently expected of a bachelor in Amsterdam at this time.  Interestingly he was married soon after the painting was completed, so perhaps his appearance in the painting turned some eligible ladies’ heads! (As a side note, once married you were expected to dress in more sober, dark or black clothing.) 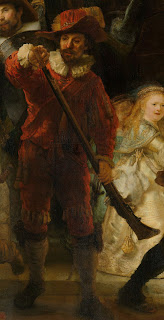 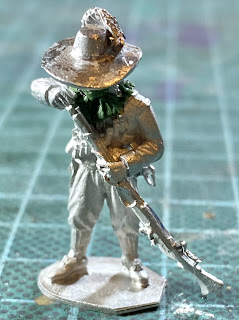 I had to search hard to find a loading musketeer figure in this exact position, also with his musket cast about on his left hand side.  Empress Miniatures once again provided an almost perfect figure, which just needed a frilly collar adding in Green Stuff, and a plastic Warlord feather adding to the hat.

Jan Claesen Leijdeckers, stands just behind the flashy Lieutenant, and is in the act of blowing clear the ‘pan’ on his musket after having fired. Jan’s appearance in the picture was posthumous; he died two years before the picture was completed, but as he had paid for his appearance in it, Rembrandt must have based the figure on another model to represent the deceased Jan. 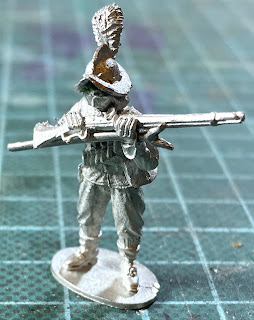 Although I’ve not used Empress much in my wargaming units up to now, they seemed to come up trumps time and again in my Nightwatch figure search.   Jan is based on another Empress loading musketeer figure.  I have added a musket rest to the figure to match the painting, and swapped the soft hat for a helmet, both extras from the bits box.

Almost hidden in the shadows on the left of the painting is a figure of what looks to be a young boy, wearing a helmet, and running with a powder horn.  I haven’t found out much about this figure yet and I assume that Rembrandt was adding a little humorous flourish to fit in the foreground at this point. 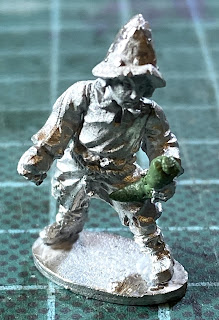 I remembered that Warlord had a similar looking boy in their Pike and Shotte Clubmen Militia range.  I changed his posture slightly (the original is in the midst of throwing a stone) and added a green stuff powder horn to the figure.  Not an exact representation, but he’ll do.

My last figure for this post, standing behind the Captain, is unknown which, due to his old fashioned attire, has led to a belief that his represents the history of the militia, with oak leaves on his helmet, representing victory. 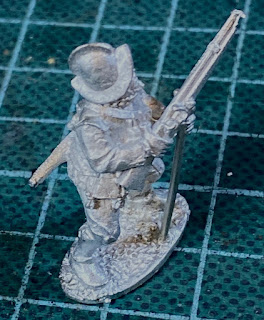 It was difficult to find a suitable figure for the unknown man.  He is in a very strange pose, and to me seems to be firing his musket left handed.  I went to TAGs late 16th century Spanish range to find a suitable figure with the high, puffed breeches, and a helmet.  The figure is firing the more normal, right handed way. so I will compromise on this unless I ever find something more suitable.  I will add a sprig of something after painting to represent the oak leaves.


Next step will be to get some paint on these first few figures, and to start building the next set of the Nightwatch.  If you have any ideas for 28mm figures to represent the figures in the painting then I’d love to hear from you.  Also, I’m always interested in any information you have the painting itself.