The Guardsmen of the Amsterdam Kloveniersgilde (Nightwatch) - Part 3

In this blog post I give an update on my Nightwatch project.  (Part 1 is here link, and Part 2 is here link)   In this project I am paying homage to Rembrandt’s master piece, The Nightwatch, by converting and painting wargames figures to represent the characters portrayed in the painting.  Rembrandt's painting commemorates members of the militia company that protected Amsterdam District II, commanded by Captain Frans Banninck Cocq. 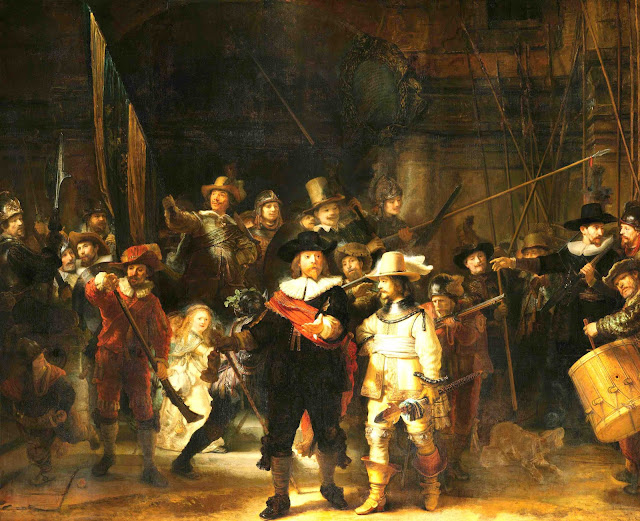 After completing the painting of the first set of figures (in part 2) I set about converting the next batch of figures. This batch of figures are mostly in the background of the picture and so there is often less of them showing. Digging in to their personal backgrounds though is just as fascinating. Below I’ve shown each figure from the painting with my converted and undercoated substitute.


Rombout was from a wealthy merchant’s family, and he himself had an important position in the drapers guild. His respectability is shown through his slightly old fashioned dress (eg the ruff collar). When the picture was painted he was a sergeant in the company and was shown in a relatively prominent position with a dynamic pose ordering the rank and file in two position.  He married a woman from Amsterdam’s ruling elite and this influence would lead him eventually to become the company's lieutenant and his son to later become its ensign. 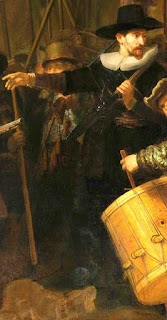 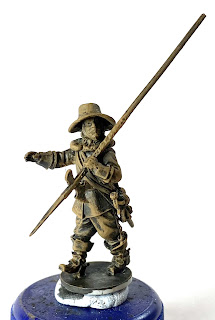 The figures is based on an Avanpost officer who is carrying a partizan. As the Avanpost figures come with separate arms the conversion prices was slightly easier. As I needed to reverse the partizan I removed the original from the figure and drilled out the hand. (Note that Avanpost figures, which are made from resin, often have a brass ‘core’ to their polearms, I expect to keep them straight. Wire cutters were therefore required!)  His other arm was fine and just needed to be raised to the right angle.  I used a Warlord Games head and hat from their plastic Pike and Shotte set. The ruff collar was made out of green stuff.

Barent was a well to do grocer from Amsterdam.  Not much is known about him other than he was a bachelor who lived with his sister. 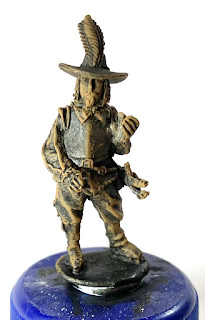 In the painting Barnet appears to be in the process of shouldering, or advancing his pike, in preparation to move off.  His arms and and pike position are slightly unusual for wargames figures being on his left hand side. Luckily 1898 Miniatures’ recently released Tercio range have some pikemen in nearly this pose, or close enough for me! A head swap, was required, from an Empress figure, with the addition of a feather from the Warlord plastic set (a very handy set!).

Walich was born in to a family of wealthy cloth merchants but he had a slight change of direction and became a wine merchant (sounds like a great choice to me!).  He followed his fathers example my joining the militia, and becoming a pikemen. An interesting item is that records have been found that show his household belongings, and these include his pike.  I suppose there is some sense in this as you want you weapons easily to hand in case of any emergency, but it must have been an awkward thing to store! 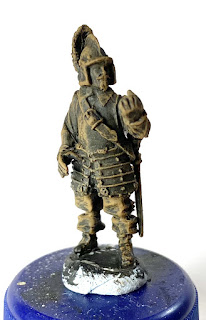 Another 1898 Miniatures pikeman worked well for this figure.  Walich has his Pike in a low 'porte' position. It is interpreted that he has a strip of red cloth tied to the end of his pike as a practice target for the ‘unknown man’ (see part 1) who is in the process of firing.  Not much conversion needed here as the figures burgonet helmet is a fair approx action of Walich’s fancy head gear in the painting. The feather, this time, is from an Avanpost figure.

The Ockersen family had a degree of notoriety in Amsterdam society. In the late 16th century Jan’s great aunt had been arrested, tortured and put to death by ‘drowning in a barrel’ for the act of throwing her shoe through a church stained glass window depicting the Virgin Mary.  This had been an act of iconoclasm; she was part of the Protestant movement which objected to the use of imagery in churches. It doesn’t seem to have done the family too much harm in the long run as Jan was a successful cloth merchant, who later in life would rise to a position of influence such that he became the captain of a different company of militia. 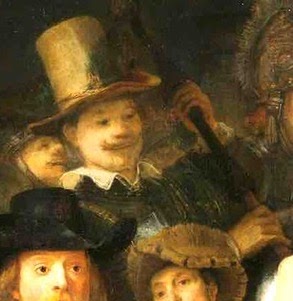 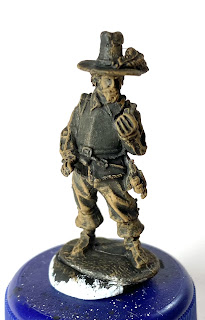 It will no surprise that I used another 1898 Miniatures pikeman for Jan, who’s in a similar pose to Barent above. I just needed to heighten the crown of his hat with some green stuff, and add a Warlord plastic feather.

Claes was another member of the militia from a wealthy and an influential family.  He was a draper by profession and held the position  of ‘shield bearer’ in the company.  His role was to protect the ensign (who carried the company ‘colour’, or flag) and, as his role title suggests, he carried a large, concave shield.  It is likely that by this period in the 1640s that regular formations did not actually have shield-bearers who carried a shield in the field during battles; it was probably only something seen in parades.  In this painting, that was expected to honour the most important members of the company, it is not surprising that we see Claes (and the other shield bearer, Jan Pietersen Bronckhorst) carrying a shield. 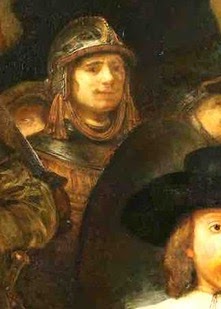 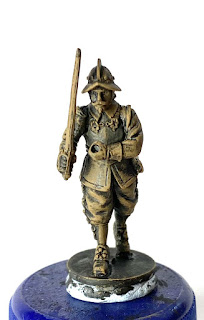 I have used an Avanpost armoured pikeman to represent Claes, who seems to be wearing armour and a helmet in the painting.  The two shield bearers are shown with their swords drawn, ready to defend the company’s colour, and are both carrying a shield.  I used a Warlord plastic cavalryman’s sword arm, and a The Assault Group ‘Venetian’ shield from their equipment range seemed to fit with the shield in the painting.  I’m sure there would be some device on the shields, perhaps the district’s coat of arms.  I am still investigating this. (I plan to add the shield to the figure once both are painted.)

Jan is another of the the painting’s pin-up stars - the ensign - flourishing the company’s colour that represented its honour and was a rallying point in battle.  The ensign was a dangerous position as he would be expected to take a prominent position during any fighting, and would be an obvious target for the enemy.  Ensigns were expected to be single so that a married man, with dependants, would not have to carry out such a dangerous role. It was a position typically carried out by the youngest officer in the company.  Jan’s prominent position in the painting, and his position as ensign, reflect his influential position in Amsterdam society. 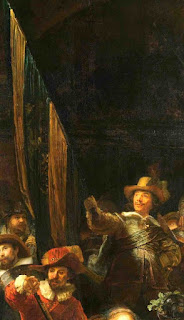 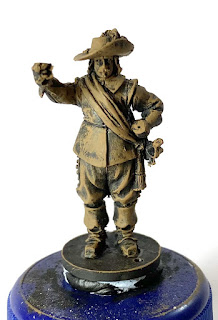 I have used another Avanpost figure for Jan, this time an officer.  I have swapped his pistol for an open hand to carry the company colour.  In the painting we can see that the colour is made up of three horizontal stripes, yellow, blue, yellow.  There is a symbol, probably the district’s coat of arms, in the centre of the flag. This is another thing on the ‘still to be investigated’ pile.

Another mystery of the painting.  The two girls (one is prominent and the other is almost completely hidden behind the first) are a slightly odd subjects to be seen running between the men of the militia.  Many suggestions have been put forward over who or what the girls represent.  The latest thinking is that they are purely a design of Rembrandt’s, and the first girl is an angelic mascot.  She is dressed in fine clothes and is caught in a stream of light as she runs through the throng.  At her belt she carries a chicken, which seems a bit incongruous, but perhaps the chicken’s feet are a whimsical play on the company’s coats of arms which features an eagle’s feet. 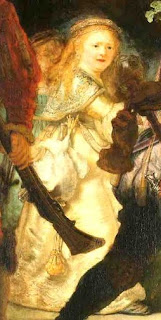 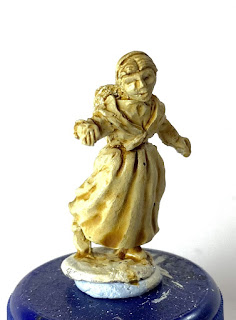 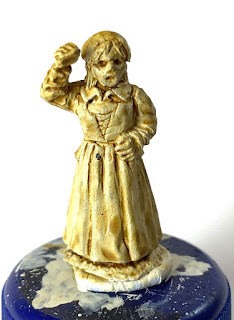 At first I was a bit stumped as to what figures I was going to use for the girls.  Luckily the Galloping Major’s ‘Depot Battalion’ range has plenty of 17th century civilian types, and it threw up a couple of candidates, one from the dancers set, and one from the soldiers' goodbye set.  I have undercoated both in a light cream colour (GW Wraithbone) with dark brown wash (GW Agrax Earth Shade) to help form the background for painting brighter colours.


Here are links to the  websites of the manufacturers used for the miniature figures (so far!):


I hope this overview of the next set of Amsterdam characters on my painting table was interesting.  These individual backgrounds help bring the painting, and its characters, more to life for me.  Not only as a wonderful work of art, but also as a fascinating insight in to mid seventeenth century history.