Old Blue And Other Colours

“These 2 brigades were of the flower of the Army: old souldiers of 7 or 8 yeeres service (the most of them) and whom the King had there placed, for that he most relied on them.” Williams Watts describing the Old Blue and Yellow Brigades at the Battle of Lutzen.

This blog post looks at my approach to representing the Swedish infantry brigades of the Thirty Years War, in partiocular those at Lutzen 1632, using the Pike and Shotte rule system from Warlord Games. 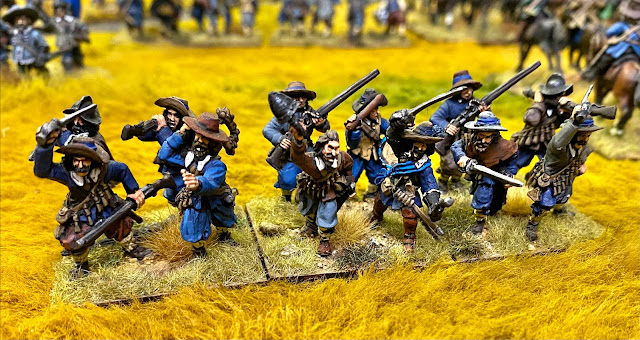 The Swedish ‘colour’ infantry brigades, with their elaborate ‘squadron’ formations, are for me an iconic part of the Swedish army in this period.  I want to be able to reflect these formations, and explore their tactics, in my miniature versions of these brigades.

Here is a brief background to the Swedish infantry brigades of the period.

(The Osprey “The Army of Gustavus Adolphus: Infantry (Men-at-Arms)” by Richard Brzezinski is an excellent introduction to this topic.)

As Gustav Adolph’s main field army evolved during the 1620s key infantry regiments became known by the colour of their flags as well as their colonels’ names; hence we get the Yellow Regiment, the Green regiment, the Red regiment and so on.  Regiments, which were mainly an administrative formation, were grouped in to brigades for battles.  The brigades were named after their senior Oberst (Colonel) who commanded the brigade, or more simply the senior regiment’s colour.  So you have the Yellow brigade, the Green brigade etc. (It is worth noting that the Swedish army was recruited from across Europe, and at Lutzen the majority were German, but also with many Scots, and other nationalities, as well as Swedes.)

Gustav Adolph experimented and evolved how these brigades were organised as well as the tactics and formations used on the battlefield.  On the battlefield a brigade was broken down in to units, of around 500 men, called squadrons. Regiment strengths varied so that a brigade may be made up of one strong regiment, or a number of smaller regiments, so that it had enough men to form the required number of squadrons.  Each squadron in the brigade was made up pike and musket armed troops, with the ideal ratio of muskets to pikes generally increasing over time.

This picture shows a simplified view of a three squadron brigade.  This assumes a ratio of one pike to one musket.  As time went on squadrons would have had less pike and/or more musket.  Surplus musketeers were formed in to a reserve within the brigade, or were detached from the brigade and became ‘commanded shot’ supporting the cavalry, or carrying out some other separate function.  Using the three squadron brigade as a model, and using the quite detailed information available on the strengths of brigades, with the ratio of musket to pike for the Swedish infantry at Lützen I set about planning my toy soldier version of the Swedish infantry.  (See Osprey Campaign #68 Lützen 1632, by Richard Brzezinski for more info.) 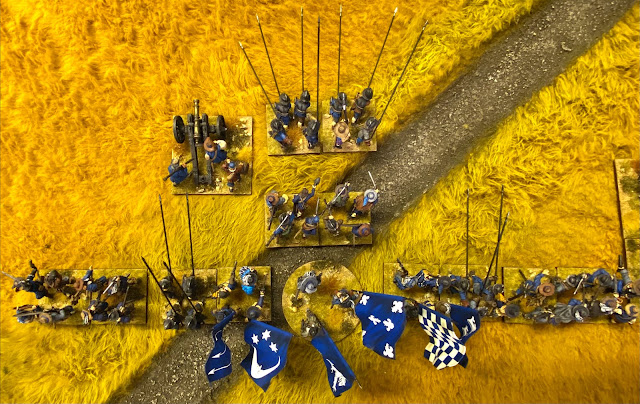 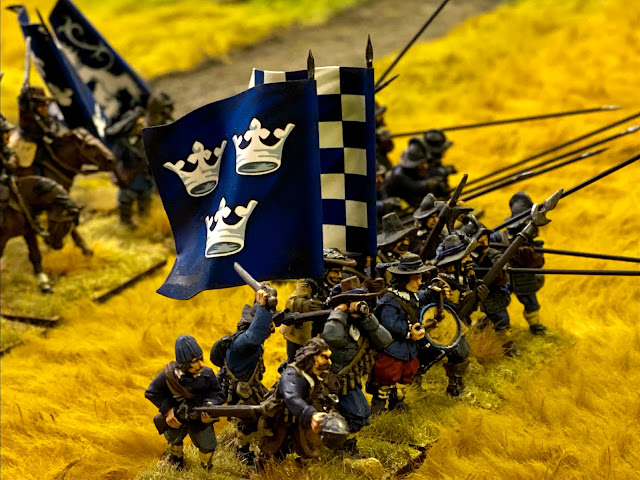 It seems likely that the regiment had blue uniforms as well as blue flags.  I chose to show the unit in a variety of shades of blue to reflect different issues of cloth being provided to the troops over time.  Uniforms for the Swedish infantry were at the whim of their colonel and the availability of cloth where ever the regiment was serving.

Although quite a strong regiment, as it formed a brigade on its own, it was one of the smaller brigades at Lutzen. It also had a roughly one to one proportion of pikes to muskets.  I therefore form the brigade as three ‘small’ pike units, and three ‘small’ musket units.  Each squadron in the brigade is made up of one pike unit and one musket unit.  There is also a light gun model and crew to represent the three pounder guns that were integral to each regiment. 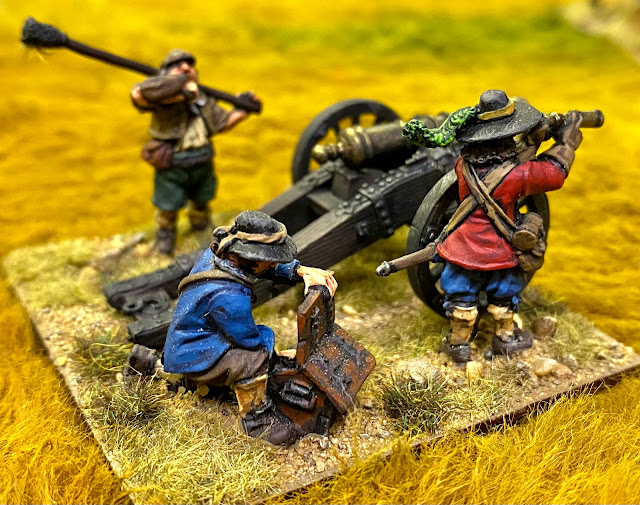 In Pike and Shotte (P&S) units are classified in to three basic size categories: small, regular and large.  At the Friends of General Haig club we tend to use 8 figures in two ranks for small infantry units, 12 figures for regular, and 16 for large.  So for Lutzen this means that the Old Blue Brigade of around 1,100 men scales down in my miniature version of the brigade to roughly 50 figures, with each figure therefore representing about 20 men.

During the battle of Lutzen the Blue brigade were attacked and roughly handled by Imperial cuirassiers.  I therefore have the pike in the ‘charge for horse’ pose.  (A bit of a pain with the long pikes, but I think it looks great!). The pike are a mixture of Foundry and Warlord, and the musket mostly Warlord, with the odd Foundry or Perry officer mixed in.  The light gun is from Warlord. 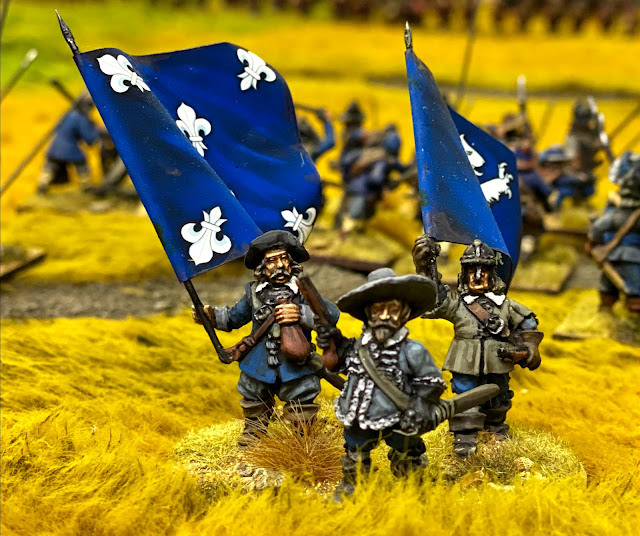 To control this complex formation in P&S games each brigade has its own Commander, and so this circular command base represents Oberst Winckel, the regiment and brigade commander.  Winckel and one ensign are Foundry, and the other ensign Warlord. All flags from Flags of War. 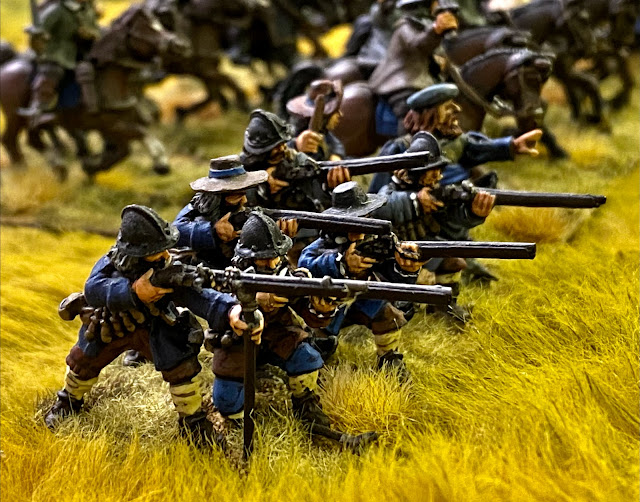 To bolster his cavalry formations, Gustav Adolph deployed small units of muskets and light guns from his foot brigades, with the cavalry.  Such detached musketeers were known as “Commanded Shot”.  In P&S I use small units of musket with a light guns to represent these supports for the cavalry.  This unit of commanded shot represents men coming from the Blue Brigade.  This units is mostly Warlord.  I like the kneeling and standing figures showing a salvo being fired, and the helmeted figures representing those making some effort to protect themselves while fighting amidst the swirling cavalry melees. (All Swedish musketeers were meant to wear helmets but it seems that most did without what must have seemed an unnecessary encumbrance for most of the time during a campaign.)

On the wargames table

Having a larger number of smaller units, compared to the more conventionally organised infantry (with a single pike block and two wings of musket), needs a better level of command, and the small units can be brittle.  However the Swedish brigades are very flexible, difficult to outflank, and can out manoeuvre more unwieldy opponents.  It produces a very interesting asymmetry between the Imperial and Swedish foot that can spice up a Pike and Shotte game. 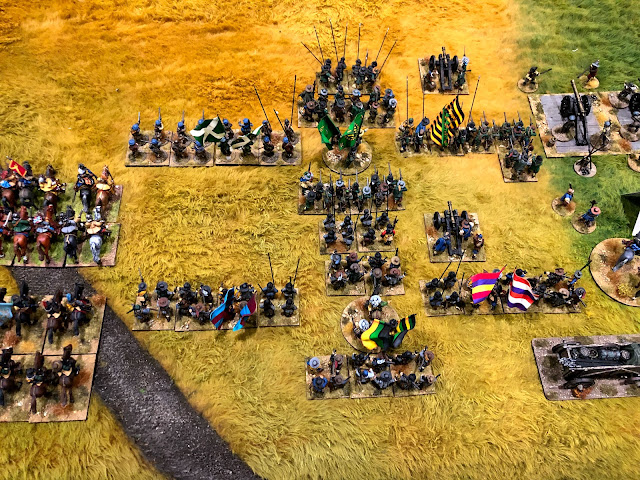 To represent the more experienced of the Swedish brigades at Lutzen (such as the Old Blue and Yellow brigades) I have experimented with adding P&S special rules such Drilled, Stubborn, and Salvo.  Other brigades, which fielded more men than the Old Blue, will also have larger, and potentially more, component units.

The commanded shot and light guns supporting the cavalry can be effective, but seem to be often left behind by their commanders in wargames who, at Lutzen, are in a hurry to capitalise on the Imperial weakness in cavalry numbers early in the battle before they are reinforced. 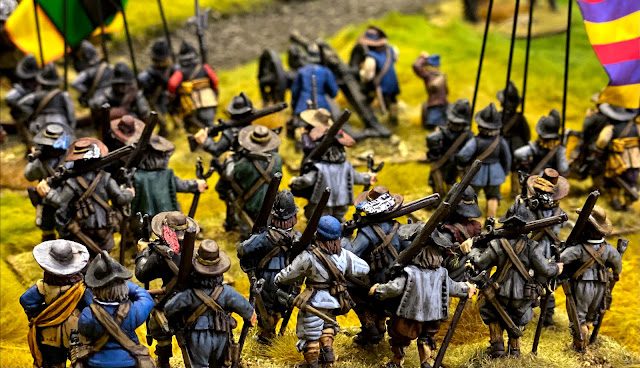 I would be interested in any other ideas people have for representing the Swedish brigades on the table top.