As the 'go live' date gets closer certain requirements can suddenly surface.  One of these was caused by me thinking "what will all of the big guns sit on?".   I have collection of painted heavy artillery pieces for the Swedes and the Imperials, but I didn't have enough artillery bases to put them on.  I could just do a regular base, but I am rather taken with the idea of having my big guns on wooden platforms.   These were used for the normally fixed batteries of heavier guns to provide a more stable platform for firing and to prevent the guns getting bogged down.

The Warlord "Ordnance Battery" boxed set (link) has some nice resin cast gun platforms, which I have, but I needed a whole bunch more and so decided to fashion some simpler ones myself. The canteen at work provided the planking; wooden drink stirrers seem to be a perfect width for planking.  Here is everything I needed to make the bases. 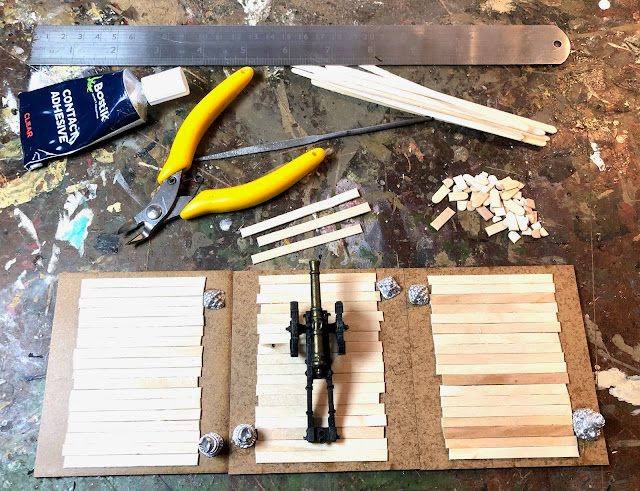 I started with MDF squares (these from Warbases).  Width 90mm x length 100mm seems to work best to fit a gun with some crew around it.  I cut the stirrers into lengths, about 70mm, using clippers.  I then glued these down to the base.  I used a contact adhesive for speed of drying. 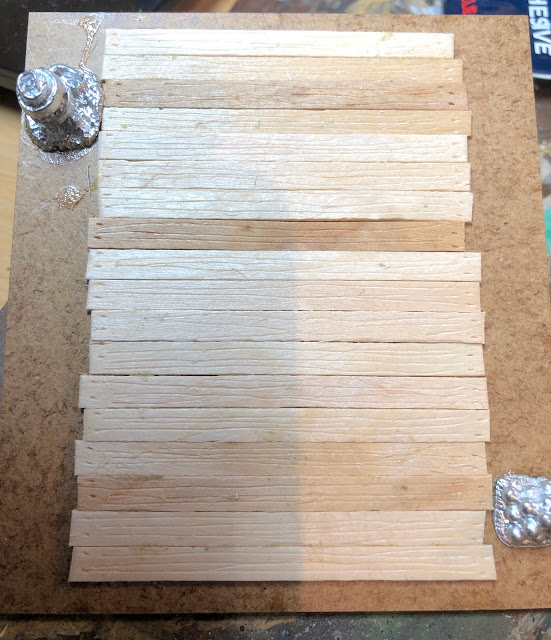 I also added some decorations to each base; a powder barrel and a pile of canon balls.  I think these are either The Assault Group, and/or Warfare Miniatures.  The stirrers were a bit plain so I used a file point to scribe some grooves and nail holes in the planking. 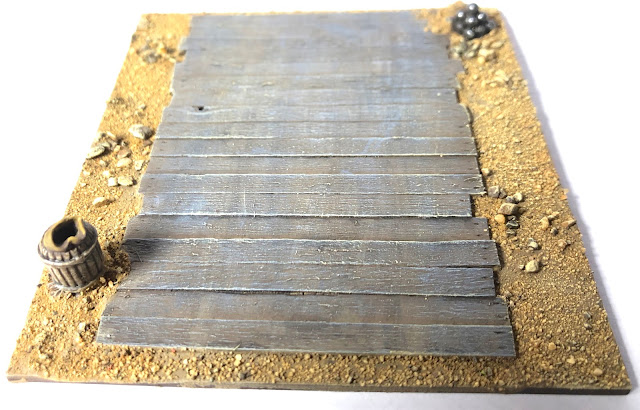 I then added my normal paint, sand, PVA, and filler mixture around the planking.  I painted the planking a dark earthy colour as an undercoat (Humbrol Matt 29), and then dry brushed mid grey to give an aged and weathered wood effect.  Next a wash of Army Painter dark tone, followed when dry with a light dry brush of light grey.  When the ink / paint was still moist I ran the wrong end of a paint brush along the planking to try and give the effect of gun wheels being moved across the planks. I then dry brushed the surrounding mud/earth with beige to finish.

Still need to add some flock, but I am quite pleased with these relatively quick artillery bases.  Your artillery crew will thank you, and I'm sure you'll roll better when firing from a steady platform like this!

Another week of preparations for Lutzen at Salute.  The focus this week has been on some of the buildings which will help to form the backdrop of the battle.

As I mentioned in a previous post (https://theviaregia.blogspot.com/2019/01/progress-on-all-fronts.html) the Lutzen windmills are an iconic part of the battlefield, and we are planning to have three models to represent them on our miniature battlefield.  We are using the Sarissa windmill model.  Now a complete windmill is alright, but I also wanted to show a partly dismantled windmill to represent the possibility that the Imperial troops scavenged materials from the windmills.  So, I ordered an extra Sarissa windmill, and went to work on making it only partly built, easy!

I left off the top floor and the 'sails' and left the bottom floor open to the elements.   The mdf kit is made to look like it is made of planked walls, so I altered these to make it look like some planks had been removed, giving an irregular/wrecked look.  I also carved the inside walls (normally not visible) to show the plank effect inside as well.  I then used bits of the mdf sprue and off cuts to represent the wood that was in the process of being removed.  I put some piles in the building, and made up some neat stacks to put on the base, as if they were ready to be taken off for some important Imperial purpose. 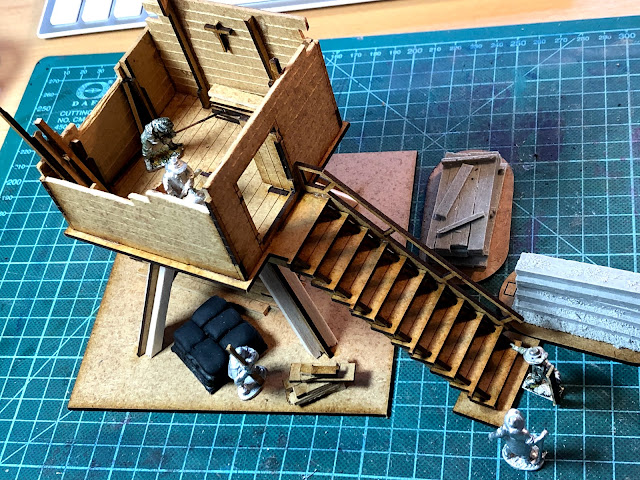 This is the final model before priming.  It looked a bit empty without anybody actually ransacking it,  and so I raided the pile of odd artillery crew and other open handed figures in the lonely corners of my lead mountain.  A few light conversions later and I had a motley wrecking crew.  Dixon, Warlord and Perry figures I think.  I also found some resin cast piles of planks in the bits box which looked like they would fit as related scatter terrain.  The terrain then got a prime of Humbrol Dark Earth spray, and the figures a black undercoat.  I've painted up the windmill to match the completed 'whole' model;  dry brush of grey on the exterior, washed with Army Painter dark tone, and dry brushed with lighter grey.  I've used a sand colour to represent the freshly sawed/broken wood, and the wood from the interior of the building.

As well as the windmills, many of the pictures of the Lutzen battle show the 'Miller's House'.  This was next to the large Imperial artillery battery, so close that at one point members of the Swedish Green brigade were supposedly able to shelter behind it from the fire of the battery.  I have used one of the lovely 4Ground timber framed cottages as the building.  I have added some temporary fortifications around the building to help in its defense.  These defenses are made up of scraps of MDF, some resin barrels, and some of the great collection of Warfare Miniatures' accessories.  There are gabions, fascines, wooden chests, and even a table and chairs. All glued down to a Warbases terrain base.    I have left out windows (assuming they would be knocked out to provide good fields of fire), and also added some holes in the roof for more firing positions.  It should be a tough nut for the Swedish attackers to crack! 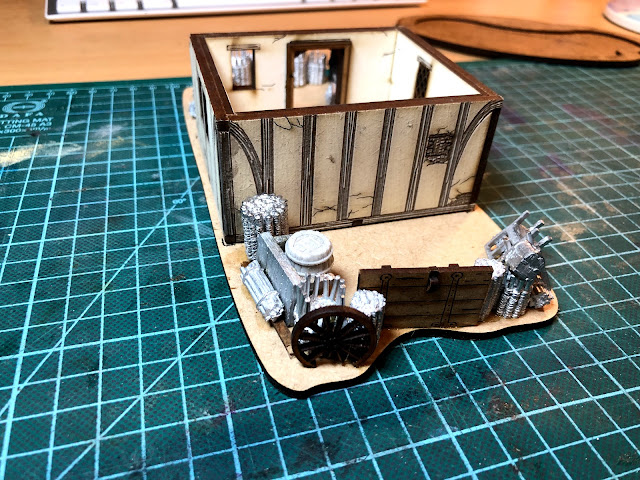 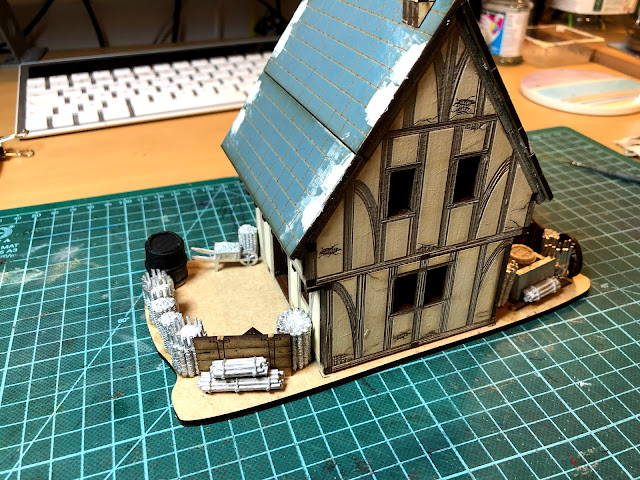 Here is the model, once again before it was primed.  I really like the superb array of mdf building we can now use, but the one thing that I am not too keen on are the roofs.  I have started using tiling sheets from Warbases to tile the roofs.  This looks great, but is a real time hog - very fiddly.  I also ran out of tiling so have more on order.

A final note, not entirely related to Lutzen.  I can't remember the blog/podcast/YouTube video in which I saw this mentioned, but I have heard that the GW shades/washes are slightly different to the Army Painter ones; they apparently wash in to the crevasses and do not stain the overall colour so much as the Army Painter washes which are closer to stains.   I have bought a box to experiment with.  They do seem nice to use, and seem to work as described.  I haven't performed any scientific comparisons, though. Any one else any thoughts on this? 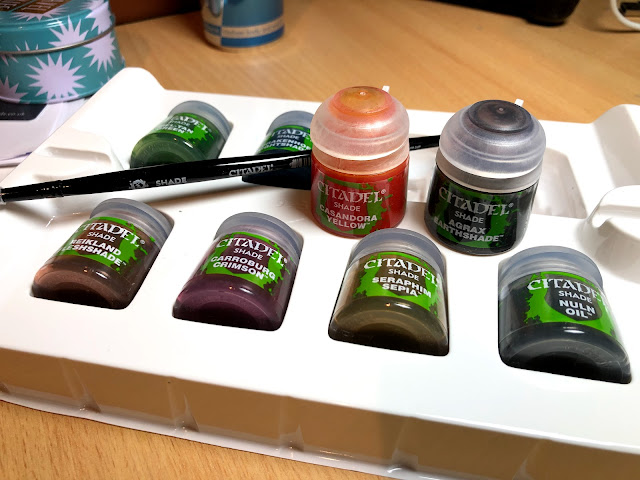