In this blog post I provide an update on my Peninsula 1811, Sharp Practice (SP), project.


In my last post on this project (here) I had built my first box of Perry’s 28mm plastic French and started painting. Since then I have made steady, if not stunning, progress. I have completed four small units, three French and one British. Based on this I have established a painting method that I’m happy with and that’s what I’m going to go through in this post.

I have been continuing with GW Wraithbone (‘beige’) primer followed by a GW Agrax Earthshade (‘dark brown’) wash. On this foundation I have been adding a base colour and a single highlight for some colours, and in some cases used GW Contrast or further washes.


Here is a summary for the French:
(Base colour followed by highlight or other process as appropriate)


I did buy some new, finer, snips for this post-painting snipping process so I could be as careful and accurate at this stage as possible. These Tamiya jobs are very nice and do the job.

Here are some of the finished figures. 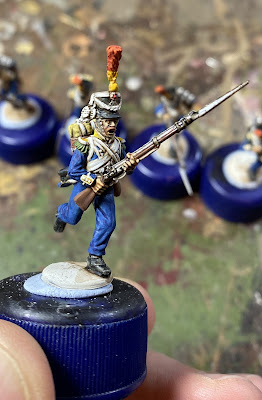 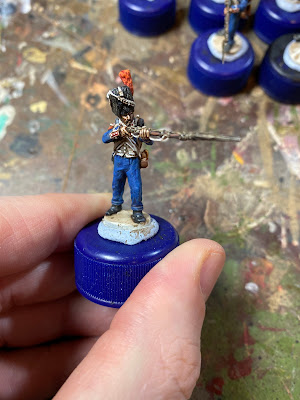 After varnishing it’s on to basing. I asked the Twitter community on suggested basing for Sharp Practice.  Using UK one pence pieces, and sabot group bases seemed popular, so I’ve gone with this approach.  Once the figure is glued on to the penny, a filler, PVA and Humbrol Dark Earth mixture is thickly painted to the cover the base, and sharp sand sprinkled on to the mixture.  That’s left to dry overnight and a dry brush of VMC Beige added.  (Final touch will be flock and grass tufts but I haven’t decided on colours for the Peninsula yet. )

Overall I’m pleased with the final result. Still room for improvement, but these will get me going.

As well as the French I’ve also done a practice unit of British. These are from the 43rd Monmouthshire Light Infantry.  The 43rd were the opponents of the 2em Légère at Sabugal and so they will make up my two SP forces.  The 43rd are Perry 28mm metals.


Next for this project will be trying to complete the two basic SP forces. I’ve also acquired some plastic Perry British Light Dragoons and some Perry metal Portuguese Cacadores.