Work continues in readying troops and terrain for the Lutzen game at Salute 2019.  The first part of the week was taken up finishing off Swedish & Allied foot.  These are from the last foot brigade in my to-do list, Duke Wilhelm's brigade.  Just the command groups shown here, as I love those flags.

Figures are a mixture of Warlord, Perry and Foundry.  Flags from Flags of War.  I do need to flock the bases, but I'm still feeling pleased that all the foot I need to do are pretty much ready.  On to the long list of cavalry (oh, and artillery)!

There is a nice variety of cavalry types at Lutzen; from the fully armoured cuirassiers, to skirmishing Croats.  However there are a lot of the in-between types.  On my to-do list are a lot of harquebusiers; so, medium-ish, sword and pistol cavalry.  On the work bench (or tray) are two units of Protestant German harquebusiers just about ready for flags and bases.  These will be Duke Bernhard's Leibregiment squadrons.

Not much on terrain this week.  I have ordered a second windmill from Sarissa.  This one will be part dismantled; the Imperials troops using the handy materials to help fortify their position.  I have also ordered a large swathe of faux fur for the terrain cloth.

Finally, we have been starting to think about how the wargamers will look at Salute, as well as the wargame.  We have had 'club shirts' in the past, but it has been a few years and we have had new members since the last order.  I decided to investigate a new supplier.  I ordered a polo shirt from Saddle Goose Designs (https://www.saddle-goose-designs.co.uk/) and had one in my position in super-quick time. 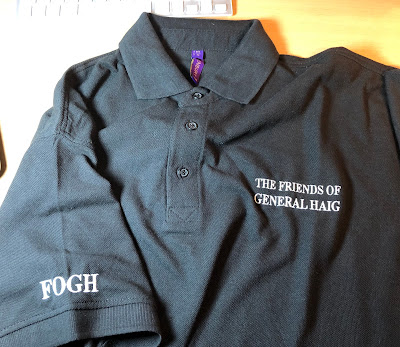 Apologies for the rather poor picture.  This is a really nice shirt, and Deb at Saddle Goose is very helpful in giving options for designs and shirts.  After showing off the shirt at the club meeting on Saturday, I am now gathering details from the other 'Friends' to put in a bulk order.  Hopefully those of us demo'ing the game at Salute will be very smartly attired.

I'm pleased to say there has been another week of positive progress.  The three of us providing the troops for the two armies have finalised an order of battle that should fit on the table when turned in to wargames units, and agreed who is providing what.  It is good to have a definite target.  We have also set a date for our first dress rehearsal at the end of Feb.  Looking forward to getting the troops on the table!

This week I have been working on infantry again.  First some Imperial ensigns. (Still need to do the bases.) 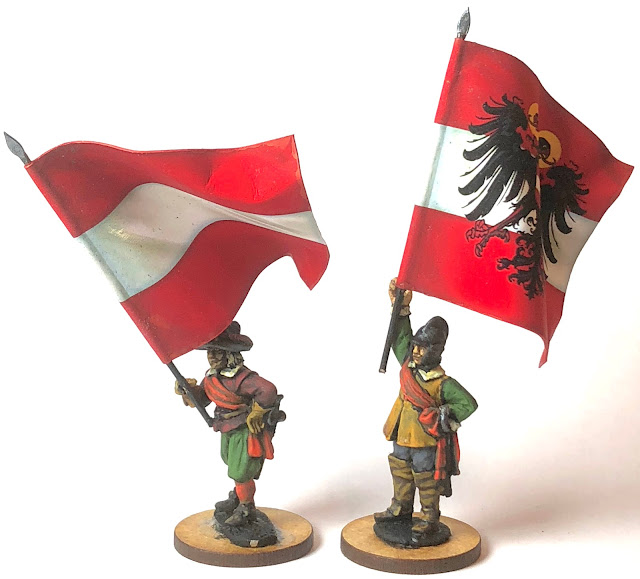 One figure from The Assault Group (TAG) and one from Perry.  The Flags are from Flags of War.  I have just ordered a bunch more of the Flags of War Protestant/Swedish and Imperial ranges. The flags are definitely one of my favourite things about the look of this period! 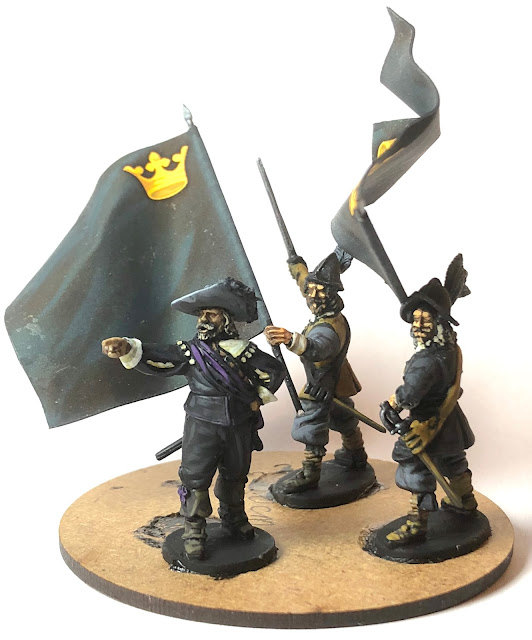 This is a command base for Thurn's brigade.  The two ensigns are from Warlord Games' plastic Pike and Shotte box set.  I have tried to show them flourishing their colours (Flags of War again.)  The general figure is from Avanpost.  (I am producing a command base for each of the Swedish/Protestant infantry brigades.) I ordered a small selection of the Avanpost TYW range last year.  I am really impressed with the standard of sculpting and casting of these resin figures.  The resin does make extraneous details (e.g. sword scabbards) brittle and therefore relatively easy to break, but I am willing to put up with this for the lovely figures.  Scale wise they fit very nicely with Perry/Warlord/TAG.  So far I just have one or two of the Avanpost figures sprinkled among my units.

As well as working on the troops I've also been considering the playing surface.  'Teddy Bear' fur (or Faux Fur) surfaces are very popular at the moment, and I have been wanting to give one a go for sometime.  The main thing holding us back has been the size we need.  We are aiming for a 10' by 6' surface.  We haven't been able to find a suitable material available in a width wider than around 5'.  This means two pieces would need to be joined together.  I have been been experimenting with how to do this.  Here is a small scale practice piece.  The two bits of faux fur have been clued on to a piece of calico.  I'm hoping that brushing the fur across the gap will minimise the visibility of the gap.  I'm quite pleased with how this has turned out, so far.  A useful learning point; make sure you have the nap of the material lined up the same way in your two pieces! 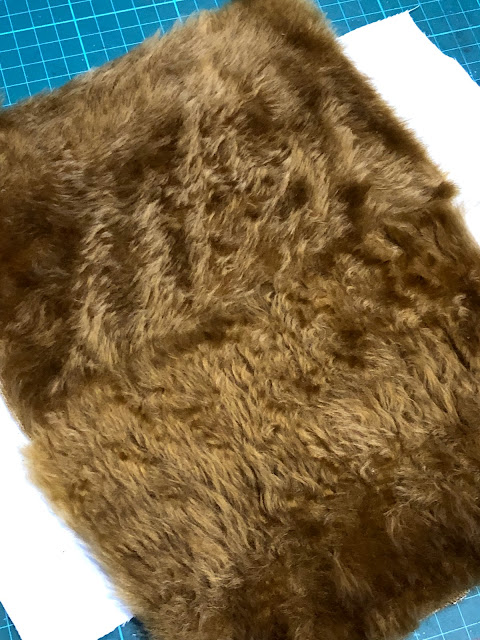 I need to splosh some paint on to make sure I'm happy with the how the material colour works with the paints, and then I will buy enough material for the whole surface.  I'm hoping that greens on the brown fur will work, plus a selection of different brown shades.  There are many good tutorials on the web for how to tackle this sort of cloth, and I'm following Barry Hilton's experience at the League of Augsburg blog. See http://leagueofaugsburg.blogspot.com/2018/08/lazing-on-sunday-afternoon.html

So that covers the Flags and Fur; so what about the Formations?  One of the really distinctive things about the Gustav Adolphus' infantry in this period is the Swedish Brigade formation.  Developed while fighting the Polish armies, strong in cavalry, the formation is meant to allow for good all round protection, as well as allowing the infantry to make best use of their fire power. 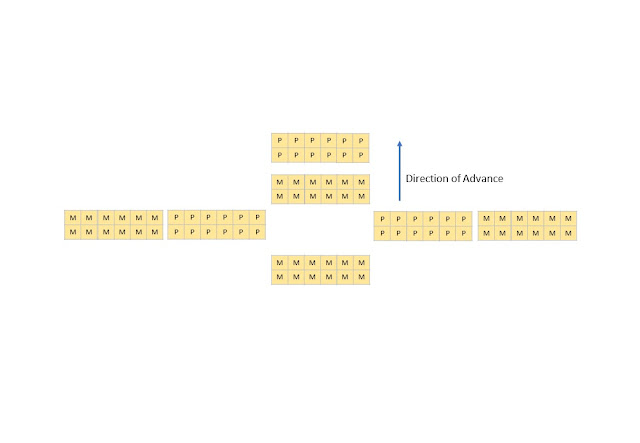 The formation looked something like this. 'P' representing pikemen, 'M' those armed with muskets.  I have always found this formation fascinating.  However, the Swedes abandoned this rather complex formation after 1634 and followed the standard formation, used throughout Europe, of a single block of pike with two sleeves of musket.  Did it require very experienced and disciplined troops that were lost after the first few years of combat in the German states?  Prince Rupert was prepared to argue for its use by the inexperienced Royalist army at Edgehill, but it doesn't seem to have been used by any ECW forces after this.  Collecting the forces for Lutzen is the perfect opportunity to investigate this formation on the wargames table.

There are quite detailed breakdowns of the pike and muskets per regiment and per brigade for the Swedish foot at Lutzen (see Osprey Campaign, Lutzen 1632 - Climax of the Thirty Years War).  Based on this we have reconstructed the brigades as Pike and Shotte wargames units. 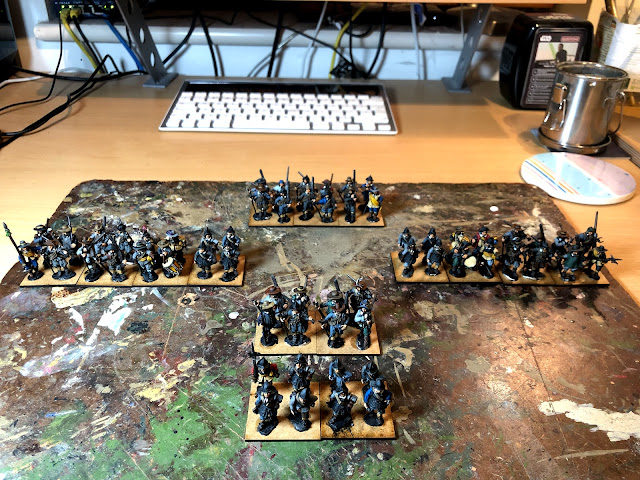 You can see here Wilhelm of Hessesn-Kassel's brigade set out while waiting in the basing queue. At Lutzen the Swedish brigades were all short of pike.  It is thought that many infantrymen preferred to carry a musket than a pike. The formations are therefore shot heavy and pike light. The brigade is led by a small unit of pike, followed by a small unit of shot.  The two wings are large combined units of pike and shot (mostly shot).  We will try treating these as shot units with some advantages of a pike unit (e.g. The Pike Company special rule in Pike and Shotte). Finally a reserve of a regular unit of shot.

As we are using Warlord Games' Pike and Shotte rules we can cope with these separate units.  I am expecting the brigades to need good command, and careful handling as the small units will be brittle.  This should be an interesting contrast to the Imperial infantry using brigades formed in to a single pike block with two sleeves of shot.  Play testing will be required to test and tune this with the Pike and Shot factors and special rules.

Progress On All Fronts

Preparations for Lützen are progressing on all fronts.  Every available shelf and surface is devoted to terrain and units being finished off for Salute.

One of the famous landmarks for the battle is the group of windmills, near which the Imperial army’s main artillery battery was set up.  It is always nice to have some ‘vertical space’ on the table and so we have to include these.  To represent the windmills we agreed on the Sairssa mdf model.
https://sarissa-precision.com/collections/old-europe-28mm/products/postwindmill

We plan to have two complete and one partially dismantled.  Each is an impressively sized model and so we decided to keep the number to three rather than risk taking up too much space with what is in effect ‘back drop’.  Some accounts say that some, or all, of the windmills were dismantled by the Imperial troops to help construct the artillery fortifications.  We’re giving a nod to this by having one partially dismantled. 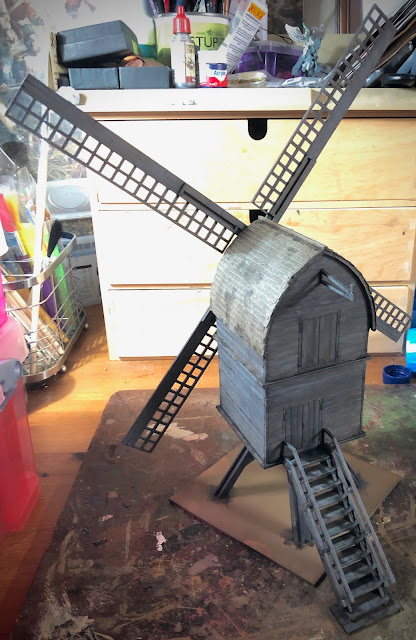 Here is the first of the windmills;  painted up.  I have added Warbases roof tiles to the roof.  Still some details and basing to be done.

There are also lots of troops underway.  Here are some of the units recently through the ‘basing workshop’ and now ready for flocking. 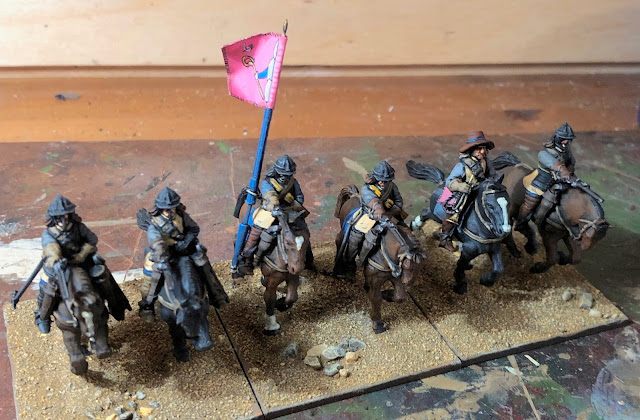 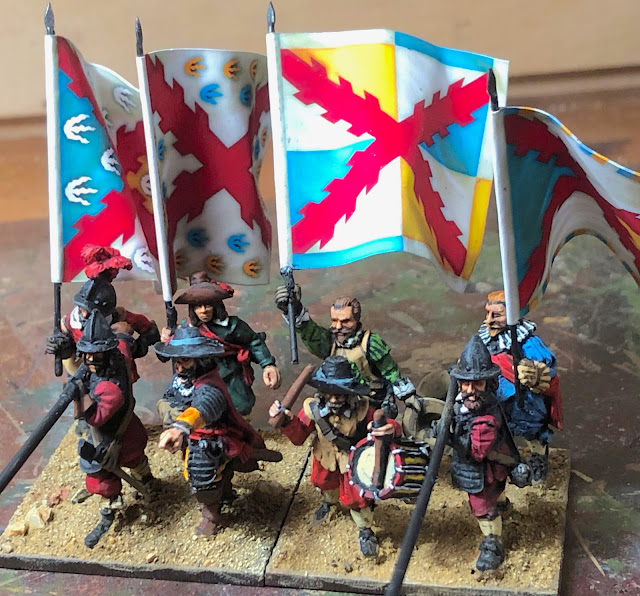 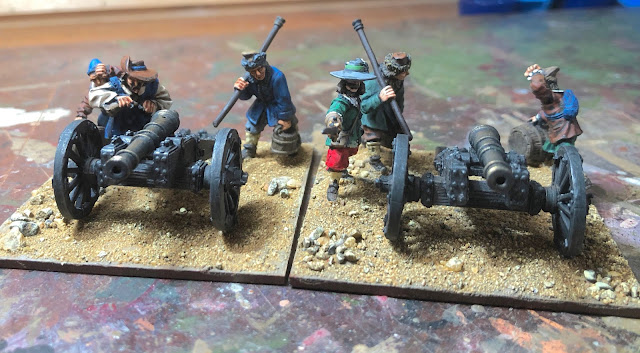 Swedish Light Guns.  Warlord.  I am going to need quite a few of these.

It’s not all work, work.  I have treated myself to a late Christmas present, The Pieter Snayers, Battle Painter book, translated in to English. 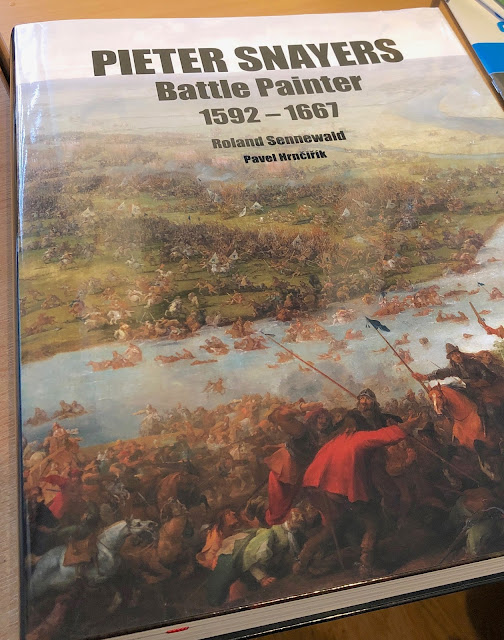 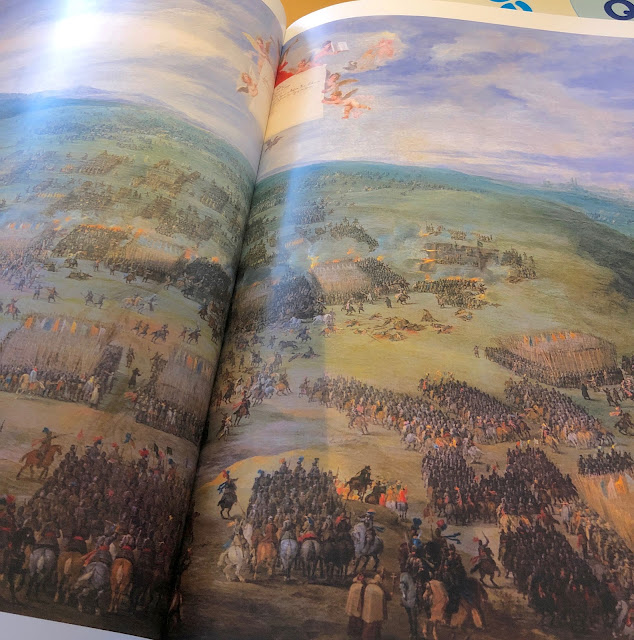 Wow.  A beautiful and fascinating book.   Pieter Snayers was a contemporary artist who painted many of the famous continental actions of the early and mid 17th century.  Each picture is full of detail which is fascinating to the TYW wargamer.  I will try and write a proper review once I have stopped leafing through it, with a silly grin on my face, saying “wow”.

The Swedes Are Off The Blocks 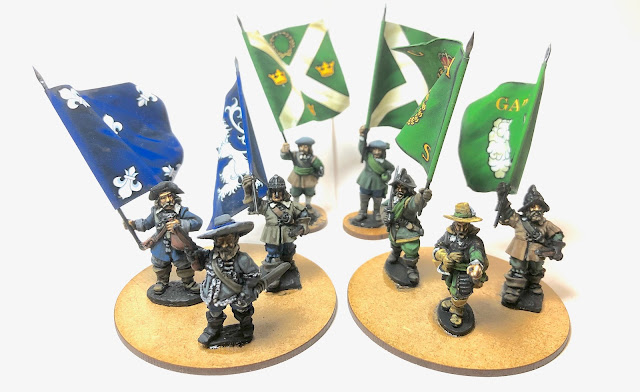 Well, Germans I suppose, rather than Swedes, but these guys are the first of my figures off the production line for the Swedish / Protestant army.  I am starting with the Old Blue and Green Brigades for the Protestant foot.

The guys in blue on the left are: Oberst Hans Georg aus dem Winckel and ensigns from Winckel's (Old) Blue Regiment.

The guys on the right are: Oberst Georg Wulf von Wildensteinand ensigns from Obstit Johann Winckler's regiment in the Green Brigade.

The guys in the background are Ensigns for Leslie's Scots Regiment in the Green Brigade.

Figures are a mixture of Warlord, Foundry and Perry.  Colours from Flags of War. 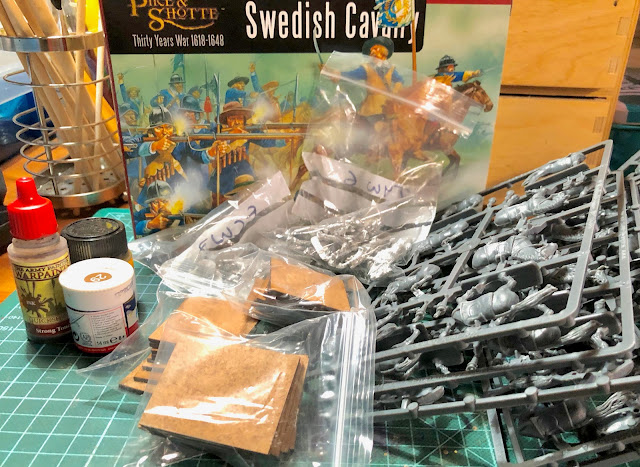 This blog will trace the journey of a band of intrepid wargamers as they prepare to recreate the battle of Lützen at the wargames extravaganza known as Salute 2019.


Why the Via Regia?

We hope you will join us on our virtual journey, along the Via Regia, to Lützen!

We will be sharing regular updates on the progress of our preparations.  We would love to hear your thoughts and suggestions so please feel free to add a comment below.