This blog post introduces a new project that I’m starting in 2020.

I haven’t made a blog post in a while but I have started the New Year with a flourish of new hobby projects.   In the past couple of years I have restricted myself to one project at a time.  This year I have decided to keep several things on the go to try and prevent the dreaded ‘burn-out’ due to losing interest in the project at-hand.  I’m hoping that by having a few different irons in the fire, so to speak, that if interest in one project wanes, then I can switch to another to keep going.

So what are these new projects?  The first new project that I'm covering in this post involves moving forward from the mid 17th century by about 150 years to 1811, and also moving from Central Europe to the Iberian peninsula - Napoleonic Peninsula!  A bit of a classic, but not something that I currently have any armies for.  I’ve loved this period since I first saw ‘that film’ when I was 11.  I’ve read a lot about the 100 days campaign, and also been inspired by the tales of Sharpe, Harper and friends in Portugal and Spain.  I don’t think I could stretch to another big battle game while I’m doing this for Poles and Swedes in the 1620s, and so I wanted to do something smaller scale - a skirmish.

About 18 months ago I came across the Too Fat Lardies rules, Sharpe Practice.  There was a very engaging play through on the Beasts Of War website (here).  I was intrigued enough to buy the rules and some command cards.  We played a couple of run throughs at the local club and found the system really interesting.  Very different to other sets of rules we’d tried, but with absolute bucket loads of period character.  The rules were promoted to the “must play again” pile, but have languished while other things took centre stage.

This changed at Christmas when one of my gaming buddies, in an attempt to re-kindle my Napoleonic fervour, bought me a box of Perry’s plastic 28s Early French Elite Companies .  He also bought me a selection of Perry’s metal British Light Infantry.  As soon as I opened that box of plastics I was hooked. Gosh, those chaps are talented - even on the sprues I could see the figures were works of art.  I was starting to see a mental picture; a dusty Spanish village simmering in the summer heat, a foot-sore French column marching down the road, but what’s that in the shady olive grove, is it a section of British light infantry ready to spring an ambush?! 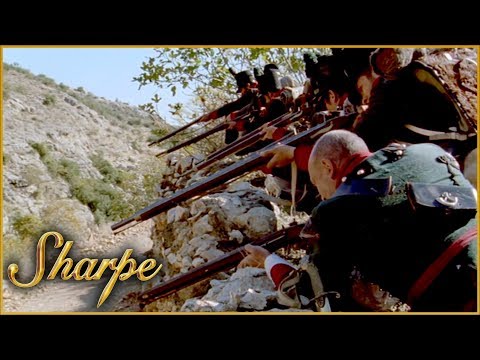 I find it easier to splash some paint on the figures if I have made a basic plan for the units I’m painting.  I therefore used some time over the Christmas break to do some research.  I wanted to have units from the British Light Division, in the Peninsula, and some French opposition.  I therefore started searching through different actions that the Light Division took part in.  I became intrigued by the action on the river Coa, 3rd April 1811, at Sabugal.  There is a very nice description of the battle here.   There was a great performance by the 43rd (Monmouthshires) and set against them were French Light Infantry including the 2nd Légèr.  Now, I didn’t intend to recreate the whole battle, but the orders of battle gave me some historical units on which to base my little collection, and some context for the planned tabletop actions.

Some internet searches, and a borrowed Osprey or two, showed that I could use the Perry Elite Company box for the 2nd Légèr (who wore the longer tailed coat like the line regiments at this time).  The Carabinier (the name of the Grenadiers in the French Light Infantry) company also had bearskins, and the Voltiguers could wear the tall plumes, all provided as options in the Perry’s plastic box.  The 2nd Légèr could look terribly dashing!  After re-reading the Sharpe Practice (SP) rules I worked out that the one box of Perry’s plastics would give me a small starter force for the French, and my few boxes of Brits would be a good start of a similar sized opposing force.  I was all set!

Building the Perry plastics was a bit of a chore, but the end result is worth it.  It requires a bit of thought to end up with the sets of figures you want, and the complexities of Napoleonic uniforms are a bit mind boggling.  After a couple of sessions I had 5 units of French built for Sharpe Practice with some accompanying officers and NCOs.  It was at this point that I realised that I have never painted 25 or 28mm Napoleonics!  (We were all playing 15s last time I collected Napoleonics.)  I did remember that Napoleonics have a lot of white on them, and I could see the these plastics figures had loads of detail.  I therefore decided to try a white/light undercoat.  My recent experiments with a light undercoat and GW Contrast paints had given me some ideas.

I used the GW Wraithbone spay undercoat and then gave the figures a wash of GW Agrax Earthshade. I took a tip from a budy of mine who has done a lot of plastic Napoleonics and left the heads and packs on the sprues for painting.

Another really nice touch with this boxset is that it has very detailed painting guide included which would get you started if you were not worried about portraying an exact unit.  I still needed to do some extra research as some units, like the 2nd Légèr, had their own idiosyncrasies, and I enjoy going that little bit further so that I can really feel that I am bringing a particular unit back to life on the table top.

I have started the colours with mostly Valllejos, but have used Contrasts for the odd detail here and there.  I plan to block out the base colours and then highlight up.  A fairly watered down Vallejo Dark Prussian Blue seems to work nicely for the coats and trousers, and seems to give a bit of shading over the Wraithbone/Earthshade combo. 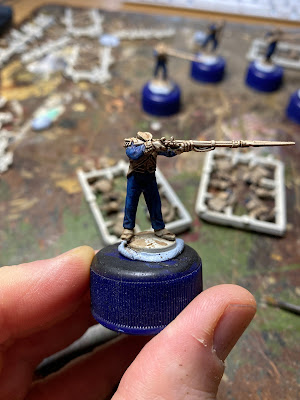 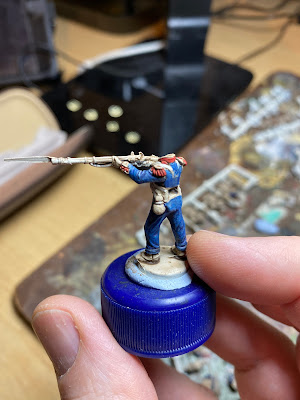 That is it for now.  Next time I may introduce another of my new 2020 projects, I may go back to my Poles and Swedes, or may be I’ll finish off some of the 2nd Légèr.  It will be exciting to find out :-)