In this blog post I cover a new addition to my Polish-Lithuanian Commonwealth army, a unit of Polish Haiduks.

My painting progress over the summer and autumn has been almost nonexistent and so I am really pleased to be back in the saddle, so to speak!

Haiduk (or Hajduk) was a term used in this period for native Polish and Hungarian infantry. They were armed with muskets and provided fire support to the cavalry arm in open battles, as well as providing the ability to hold fortifications, or indeed assault enemy fortifications. Along with their firearms they were equipped with sabres and hand axes, which they used when involved in hand to hand melee.  They were typically uniformed, and their coats (called a zupan) were usually lined in contrasting colours. The Haiduks therefore provide a distinctive and iconic part of any Polish force, and I have been looking forward to getting some of these on the painting table since I started my Polish army.

The Polish infantry were recruited, like the cavalry, through the issuing of a commission to a Rotmistrz.  The Rotmistrz had to recruit the required number of  men as instructed in their commission, and they typically did this in their own home region, looking for volunteers amongst the townsfolk and peasants. The infantry were formed in to banners (companies) with a set of officers, and each tenth man was armed with a long axe or halberd. These tenth men acted as NCOs, directing the rank and file, and were also meant to act as a defence against cavalry with their pole-arms. 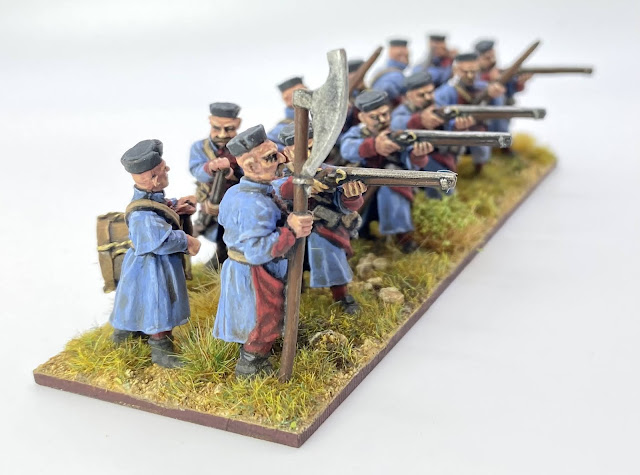 My 28mm miniature Haiduks have been recruited from Wargames Foundry and The Assault Group (TAG).  Like their Hussars, the Foundry Haiduks are a very old range, and so a little on the short side being closer to 25mm than 28mm, but they fit in ok with TAG to my eye. The details on the Foundry figures hold up well; all part of the Perry sculpting genius!

As well as a tenth-man with his halberd, I have also added a drummer to the unit. Various types of musicians are shown in Haiduk units including fifers, pipers and drummers.

This first unit is painted up in one of the most common colour combinations shown for Haiduks in this period; a lightish blue coat with deep red lining. I want to acknowledge the fabulous painting tutorial by Sonic Sledgehammer that I used as inspiration for this unit, after I saw Troy painting a TYW Bavarian musketeer in just the shade of blue I wanted to use (see the tutorial here: https://youtu.be/ZqpHAV_A1U0). 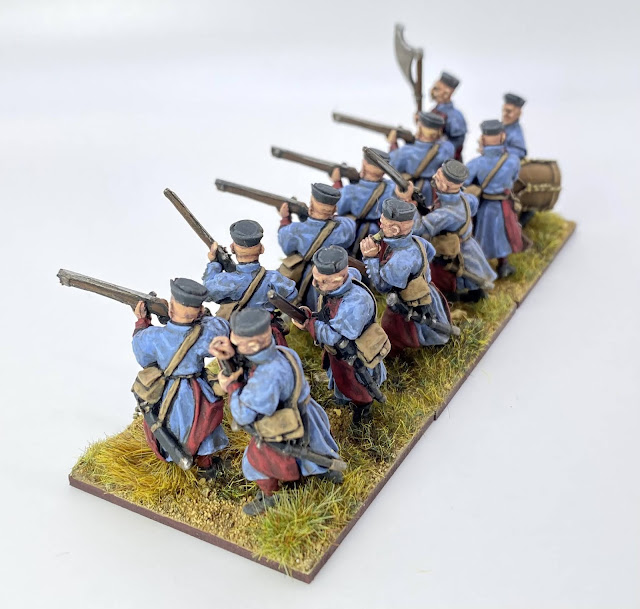 I plan to add a few more units like this to the army, and also some separate command bases. The Stockholm Scroll (https://commons.wikimedia.org/wiki/Category:Stockholm_Roll) shows a number of Haiduk units, with a variety of uniform colours and I hope to represent these with the future units.