The Fury of Lions

"With the fury of lions the Upland, Smaland, Finland, East and West Gothland regiments rushed a second time upon the left wing of the enemy ..." from Friedrich Schiller's History of the Thirty Years War.

This passage from Schiller's history describes the second, revenge attack, supposedly mounted by the Swedish right wing of cavalry at Lutzen following the death of King Gustav Adolf.  The King's cavalry were certainly his main strike force, intended to defeat the opposing enemy cavalry before turning in on the now undefended flank of the enemy infantry. 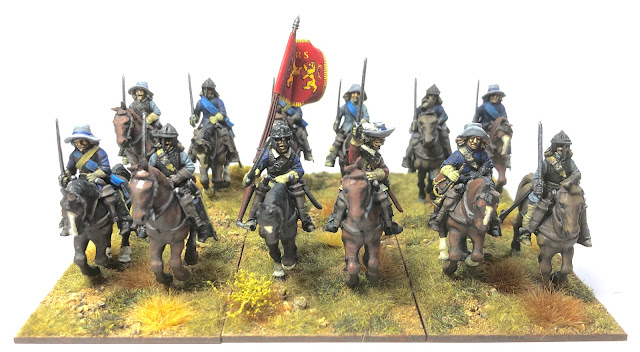 At Lutzen, while most of Gustav Adolf's cavalry were German, his lead, strike, squadrons were made up from his own Swedish horse.  I have chosen to model this unit as one of these Swedish regiments, the Uppland regiment, led by Overstelojtnant Isaak Axelsson 'Silfversparre'.

When the Gustav Adolf became king he inherited an uninspiring mounted force.  The cavalry were poorly mounted and equipped.  In his first campaigns, Gustav Adolf's cavalry were also were facing, in the Baltic, some of the most impressive cavalry at that time, the dreaded Polish Winged Hussars.  Gustav set about improving the cavalry as he did with the rest of the army.  He supplemented them with experienced mercenaries, improved their equipment, and mounts, and tried to give them an edge over their opponents by deploying blocks of commanded muskets with the cavalry.  When the Swedes landed in Northern Germany and joined the Thirty Years Wars the cavalry were still seen as inferior to the Imperial cavalry, especially the mighty cuirassiers.  At Breitenfeld in 1631 Gustav Adolf proved that, with their commanded muskets, organised reserves, and aggressive charges, the Swedish and Protestant cavalry could defeat their Imperial counter-parts. 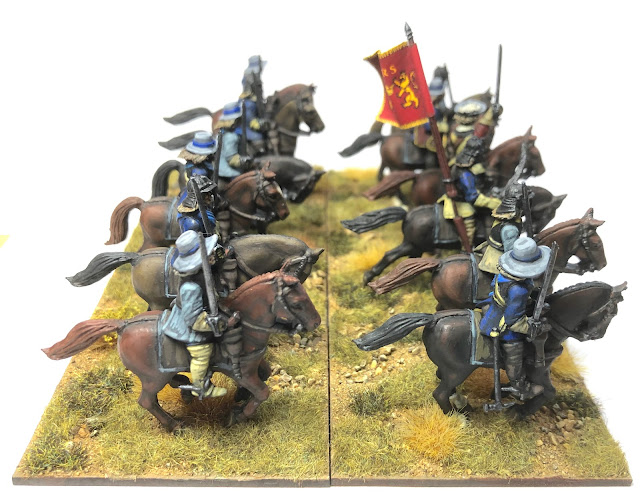 By the time of Lutzen the Swedish cavalry had no doubt further improved their mounts, but were still more lightly equipped than the best of the Imperial cavalry.  They had tough day at Lutzen and on the Swedish right wing ultimately failed to break the opposing Imperial Cavalry, and despite Schiller's inspiring prose, were themselves eventually thrown back exposing their own infantry.

This unit is, unusually for me, made up entirely of figures from a single manufacturer.  In this case I have used the Warlord Games Swedish Cavalry box set (link).  The Warlord plastic cavalry sprues allow a nice variety of equipment, and in this box are accompanied by two metal mounted command figures, a cornet strapped to his standard, and an officer.  The cavalry are nicely mounted on good, large horses, probably acquired since landing in Germany the year before! 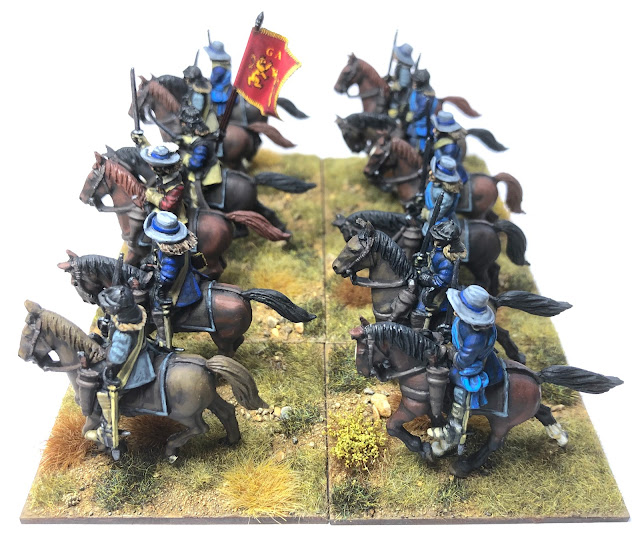 Even by Lutzen the Swedish horse were still apparently short of armour and the King suggested that at least the front rank should have metal back and breast plates.  I therefore have most of the armour concentrated in the front rank of figures.  A few have managed to acquire sleeveless buffcoats, but most have only their long, woolen, riding coats.  Their is also a mixture of helmets and soft hats.  I have chosen blue coats, but a mixture of blues, representing the troopers having been re-clothed at various times with various shades of cloth.

The unit is finished off with an Uppland regiment cavalry standard from Flags of War, and are based on trusty Warbases 50x60mm laser cut MDF 2mm thick bases. 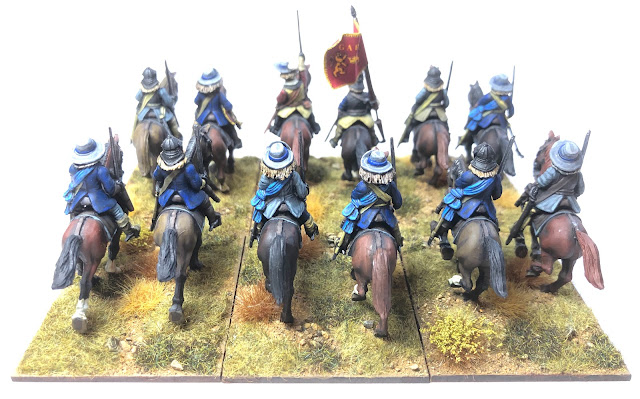 I hope that they will perform well at the Warlord Games Open day, this Saturday, in Nottingham (link), where they will be re-fighting Lutzen.  Will they be like furious lions, or like lambs to the slaughter?  I hope you'll be able to come along and see for yourself.

Can the Empire Strike Back?


In this post I will talk about the upcoming re-run of the Battle of Lutzen at this year's Warlord Games Open Day, on the 20th July.

Warlord Games Open Day is a regular event where the company throws open its doors for the day at its Nottingham headquarters.  If you are interested in Warlord Games' products or games then it is well worth a day out. This link is to a video on YouTube where Warlord supremo, John Stallard, gives a run down of the day.

I've been to the open days in previous years, as both a punter and a demonstrator, and I think they are a great idea.  If you are interested in any of the Warlord games then you will find most of them on show, and you will also be able to try your hand at them, or just ask questions of the experts.  A sort of "try before you buy".  Warlord make an awful lot of games now, and so there is plenty to chose from.  So whether you want to try out the old stalwarts like Black Powder and Pike and Shotte, or if you want to investigate the new games like SPQR and Black Seas, the choice is yours.

There are also talks by some of the game designers, so you can hear about how games were put together, and perhaps hints on plans for the future.  You can take tours of the HQ and see how Warlord operates, including the fascinating process of turning base metals in to shining white metal figures; magic in deed!  The icing on the cake is to pick up some goodies from Warlord, and there are normally some very good special offers.


Its not just Warlord there on the day.  There will be other members of the Wargaming glitterati in attendance, and some other manufacturers from the East Midlands 'Lead Belt'.

So what will the Friends of General Haig be doing there?  Well, to followers of the blog it will come as no surprise that we are running the Battle of Lutzen, 1632, using Warlord Games' Pike and Shotte rules.  This will be a slightly modified version of the game run at Salute.  We have changed things slightly to enable us to let people at the open day join the game for a turn or two, so they can try their hand at Pike and Shotte and get a feel for how the rules work.


This proved popular last year when we ran the Battle of Auldearn, 1645 (link).  There were a number of people, interested in Pike and Shotte, who wanted to get a better understanding of the rules, and see how things really operate in practice.  Some were happy to just watch the action and ask questions.  Others took up dice and tape measure, and tried their hands at 17th century battling.

So, visitors on the day will be able to take part as either the King of Sweden, Gustav Adolf with his protestant alliance, or the Holy Roman Empire striking back under Imperial Generalissimo Albrecht Wallenstein.  We will have two big, 28mm armies thundering in to one another across the table top, ensuring there will be plenty of action.  The Friends of General Haig team will be on hand to discuss the game and rules with visitors, and also to help people take a a turn or two as a 17th century general.  There will be every weight of cannon, lots of pike, loads of shot, terrifying black-clad cuirassiers, and devilish Croat light horse.  Who could ask for anything more?

Tickets are available from the Warlord webstore here:
https://store.warlordgames.com/products/warlord-games-open-day-ticket-20th-july-2019

I hope very much to see you in Nottingham on the 20th July.  Just look for our battle sign. 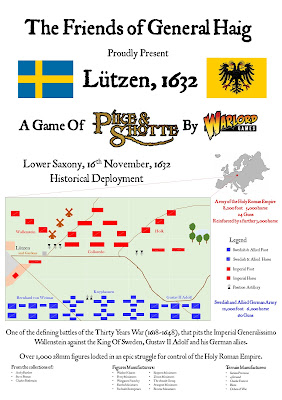 P.S. Throughout this post, the lovely Imperial command groups are made up from Warlord Games Thirty Years War range, all expertly brought to life by the talented brush of Matt Slade at Glenbrook Games (link).
at July 09, 2019 4 comments: