" ... it was so long since they had beene last beaten,
that they had by this time forgotten how to runne away."
William Watts, The Swedish Intelligencer, Part 3.

The Yellow regiment is probably one of the most famous Swedish TYW regiments.  Dressed in their yellow jackets they make a very striking appearance on the battlefield.  This was the King's Guard and Court regiment, with the first two companies forming his Life Guard.  At Lutzen they were commanded by Generalmajor Count Nils Brahe.

Count Nils Brahe was Colonel of the Swedish Yellow Regiment at Lutzen (1632).  He was made Generalmajor of infantry in 1632, and at Lützen probably commanded the four leading brigades, which included the Yellow regiment which made up one brigade on its own.

The Osprey Men-At-Arms on The Army of Gustavus Adolphus (1) Infantry (link) has a great picture of The Yellow Regiment in action, with Nils Brahe receiving the leg wound that would prove fatal.  (He died two weeks after the battle from this wound.). Nils Brahe was a rising star in the Swedish army. He had risen through the senior ranks quickly, being Generalmajor by the age of 28, and was a favourite of the King. 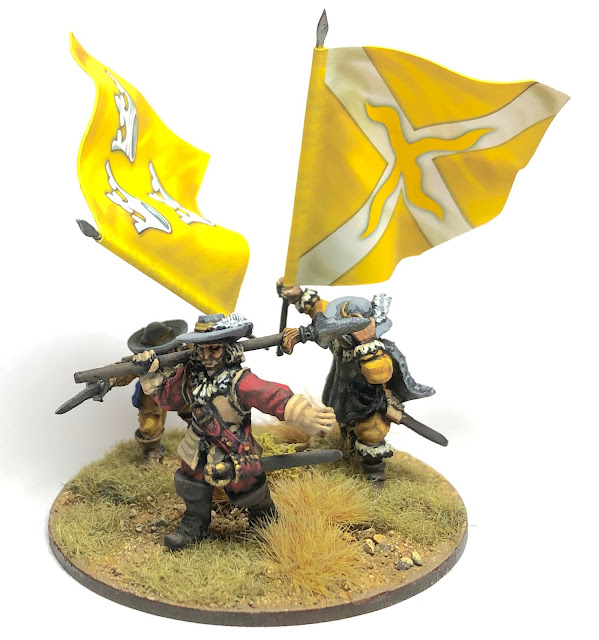 I have chosen to show Nils Brahe dismounted, leading his regiment forward. He is followed by two ensigns from the Yellow Regiment. I like the way that the ensigns are braced as if advancing in to heavy fire, which at Lutzen it is likely they were. Nils Brahe on the other hand is leading by example, bolt upright, coaxing his men forward.  He is finely attired, in a red suit, wearing a sleeveless buffcoat which was the fashion amongst wealthy officers on the continent.  His followers are clothed in yellow suits, as befits their regiment, and one is also wearing a grey cassock like those issued to the lifeguard  companies. 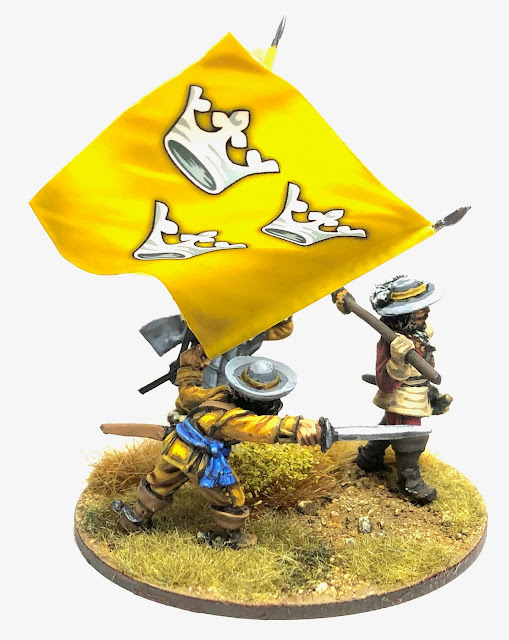 The figures are metal figures from Warlord Games.  Nils Brahe and the cassock-ed ensign are both from the Swedish infantry box set. I think these are both cracking command figures, and it’s a pity they are only available in the boxed set. The other ensign is actually from the Warlord Scottish gun crew.  His pose fitted well with the other ensign, and with a quick hat swap and hand change he was a perfect fit. 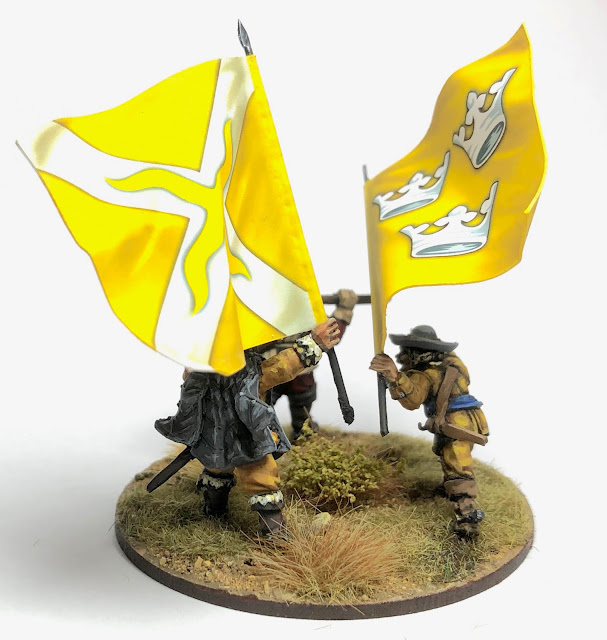 The colours are from Flags of War, of course!

I put all of my command on round bases, to differentiate from the troops on square bases. 2mm thick 6cm round from Warbases. 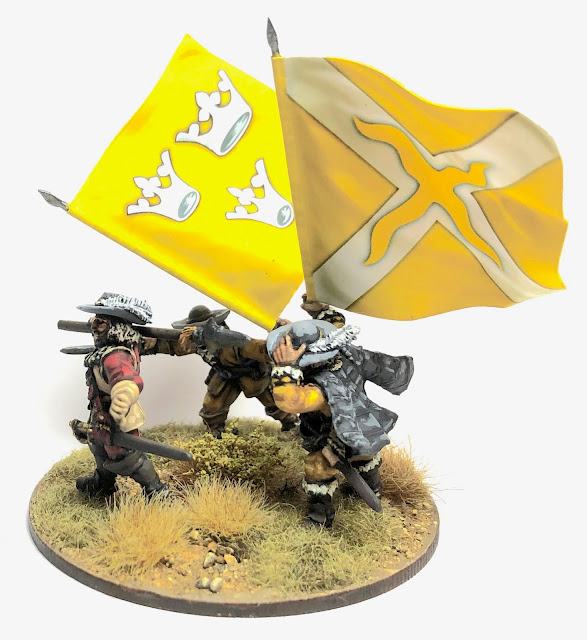 The Men That Will Undo Us

'As for those fellowes (meaning the Crabats) I care not for them', saies the King: 'but charge me those blacke fellowes soundly: for they are the men that will undoe us.'
William Watts, The Swedish Intelligencer, London 1633

According to this quote by Watts, of all of the enemy troops, Gustav Adolf was most concerned about the Imperial Cuirassiers at Lutzen.  In their three-quarter armour, blackened to protect the metal, on large, dark coloured horses, they must have been an imposing sight.  The Imperial Cuirassiers were Wallenstein's heavy strike force.  Very expensive to raise and maintain, but also very hard hitting on the battlefield.

I need more of these armoured cavalry for my own Thirty Years War (TYW) collection, so the first thing on the painting table post Salute has been a unit of Imperial Cuirassiers.  I like a variety of figures in my units; if I can get every figure to be different, then so much the better.  I like this more 'hotch-potch' look because TYW troops were supplied from different sources at different times and would seldom have a very uniform look.  Add on to this that men, and certainly horses, will rarely have been all doing exactly the same thing, and I think some variety looks good.   One of the ways I achieve this variety is by making up my units with figures from different manufacturers.   For example, perhaps manufacturer A makes three TYW cuirassier figures and manufacturer B also makes three.  By using both manufacturers I get 6 different figures.   Obviously a bit of care needs to be taken.  Different manufactures can make 28mm figures which do not always look right when standing next to one another.  Fortunately some do.

Here is my selection used for this particular unit, that I think fit nicely together.  The riders are from Warlord Games (link), Perry Miniatures (link) Avanpost Miniatures (link), Foundry (link) and Horcata (link).  The horses are from Perry Miniatures, Foundry and Front Rank (link).  Horcata don't make horses themselves but make their riders to fit on Front Rank horses.  This is interesting as Front Rank do a nice selection of stationary, or near stationary, horses.  I wanted to give this unit the look of cavalry in reserve, waiting for the order to attack, so standing horses are ideal.  Although I like some variety in the figures of a unit, I like them to look as if they are all following the same order.  So all of the rank and file here have one of their two wheel-lock pistols at the ready.

Next came painting.  I am definitely not an expert at this step and so will leave it to the very many gifted painters out there to provide painting tutorials.  There were two things that I did differently for this unit.  First was that I copied some brown triads (sets of three paints that work together as shade, base and highlight) from the Loki's Great Hall Site (link).  (Loki has some great Vallejo triads on his site.)  He also has some handy YouTube videos on horse painting (link).  We are always learning and so I'm always happy to look at new techniques and ideas.

The second new painting technique was trying to get blackened armour to come out as I wanted.  This is a key feature of the Imperial cuirassiers in this period.  I have struggled to get the effect to still look like metal armour, while also not looking too mid grey.  This time I gave the figures a relatively heavy dry brush with Natural Steel from Vallejo.  I then washed this in Nuln Oil from GW.  This gave me a very black finish, with just the hint that the surface was metal.  I like the result, so this will be my new method for this type of armour.

Here is the unit varnished and based.  I under Winsor and Newton Gloss varnish (for protection), followed by Daler Rowney Matt varnish to matt things down at the end of the process. Bases from Warbases (link).   The cornet (i.e. flag carried by cavalry units) is from Flags of War (link).  It is based on Ottavio Piccolomini's coat of arms.  Piccolomini is one of the larger than life characters of the TYW who, over the course of the war, rose from the rank of Captain to the the highest rank in the Imperial forces, that of Generalissimo.  At Lutzen he was the Colonel of a regiment of Arquebusiers.  They were supposedly so well equipped that they were better armoured then some of the titled cuirassier regiments.  Due to his stellar performance at the battle he was given many rewards by the Emperor, including his regiment being changed to a cuirassier unit.  I have therefore based my unit on this later full cuirassier version of Piccolomini's regiment.

The final step is basing.  I followed my normal formula of PVA, filler, sharp sand, and Humbrol Matt 29 Dark Earth, with a light dry brush of Cream/Beige.  Tufts and static grass added to taste.

Here are some further shots from different angles. 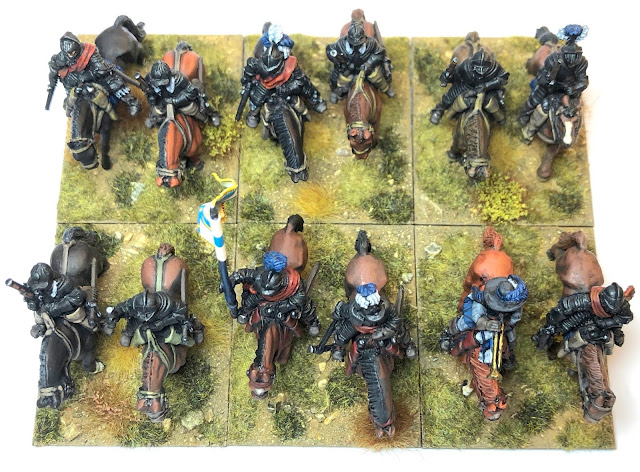 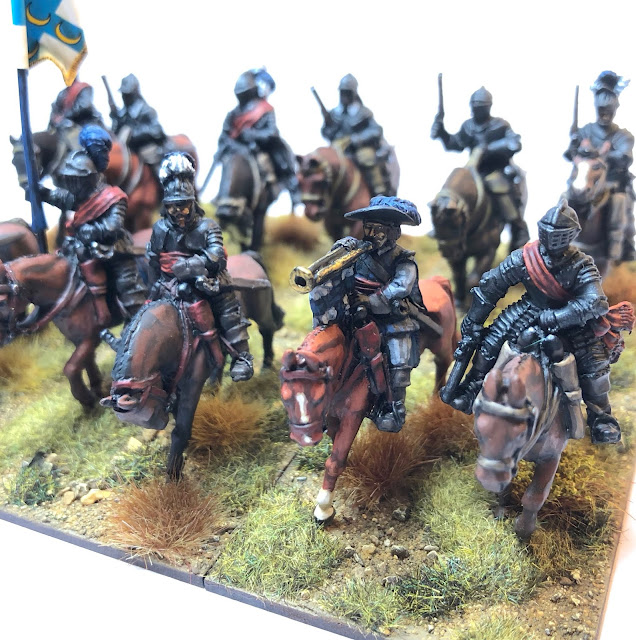 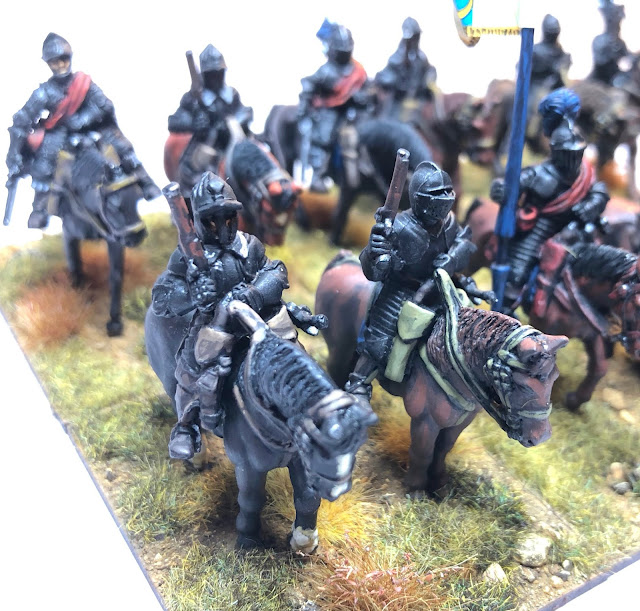 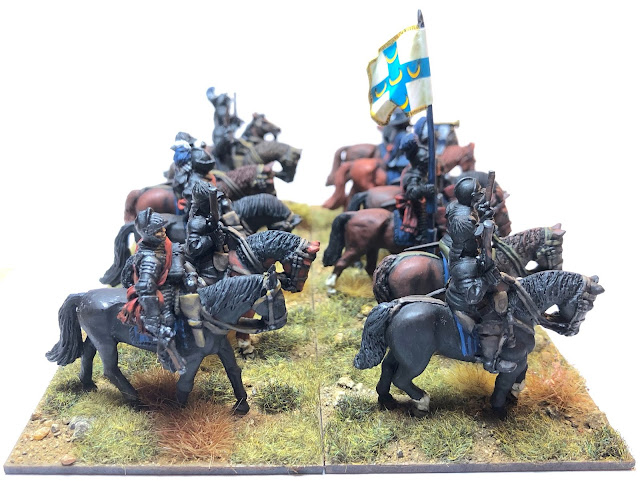 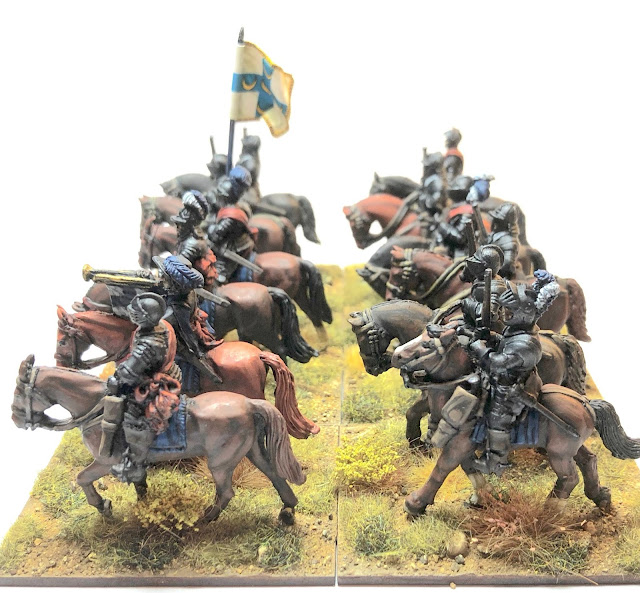 As Piccolomini's Cuirassiers ride off in to the sunset, I am about to start the next unit on the painting table; more cuirassiers, this time with swords rather than pistols.

The Road Goes Ever On

This blog post covers the future of The Via Regia blog.

(The post is sprinkled with wonderful pictures from Alan and Elaine Daniels.  They took these at Salute and have been kind enough to share them with us to use on the blog.  I really, really like Alan and Elaine's pictures.  They are quite different to your run of the mill wargames photos.  I have been lucky enough to discuss these with them by email, and I hope to try to learn their approach in the near future.  More of this later.)

Back in January we set up this blog to chart the build up to our Lutzen 1632 game at Salute.  We have well and truly done that, so I suppose it could be the end of the Via Regia, the end of the road?  However, as J. R. R. Tolkien himself penned, 'The Road Goes Ever On', and as this blogging lark has been so entertaining to write we have decided to keep it going.

What will be the new topic for the blog if Lutzen and Salute are 'done'?  Well, the plan is for the blog to be about the more general wargaming journey we are on.  In the immediate future this will be building more  Thirty Years Wars (TYW) units.  The game at Salute featured figures from three collections.  The way we split the up the units we needed for the game meant that, if we intended to do games on our own in the future, we would have some gaps in typical TYW troops.  I, for example have not got any Croats yet, and have only one Imperial Cuirassier unit. 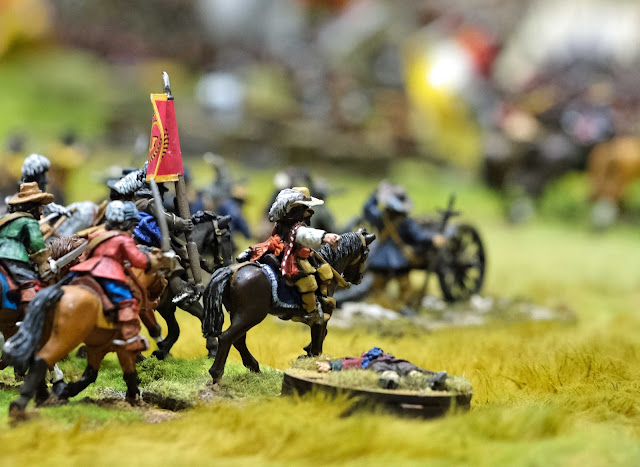 In the less immediate future we are all keen to investigate the battles further east during this period.  The Swedish-Polish wars look interesting.  We already have many Swedish units, and so we would mainly be collecting Poles.  Seventeenth century Poles?  What did they have?  Winged Hussars!  I have wanted to collect these since I first read about them in Gush, and then saw the spectacular factors they had in the WRG Renaissance rules.

It feels a bit like a mid-life crisis.  Some people get to that certain age and rush out, buy a leather jacket and motorcycle, and roar off in to the sunset.  Not me.  I think that I will keep my mid-life crisis to wargaming.  Who hasn't seen a fabulously painted unit of Winged hussars, bedecked with huge flags and lance pennants, and thought "phwoar!".  I will therefore be throwing all caution to the wind, strapping on my eagle feathered wings, lowering my striped lance, and charging full tilt in to future.  (I am already aware that the wings are a topic of some contention, but please don't spoil my dream this early!) 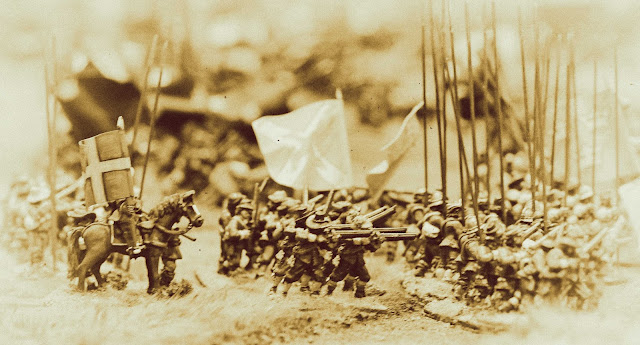 Once you start researching the Poles you then come across their other enemies, Cossacks and Turks.  Oh, dear.  I think I may have just mapped out the next 5 years!   It is just at this point that Barry Hilton at Warfare Miniatures releases his Turks and Cossacks.  https://www.leagueofaugsburg.com/shop/products-subcat-57.html
Well, one is only mortal flesh.  I think there is a certain amount fo inevitability about it all.  But, important to not get ahead of myself.  Expect things to stay firmly in the German states for the next few months.

It would be great to hear suggestions for the future plans from any readers .  Any recommended books on the Poles and the wars with Sweden in the 1620s would be gratefully received.