After several months focusing on my new 1620s Polish army, this blog post shows a new unit of the Pole’s adversaries in my Swedish army; Åke Tott’s cuirassiers.

I was inspired to create this unit after seeing the new cuirassier figures from Avanpost Miniatures (available from Mezzer’s Minis in the UK link).  I’ve written before about the superb detail on the Avanpost figures and these cuirassiers are no exception.

Cuirassiers were the supreme shock troops in many armies in this period. Encased in three-quarter armour, riding large horses, and armed with swords and pistols, they were fearsome opponents on the battlefield. As the Swedish king, Gustav Adolph, built up his army in the 1620s he decided he needed more of these heavy cavalry in his forces, particularly when he had to face the dreaded Polish Hussars.  By the battle of Dirschau in 1627 there were several companies of  cuirassiers in the Swedish army, although how complete their armour was is not clear.  It is not uncommon in this period for a unit of cavalry to be raised as cuirassiers, but for them to be missing parts of the armour expected for cuirassiers. This may be because the armour wasn’t available, or because the troops ‘lost’ those elements that were uncomfortable to wear over a campaign.

I’ve chosen to represent this unit with a fair proportion of figures in the classic cuirassier three-quarter armour, but one or two figures, relegated the the rear rank, are less armoured perhaps representing newer recruits. 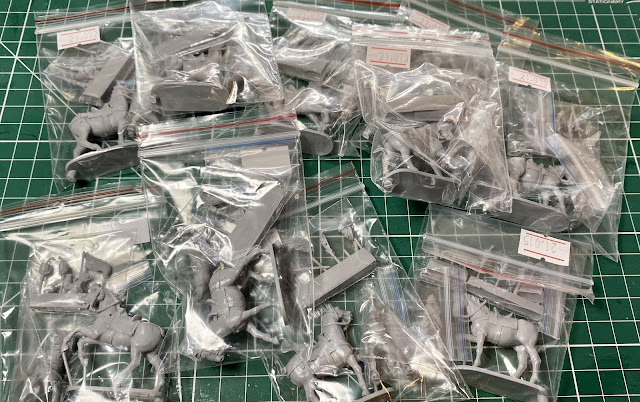 The Avanpost figures are bought individually and each comes in a small zip lock bag. Most require some assembly; typically arms and scabbards. You can see in the picture the typical contents for a bag. 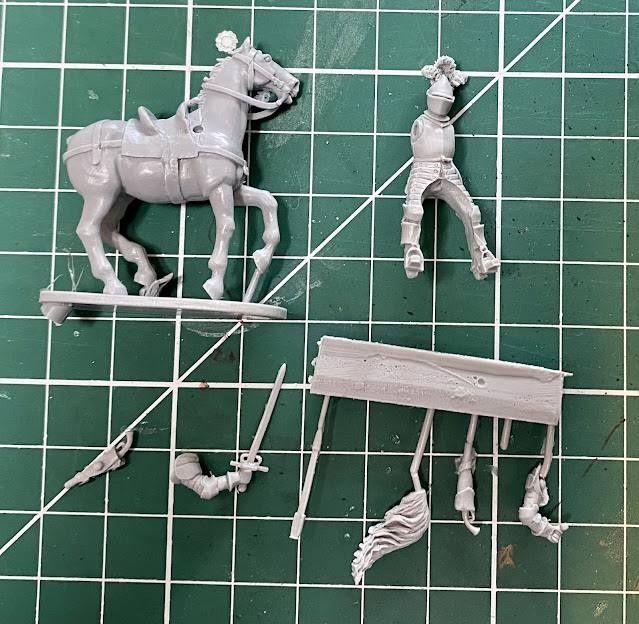 I would recommend giving the resin figures a wash in warm soapy water to get rid any residue from the production process. I used a large, child’s paint brush to make sure I could get in to all of the nooks and crannies as well as being gentle with with the thin resin pieces. You need to be gentle with the swords and scabbards in particular. 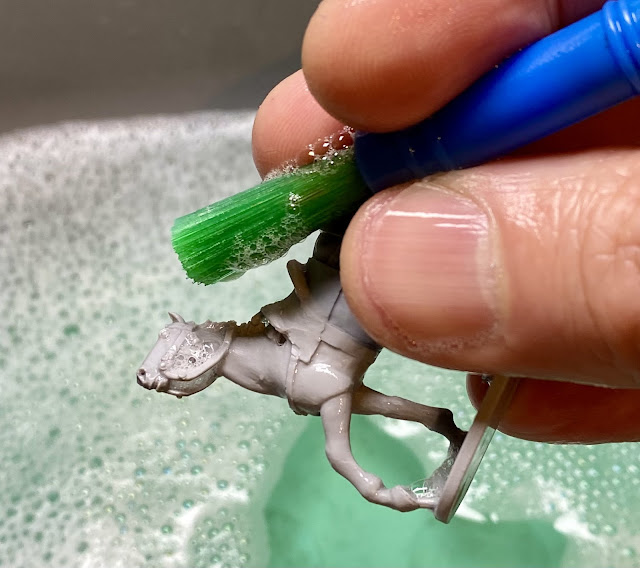 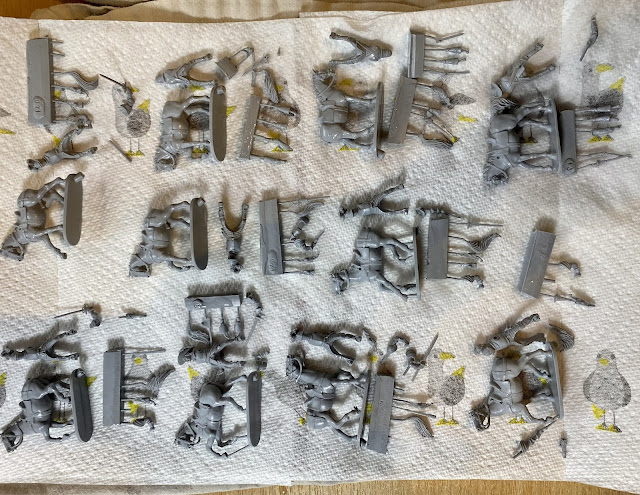 Once washed, and dried on paper towels, the figures are very easy to assemble using small amounts of super-glue.  There are not many options for varying pose without resorting to scalpel and putty, but as there is a good selection of different figures available, this isn’t a problem.  Here are a few of the figures made up. 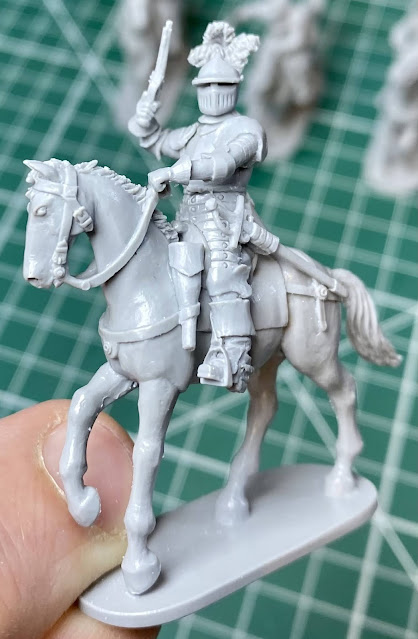 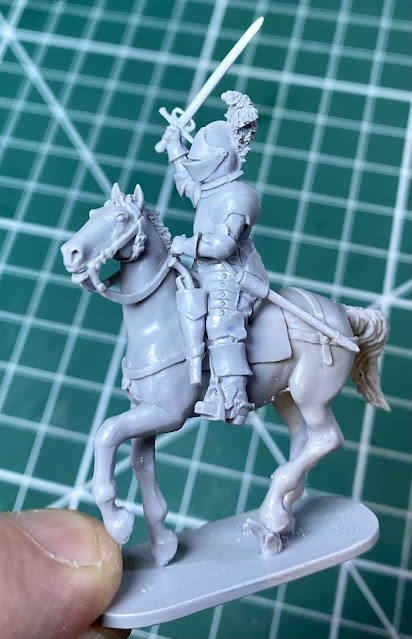 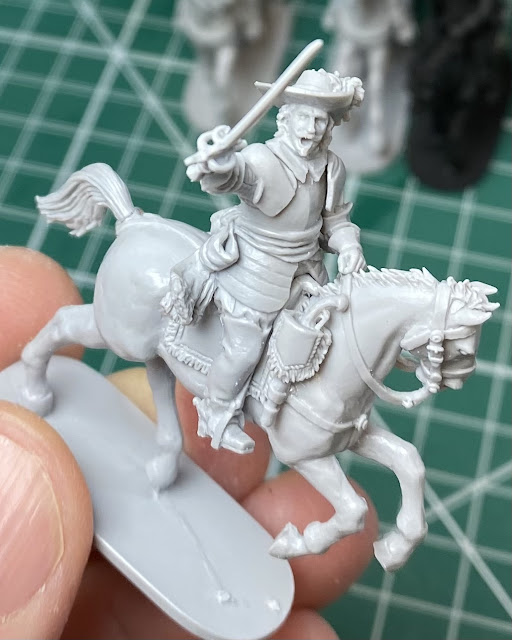 Avanpost don’t currently offer a trumpeter figure so I added an arm from the Warlord plastic Pike and Shotte cavalry sprue that is holding a trumpet, with a smidge of green stuff to match the figure. 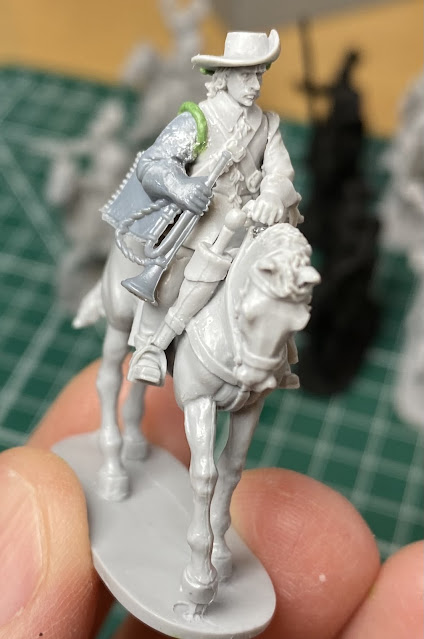 As the weather was wet I couldn’t spray prime the figures outside, as I normally would, and so I primed the figures by brush.  I typically use Humbrol Enamel paint for brush priming as it gives a really good base to paint on top of.  In an attempt to have an easier to use product (i.e. you don’t need to clean the brushes in white spirit!) I have been using this product from AK Interactive and it works really well - very matt and good adhesion to the figure; metal, plastic and metal. 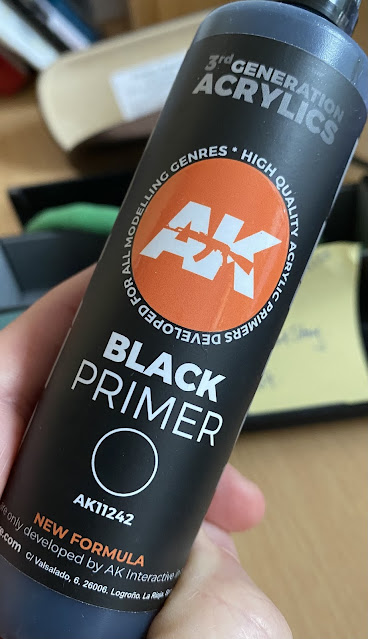 After painting a few brightly coloured units I decided to paint this unit as a complete contrast.  Swedish (and German) troops’ armour was typically blackened in this period, to protect the metal.  I therefore kept everything else on the figure also in very dark tones.  I think this gives the unit an ominous look.  For a cavalry standard I chose to use one that is attributed to Ake Tott’s regiment. 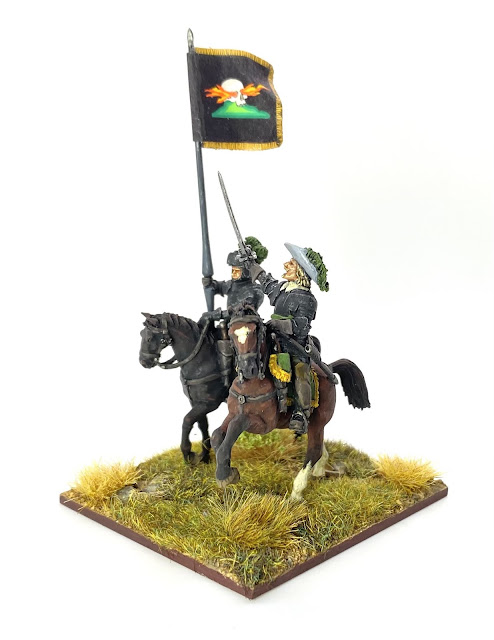 As his name could be interpreted as ‘death’ in German, Ake Tott played on this theme with his regiment’s standards, using a black field and a skull motif.  Who doesn’t want a flag with flames bursting from a skull’s eye sockets?!  The flag is from Flags of War.

Here is the completed unit: 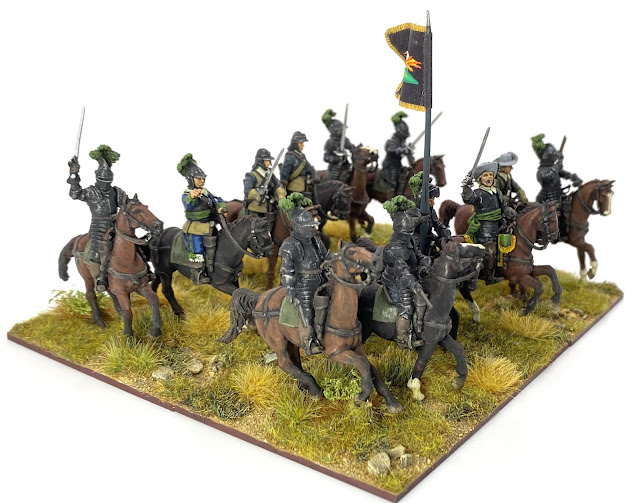 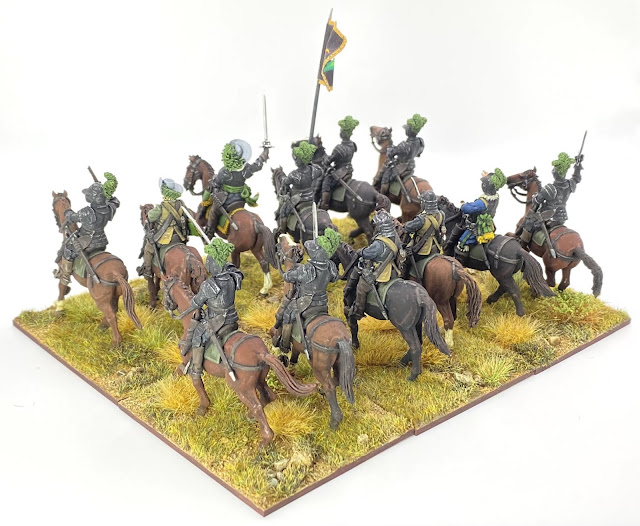 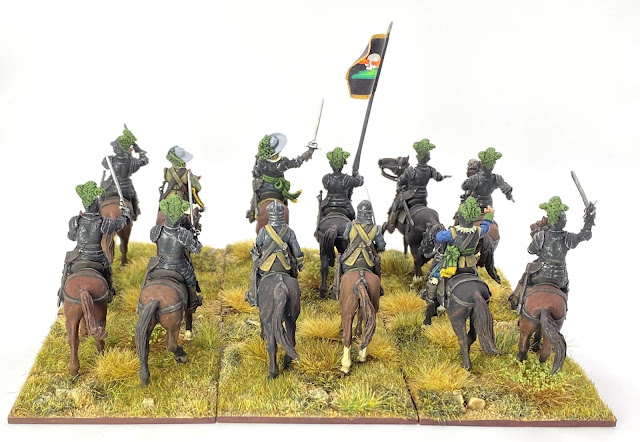 These Avanpost figures were an absolute joy to paint; such crisp detail and beautifully sculpted figures. I’m not sure that I would mix the horse figures with other manufacturers in the same unit, but I have used the riders in the same unit with Warlord, Perry and TAG.  I enjoyed this unit so much that I have ordered another unit’s worth from Mezzer’s Minis.

I plan to make some more conversions on this second unit, but I think the Swedes will soon have another cuirassier unit!