This post looks at the latest unit on my painting table, a unit of Cuirassiers for my Swedish army of the 1620s.

This is the second unit that I’ve created using Avanpost’s 28mm resin figures (see the previous one here: https://theviaregia.blogspot.com/2021/06/ake-totts-cuirassiers.html).  I’m not very confident about the longevity of these rather fragile figures but they are lovely to paint! 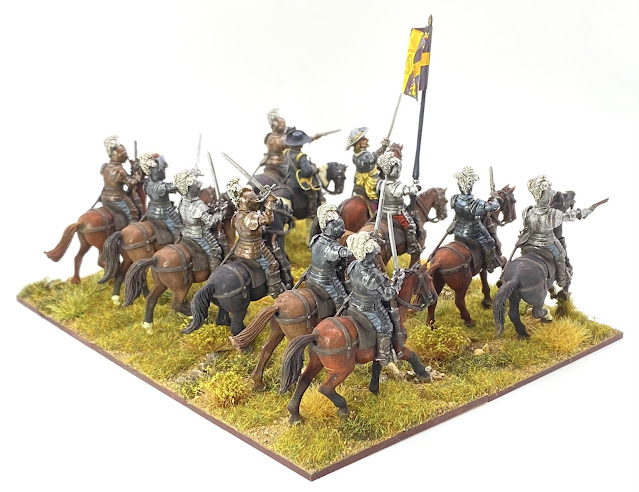 After seeing someone else’s unit with different finishes of 17th century cuirassier armour (hello to Paul Mackay on Facebook!) I decided that I would have a go at a mixture of armour finishes.  I have also always liked the Angus McBride illustration in the Osprey Elites title on English Civil War Cavalry that shows Haselrigge’s lobsters with three types of armour finishes. Untreated metallic armour would have rusted very quickly and so metal armour typically had some form of protective patina added.

Blackened armour was probably the most common (and cheapest) finish and this could be achieved by coating the heated armour with linseed oil and soot. To achieve something like this on my miniatures I used a base coat of equal parts of GW Leadbelcher, VMC Blue Gunmetal and GW Contrast Black Templar. Over this a dry brush of GW Ironhands Steel, and then a final wash of thinned GW Nuln Oil.  By adding more of the Blue Gunmetal in the base then a bluer finish can be achieved which was a considered a more desirable, and expensive, finish in the 17th century.

Russeting was another patina finish which gave a reddy-brown finish, and was most popular in the 16th century.  One 17th century recipe I’ve seen for this suggested oil and vinegar. To represent this I used a base of Leadbelcher with a ‘wash’ of GW Contrast Fyreslayer Flesh. Finally a light dry brush of Ironhands Steel.

It is also possible that some individuals may have kept their armour ‘white’ (plain metal, uncoloured) if they had the available man power to constantly polish and clean it. For this I used a base coat of Leadbelcher, a dry brush of Ironhands Steel, and a wash of Nuln Oil.  For a really fancy finish (for the Cornet) I painted on some VMA Silver as a highlight. 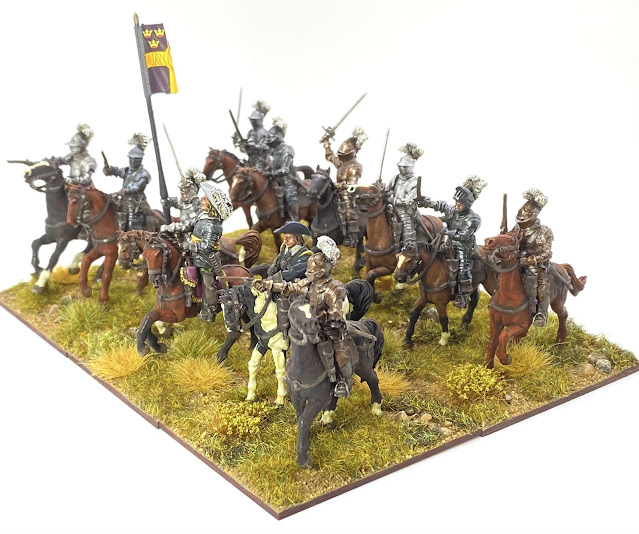 I like the final look of the cuirassier unit in their fancy armour, and it was fun to play armour with the armour recipes.

As with most of my recent units I added a casualty tracker base for the unit.  This uses one of the lovely Bloody Miniatures ‘Dismounted Cuirassiers’ next to a Avanpost wounded horse.  The base is from Charlie Foxtrot. 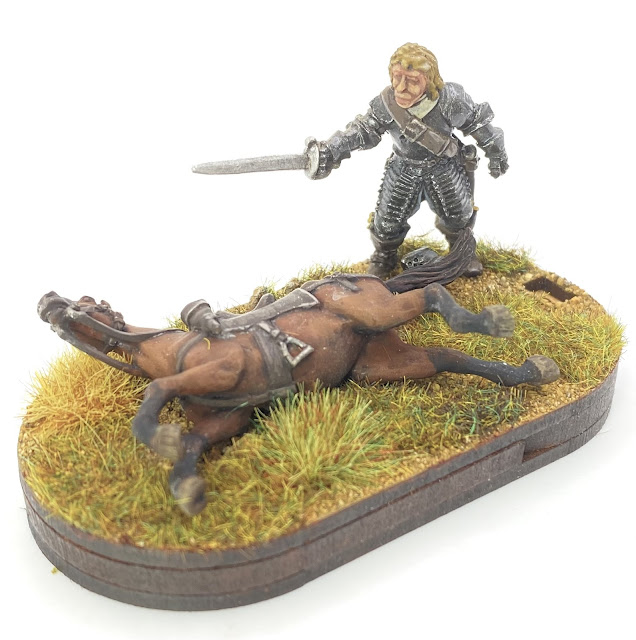 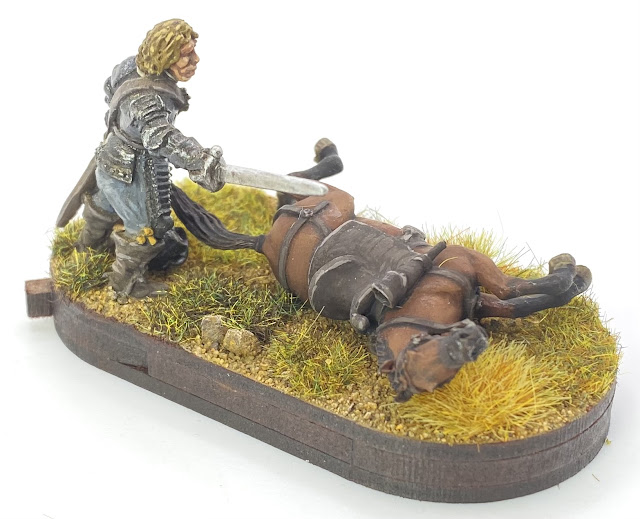 Next time, back to the infantry.

“And it was all yellow”

This post looks at the latest unit for my 1620s/30s Swedish ‘Yellow’ Regiment.

The latest unit is another ‘sleeve’ of shot for the expanding Swedish Squadron. All 28mm figures from The Assault Group (TAG). I made one head swap, on the sergeant. The original figure was wearing a Montero, but I preferred to have him in a helmet and so made a swap with a spare TAG figure.

I’m definitely getting the hang of these now, and quite enjoying the uniformity.

Here are the three completed units together;  the pike unit with two sleeves of shot, and also a command base I completed for the Yellow Regiment sometime ago (all Warlord figures, see here for more details https://theviaregia.blogspot.com/2019/05/generalmajor-count-nils-brahe.html).
Next on the painting table, a respite from the yellow, and some ‘heavy metal’ horse for the Swedes.
Until next time!
Andy @ The Friends of General Haig.