Husaria - the Polish Hussars of the 17th Century (part 1)

This blog post describes the start of my 1620s Polish and Lithuanian Commonwealth army with the famous Polish ‘Winged’ Hussars. This post will cover: little bit of historical background, my purchase of some figures, and the preparation of the figures for painting.

“First advanced the hussar squadron of the marshal himself, well armoured, and so imposing that any king might be proud of such troops. Only nobles of the mountains served in this squadron, chosen men of equal size; their armor was of bright squares inlaid with bronze, gorgets with the image of the Most Holy Lady of Chenstohova, round helmets with steel rims, crests on the top, and at the side wings of eagles and vultures, on their shoulders tiger and leopard skins, but on the officers wolf skins, according to custom.” From ‘The Deluge’ by Henryk Seinkiewicz

Polish ‘Winged’ Hussars must be the most stunning of troop types for Renaissance wargamers.  Armoured and lance armed, elite cavalry, they formed the core of Polish and Lithuanian Commonwealth armies for over two centuries.  With brightly coloured and flowing lance pennants, and with their iconic eagle feathered ‘wings’, these were the poster pin-up cavalry for me as a teenager.  When I started wargaming, in the 1970s and 80s, renaissance wargame rules used Winged Hussars on their covers, and even Games Workshop payed homage to them with their Warhammer Kislev Winged Lancers.
Raising my own miniature units of Polish Hussars has been a wargaming ‘itch’ that has taken a long time for me to scratch. When I recently started my 28mm Thirty Years War (TYW) forces to refight Lutzen (1632) I was just thinking of the conflicts that played out in Western Europe.  However, researching Gustav Adolph’s Swedish army kept prompting me that he had ‘cut his teeth’ fighting the Poles before he came to Germany in 1630.  With Lutzen ‘refought’ I immediately started forming plans for a Polish army, including the glorious Hussars, that I could use as new enemies for my Swedish forces.
The Polish Hussars were originally light cavalry, evolving in the 16th century from similarly equipped light horsemen in Hungary. As time went by their equipment got heavier and they replaced the heavily armoured Polish ‘knights’ as the main strike force of Polish armies.  The Hussars became the most important component of Polish armies, and the preeminent cavalry of Eastern Europe.  The Hussars’ equipment and horses were expensive, and their ranks were filled with Polish and Lithuanian nobles, and their retainers.

“Of these horsmen, some are called Hussari, who are armed with long speares, a shield, a Carbine or short gunn, and two short swords, one by the horsmans syde, the other fastned vnder the left syde of his sadle.” Fynes Moryson describes the Polish cavalry in the 1590s.

There is a lot of superficial information available, especially on the internet, covering the Polish Hussars, which is great to get an overview and some historical eye-candy.  If you want to delve a bit deeper then luckily Osprey have an excellent volume, in their Warrior series, that covers them in some detail (https://ospreypublishing.com/polish-winged-hussar-1576-1775-pb).  There is also an even more detailed treatise available in Polish, ‘Husaria’ by Radoslaw Sikora, often available on Amazon (https://www.amazon.co.uk/dp/8324054685/ref=cm_sw_em_r_mt_dp_YI63FbDD4S0BQ).  These are both lovely books, and worth reading even if you only have a passing interest in the subject.
When collecting an army I like to base it on a particular historical campaign, and may be also a particular battle.  This helps me define some parameters for the force, and gives me some focus to my research. As I wanted to use my TYW Swedish army as the opponent for the Poles, I decided on the campaign in Prussia in the late 1620s.  Between 1626 and 1629 Gustav Adolph, and his Swedish army, invaded the Polish territory of Prussia in an attempt to take control of Gdansk.  The battle in this campaign that tempted me most was Tczew (or Dirschau in German) in 1627, where there are large clashes of Polish and Swedish cavalry.  (I have a blog page with some ideas for those wanting to research 17th century Polish armies here link.)
Helion have just published a book specifically on the Polish army for this campaign against the Swedes.  It is called Despite Destruction, Misery and Privations and is written by Michał Paradowski.   I am sure this will become the standard work on this period for the Poles (https://www.helion.co.uk/military-history-books/despite-destruction-misery-and-privations-the-polish-army-in-prussia-during-the-war-against-sweden-1626-1629.php).
While searching for a particular campaign and battle, I had already (perhaps impetuously!) ordered some figures.  I started with figures from Warlord (link), The Assault Group (link) and Foundry (link).  All of these are metals.  I already have lots of figures from their 17th century ranges in my TYW armies, and so I was hopeful that their Polish ranges would also mix together ok.
From reading the books above, my idea of what would look right for 1620s hussar units began to form:
The Warlord Hussars (link) are in very dynamic poses.  There are available in boxes of eight figures, or packs of three random models.  The horses and riders are quite distinctive, and I don’t think they will mix in the same unit with the other ranges.  Their equipment makes them look better suited to the later 17th century, such as for the famous 1683 defence of Vienna against the Ottoman Turks. The shapes of the wings (bending forward) are also perhaps better suited to the late 17th century. (The wings would be fairly easy to prune back to a shape more suitable for the earlier 17th century.)
The Assault Group (link) are very nice models and have three different packs, each of three figures,  available; command, levelled lance and upright lance.  The armour and equipment looks fine for the 1620s (lots of chainmail for the arms etc.) and the wings are also perfect for the early 17th century.  The packs I received seemed to have been a bit mean with them wings, but TAG do sell the wings in separate packs if you need more. The lances seem a bit short, and I’m not keen on this bendy metal type.
The Foundry (link) models are certainly the oldest sculpts of the three companies, as they look like the work of the fabulous Perry twins from when they sculpted Foundry figures. There are three Hussar packs, each of three figures; command, upright lance and levelled lance, and also a ‘general’ command pack of three figures.  The figures look fine for the 1620s with plenty of chainmail in evidence.  The wings are of the bent forward type and so I will be pruning these back to match the TAG wings.  You do get plenty of wings though.  The lances are, like  TAG, of the bendy metal variety and so I will replace these. Being quite old sculpts these are perhaps large  25mm rather than small 28mm.
The TAG and Foundry Hussars fitted this 1620s feel perfectly. The TAG and Foundry riders can also be mixed in the same units.  Their horses however don’t mix in the same unit so well, in my view.  On this basis I have decided to form my Hussars units in three ways:
With the research and planning done I got to work on the ‘filing and chipping’ of the metal figures.  I also needed to carry out some minor conversion to the figures to have the wings saddled mounted, rather then mounted on the riders’ backs.  Some green stuff modelling putty was used to make any repairs required to cloaks and animal skins.
I have typically glued horse and rider together at this point, after cleanup.  I decided to paint the Hussars separately from their horses, and glue together after painting.  I primed / undercoated the figures with Halfords (a cheap UK car and bike parts supplier) black spray primer. I then realised that I didn’t have a method to hold the horseless riders for painting.  I came up with a perhaps slightly over-fiddly method.  I drilled a small hole with a pin vice in the groin of each rider (ouch!). I then put some 0.5mm metal rod in to some corks I had lying around, and then PVA glued the riders on to the rods. These were a bit wobbly and unsteady. I therefore glued UK 2 pence pieces under the corks and found some magnetic sheeting strips (UK 2p are magnetic) to put on my painting tray.  This works ok so far - but seems a right faff!  I had to number the riders and horses so that I could remember which rider was fitted to sit on which horse (they were not interchangeable after the chipping and conversion stage). 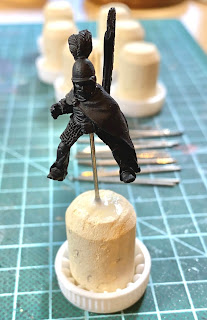 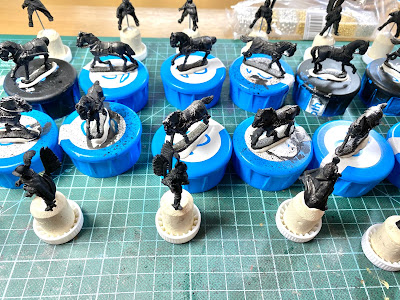 I also decided to leave the lances separate to the figures during painting.  This would make handling the figures easier, as the lances are a really long 80mm, and it also make it easier to attach the pennons while the lances are separate.  The Foundry and TAG figures come with white metal lances.  As mentioned above, I’m not a fan of these as they are very easy to bend during games, and then very difficult to great straight again. Warlord use brass rods with shaped points for their lances and so I copied this for the figures from TAG and Foundry. (Warlord also sell these brass lances separately as “Metal Pikes” - see link.) Warlord have some really nice white metal, shaped ‘balls’ to place on the lances as the hand guards in their box set.  For the other manufacturers’ figures I used some tiny beads I found at home. I primed the lances, all stuck in to a piece of cardboard, at the same time as the figures.
As well as building Hussars to form the units in my Polish army, I also had a crack at making a figure from my wargaming history.  Anyone familiar with the Wargames Research Group (WRG) Renaissance wargames rules will recognise the illustration below on the left. This picture graced the front cover of the second version of the WRG army list book that came out in 1984 (no fancy full colour covers back in the 80s!).  I spent many, many hours perusing the lists in this book, and have a always liked this picture. I made the figure on the right by making a slight change to a Foundry Polish commander.  I added the horse crest (an off cut from an altered Hussar wing), changed the position of the horse wing, and cut down the wing. 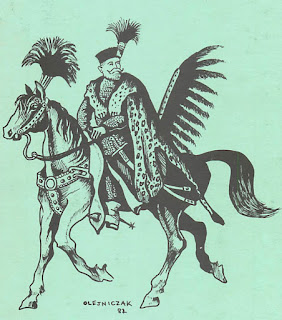 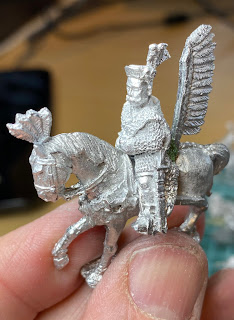 The back cover of the WRG army lists described the front cover illustration as follows:

I am sure that this figure will make a fine addition to a Polish command stand.
In the next part of this series I will cover the painting of my first unit of Hussars.
Until next time!
Andy @ FoGH