This blog post is just a quick update on my 1620s Polish-Lithuanian Commonwealth army in 28mm.

Slow progress over the last few weeks, but I have completed another unit of Haiduks, and I’ve also built a MDF cottage (from 4Ground) for use in my Polish v. Swedes games set in Prussia.

This is my third unit of Haiduks, and I have returned to the ‘classic blue plus red lining’ colour scheme for this unit.  (You can see some more details on Polish Haiduks in my first post on them here:  https://theviaregia.blogspot.com/2021/11/polish-haiduks.html .). The figures remain a mixture of The Assault Group (TAG) and Foundry.  This units uses marching poses from both manufacturers. 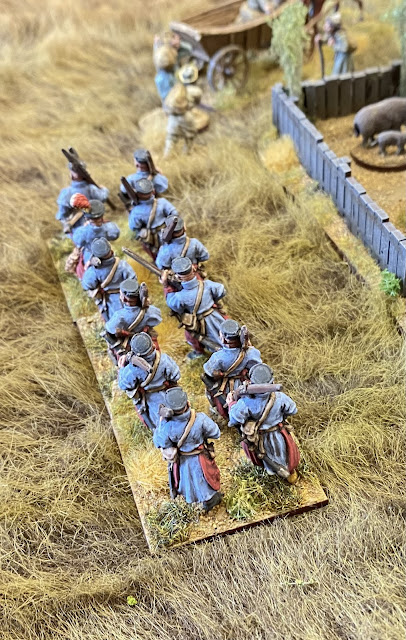 When I was thinking of taking a few pictures of this latest unit of Haiduks I thought that it would be nice to have a rural looking house.  I have had this 4Ground MDF building in my stash for some time, and while intended for WW2 Eastern Front games, I thought it would also suit me for the 17th century.

It is a very detailed kit as you’d expect from (the now sadly defunct) 4Ground, and was easy to build despite the detail.  One of the things that drew me to this model was the teddy-bear fur thatched roof, with the fur provided.  Once the material was stuck on to the roof, I brushed in a lot of PVA to the fur, and then painted it.  This was pretty straightforward and drying times much improved by the UK’s recent heatwave.

I have left the cottage pretty much as it comes out of the box for the remainder of the kit, just splashing about some weathering. I built a base for the building using a Warbases 3mm scenery base, and the fencing was also supplied by 4Ground (from Things From The Basement).

Next up on the painting tray are more Swedish cavalry.