We march for plunder!

"God save us from famine, plague and the Croats!"
German prayer during the Thirty Years War

This blog post describes the latest unit for my Thirty Years War collection, based on the armies at Lutzen, 1632; the Croats.

Surely the most colourful troops that fought during the Thirty Years War were the Imperial Croat cavalry.  These light horse men were recruited from the Imperial lands that bordered on the Ottoman Turkish empire. Originally made up of Croatians, as time went on their ranks were filled from many ethnic groups from the South East of the Empire, such as Hungarians, Wallachians, and even Cossacks.  All experienced in the frequent minor border clashes with the Turks.  What ever their origin, they became collectively know as the Croat horsemen, and became feared wherever the Imperial armies campaigned.

On the battlefield they were perhaps no match for heavier horse in a straight fight, but in scouting, plundering, and the general 'beating up of quarters' there were none better.  They had a fearsome reputation for plundering and were feared by the civilian population on both sides.  The Croats became the 'bogey men' of which parents warned their children, and contemporary pamphleteers horrified their readers 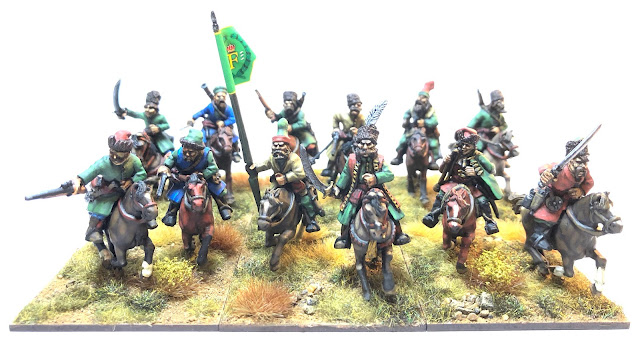 The Croats were classic light cavalry.  Unarmoured, and riding hardy but nimble ponies, they would skirmish with their carbines and pistols, before closing with their sabres when they had found an advantage, or sufficiently weakened an enemy.  They were famed for their canny ability to lay or avoid ambushes, after many years learning from the wily Turks and their Tartar allies.   Even rivers were no obstacle, as they were able to cross bodies of water thanks to their strong swimming mounts. 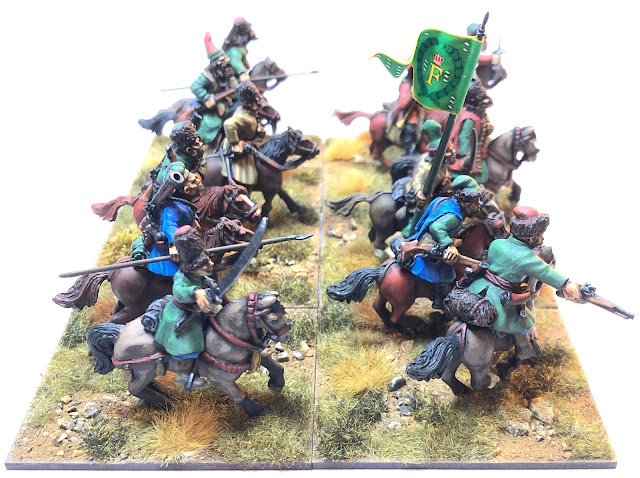 I have been looking forward to collecting and painting the Croats since I started this period.  They are something quite exotic compared to the more regular pistol armed horsemen of Central and Northern Europe.  Warlord Games make Croats for the Thirty Years War (here), and The Assault Group (TAG)  also have Croats (here) as well as covering Poles, Cossacks and Tartars that can be used for Croats.  Wargames Foundry have a set of Cossacks (here) in their Severn Years War range, including mounted Cossacks that I think also can work as Croats. They are riding really characterful ponies, and have a great range of poses. 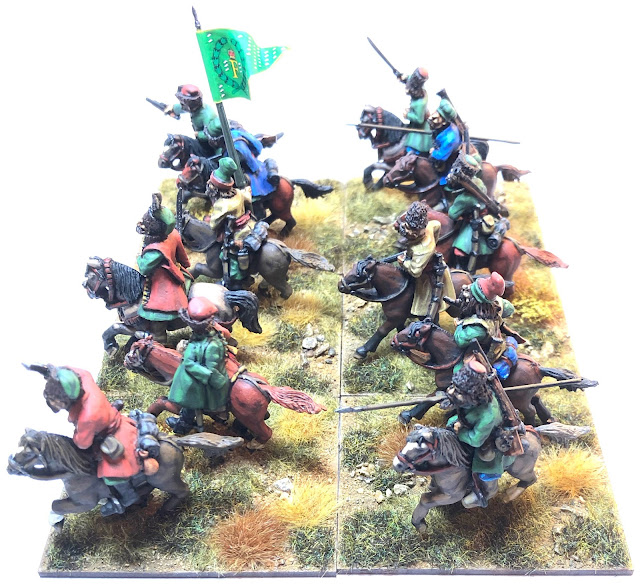 This unit is made up of the Wargames Foundry figures, with the addition of a TAG Croat trumpeter.  They carry a banner of a shape peculiar to the Croats, made by Flags of War (here).  The figures reflect the typical clothing and equipment of the Croats; brighter shades of red, blue and green, the long eastern style of coat, sometimes worn as a cloak, often braided, knee boots, fur trimmed hats, curved sabres, pistols and carbines.  I think they look like a fearsome bunch, and my Swedish baggage train had better look out! 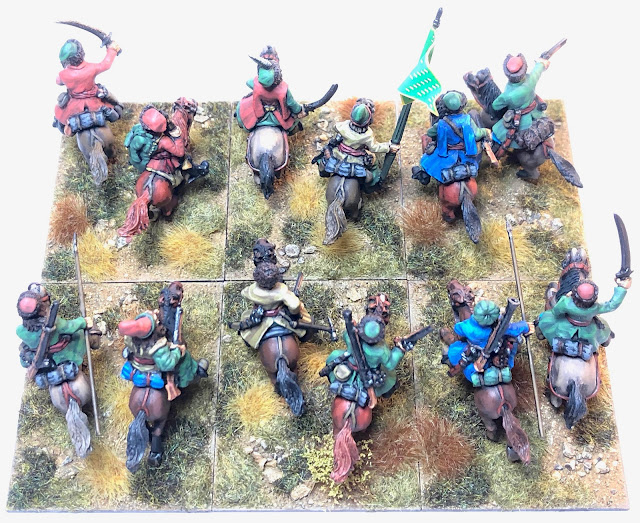 All of these figures were a real joy to paint.  This range from Foundry have real character, with each pack and figure named.  It was easy to imagine a story building around the unit and its piratical members as I painted the figures.  I can't wait to get them on to the battlefield so that they can start bringing some of those stories to life.