“Victory is the beautiful bright-coloured flower.  Transport is the stem without which it could never have blossomed.”  Winston S. Churchill

In this blog post I discuss the latest figures that I have completed.  Perhaps not the most glamorous of units, but I think a great addition to any 17th century wargames table; artillery limbers.

These limbers, with their teams of horses and drivers, having been sitting in the paining queue for a very long time.  They have always taken sending priority to the flashy horse and foot units.  With no desperate gaming deadlines looming I have finally got around to giving them the attention they deserve.

Limbers are something that I think many of us justifiably ignore for the Pike and Shot period.  Bigger guns tended to be set in fixed positions before the start of a battle, and stayed there for the duration.  They might be assaulted and change hands, even changing hands multiple times, but they were not typically moved from place to place during a battle.  The light guns, such as the 3 and 4 pounders, were sometimes moved with the infantry formations, but this was usually a case of man handling them. 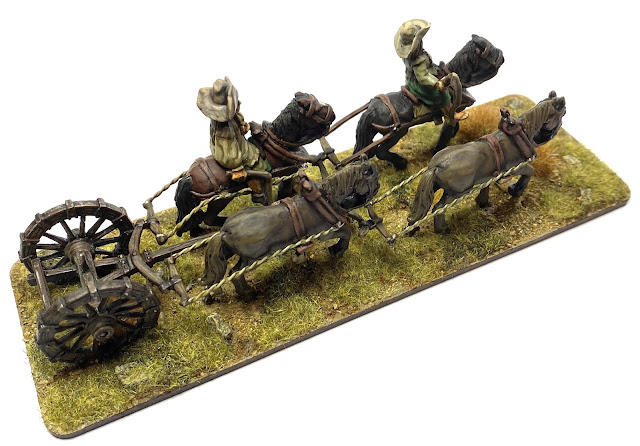 So, what is the point of investing in limbers?  Well, there were a few reasons for me.  Probably the first reason is that they make nice dioramas for the artillery position which I think is sometimes at risk of looking a bit bare.  There was a huge amount of paraphernalia involved in running 17th century artillery batteries, and a few limbers help it look a bit busier, along with other carts, equipment, train guards, etc.

Secondly there are a few battles where one army still needed to pull their heavy guns in to position at the start of the battle. Lützen 1632 is a great example of this.  Wallenstein had set up a position for his army, and Gustav Adolf had to manoeuvre his army to meet it.  As part of this, the Swedish heavy 24 pounders were towed on to the battle field and set up just as battle was starting.  If you want to game deployment activity like this then it looks a lot better to have some proper tows for your guns.

Finally, it gives you some great options for smaller actions.  Now, as well as the baggage carts and pack mules being involved in an ambush, I can add a limbered gun or two.  Perhaps a tasty prize for the ambushers, or perhaps a nasty surprise if the gunners are on top of their game and can get the gun in to action in double quick time.

There are two different manufacturers limbers in this set-up.  I have two three horse limbers which are relatively new out from Warlord Games (link), and a four horse limber from Wargames Foundry (link).


The Foundry limber is in actual fact a bit of a Frankenstein’s monster.  If I look back at my black and white Foundry English Civil War catalogue from the early 90s with its hand drawn figure illustrations by the famous Twins (a now treasured possession!)   I can see that originally there was a three horse limber with a rider and a figure on foot.  What Foundry sell now is a four horse limber, with two riders, and the limber it self looks like it has a separate origin.  The traces etc. included also need a bit of imaginative modelling to work out what to use and what to put where. 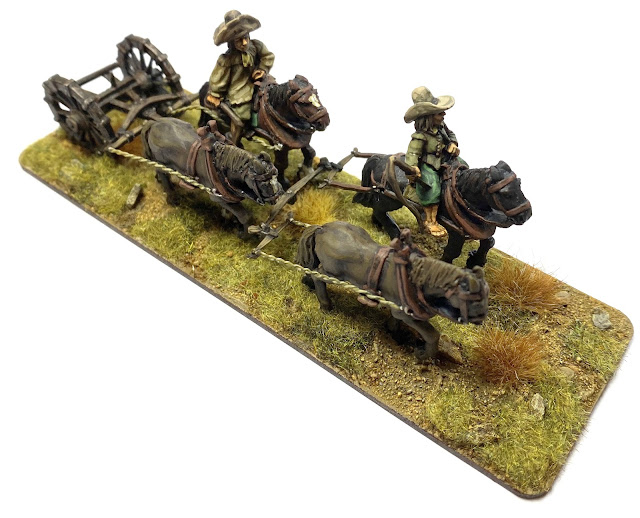 I spent some time studying Wagner’s Weapons and Warfare, with its lovely examples of cart and limber team hitching, to work out possible ways to hitch up this particular limber.  In the end I had to make some of the traces myself and I used some wound fuse wire for this job.  The eagle eyed will see the two front horses are hitched with slightly different traces, but I think this works as I’m sure there was a lot of ‘make do and mend’ in a typical artillery train.


The Warlord limbers were more straight forward to work out.  They have a nicely completed example on their website which I used as a guide, and they seem to have used one of the Wagner illustrations as a pattern for their set-up which is also very nice to see.  I couldn’t resist a head swap for the one of the Warlord riders using a spare head from the bits box.  (I find it very difficult to accept duplicate figures in units!) 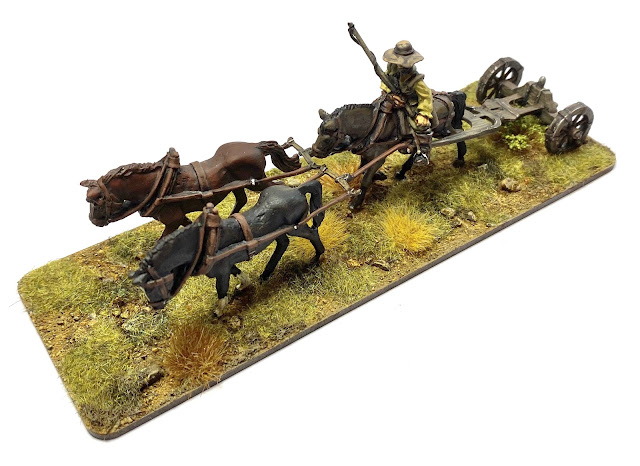 For all of the limbers I dry fitted everything together but, although I glued the riders to the horses, and the wheels to the limbers, I left everything else separate for painting.

After my earlier experiments with white undercoats and GW Contrast paint it was very nice to be back with black undercoat and my regular Vallejos.  I did use  a technique, new to me, copied from Matt at Glenbrook Games (link).  After their black undercoat was dry and set, I gave the horse and riders a heavy dry brush of Vallejo Flat Brown.  Just as Matt promised, this highlighted the details and also provided a first coat for a lot of the dingy brown accoutrements so common on 17th century figures.

With everything painted and varnished it them came to the part I was probably looking forward to least.  Glueing the things together.  Although I grew up with Airfix kits, I am not a great modeller.  I found this process very fiddly.  Much supergluing of tiny metal parts to fingers, followed by bad language, ensued.  Eventually I got the blasted things together and then had to work out the basing. 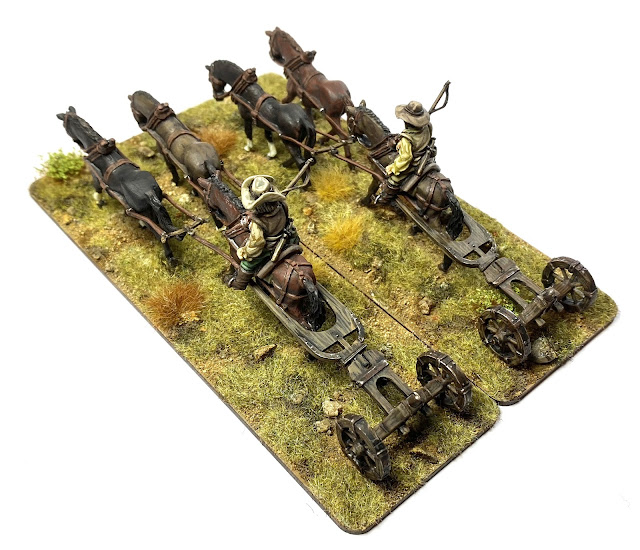 At first I was intent on making the bases long enough so I could add a towed artillery piece behind the limber and it would sit on the same base.  Much discussion with long term gaming buddies followed.  If the limbers are going to spend most of their time ‘unhitched’ then the portion of empty base could look a bit ‘weird’ was the group-think decision.  However, when being towed it also looked odd to me if the artillery piece was not on a base.  I went for a good old compromise.  A separate small base that could be added when a gun was being towed, and taken away when the gun is unlimbered.  I’m sure this will seems like madness to many, but I like the look of it, and it works for different situations.

It wasn’t until I had the nearly finished painting that I realised I had nothing of a suitable base size in my Warbases ‘collection’ (a RUB 4L box brimming with mdf goodness).  I made a guess-timate of a length that would work for all three limbers at 150mm, and went for 50mm width which matches by cavalry bases and would therefore work for my roads etc.  Most of my baggage type things are on round or oval bases to differentiate them from the fighting units.  I thought these round cornered bases offered by Warbases (link) were a good look for the limbers.  (They were kind enough to make a special order for me as 150x50mm is not one of their standard sizes.)  The additional bits are 80x50mm. 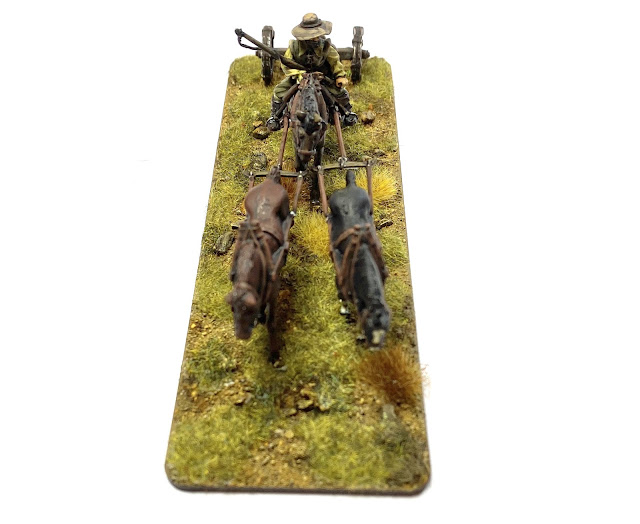 There you have it.  A long term wargaming itch finally scratched, and I have some nice limbers for my artillery train.  Now I want some limbers pulled by oxen for a different look - there is always something else!  :-)