Stakes, and all of the trimmings

In this blog entry I liven up some bases of stakes, or Swinefeathers, that I made in my last post with some simple vignettes to add to my 17th century Swedish army.

In the previous blog post (link) I described how I used the Warlord Games’ Swinefeathers to create bases of temporary defences for my Swedish musketeers. These looked fine but were perhaps just a little bit bland.  Over recent months I’ve been inspired by seeing some great vignettes on different social media and so I’d thought I’d have a go at something similar for my Swinefeather bases.

(For the record, some of my favourite vignette creators are:

I started by thinking about what sort of vignettes would make sense on a base of Swinefeathers. These vignettes would be used in games like the other Swinefeather bases and so they needed to fit on the same 60 mm x 40 mm bases. I came up with broadly two categories. The first was to show musketeers in the process of a deploying the swine feathers, and the second was to show the Swinefeathers after being damaged during the battle.

I searched through my “pile of opportunity“ for likely candidate figures and other bits of battlefield detritus to sprinkle about. I came up with the following four sets of figures.

I’m a big fan of the Bloody Miniatures range (https://www.bloodyminiatures.co.uk) and I have a nice stash from the recent releases.  I selected a couple of figures that suggested themselves for a base showing men setting up Swinefeathers. One figure was originally thrusting a pole alarm, but with a little bit of conversion, I felt that I had made him look as if he was driving a Swinefeather into the ground. There was also a figure who I thought would make a fine sergeant of Musketeers who would be helping out, setting up a Swinefeather. As well as the two figures I found some suitable pieces of equipment to add to the base; a musket, rest, powder bottle, halberd, and a club to be used to bang in the stakes. With the figures ready, and all the pieces of equipment to hand, I experimented with different positions so I could fit everything on the 60 mm x 40 mm base. This experimentation also showed where I could add Swinefeathers, already set-up, to the base.

Next, I had some Avanpost musketeer figures that were in the process of loading their muskets, but with a small bit of conversion to remove the muskets, I could make them look like they were planting swine feathers into the ground. As with the previous base, I added some pieces of equipment around the two figures to give the impression of a working party.

For the bases showing battle damaged Swinefeathers I was at first just going to model a base with couple of the stakes broken. Then I wondered about adding some wounded figures to the base as well.  On finding a downed horse (also from Avanpost) in my ‘pile’ I thought this would be ideal to add to a base of Swinefeathers.  The horse fitted neatly on to one of the 60mm x 40mm bases and I could add damaged and regular Swinefeathers around it.

Finally, and in a similar way to the previous base, a Warlord wounded musketeer could be added to a base with some damaged swinefeathers. I imagined cannon shot blasting through the stakes just before Imperial musketeers tried to assault the Swedes behind the stakes. 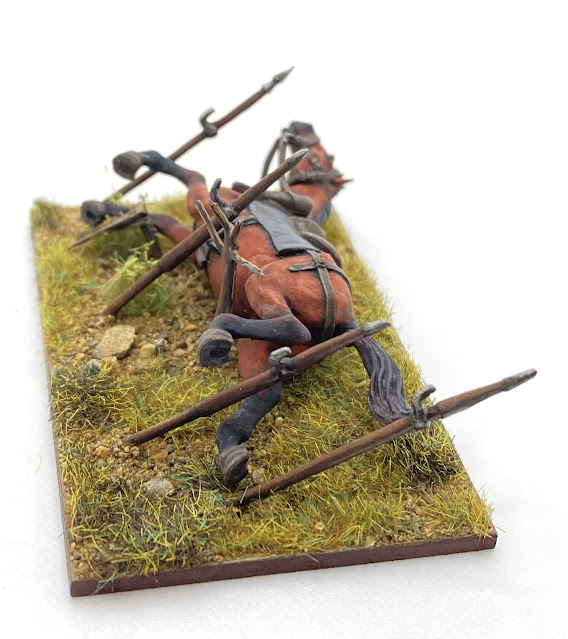 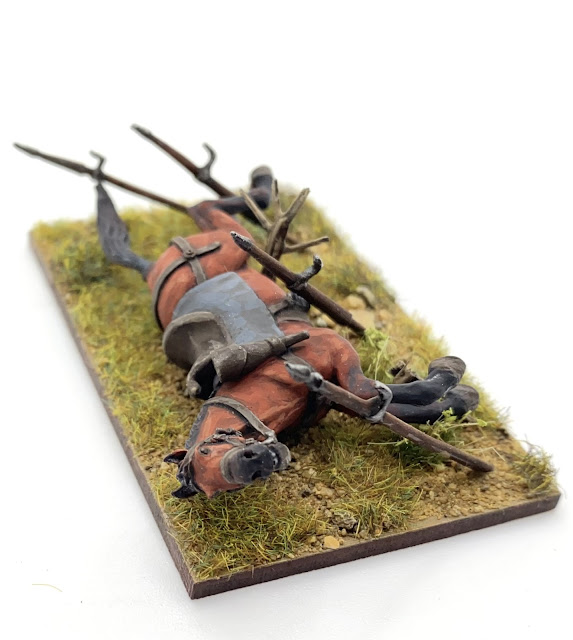 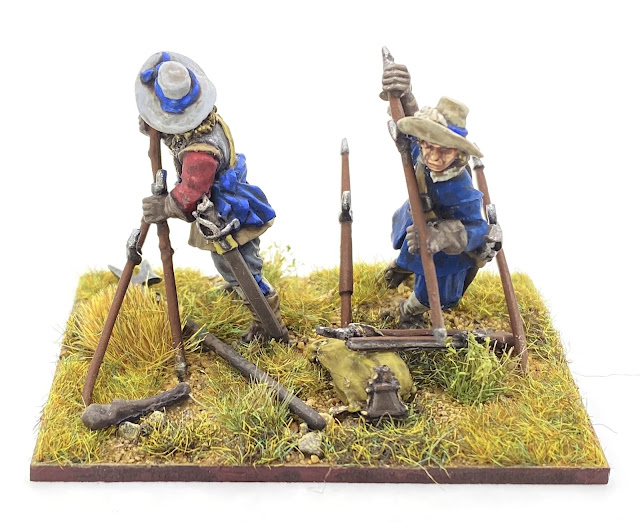 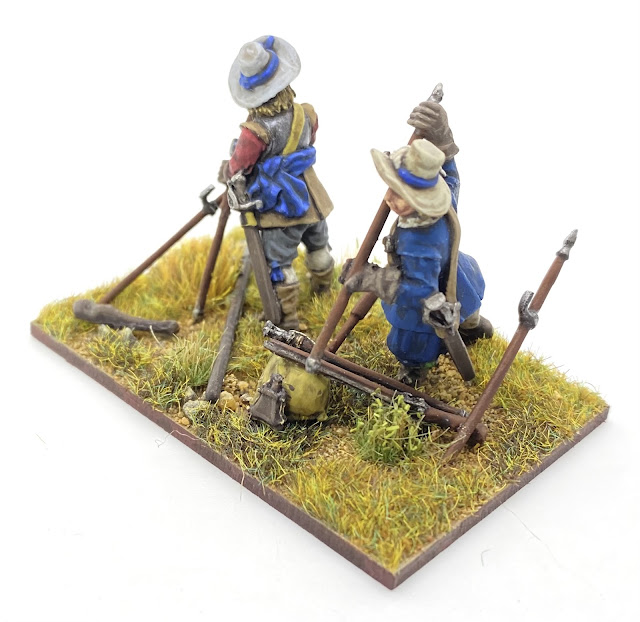 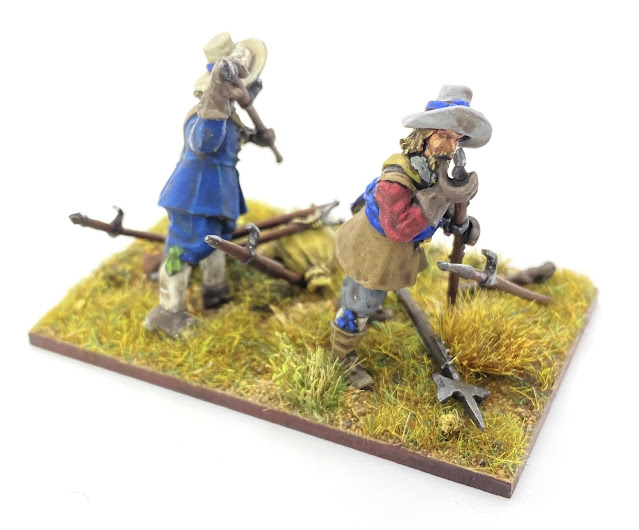 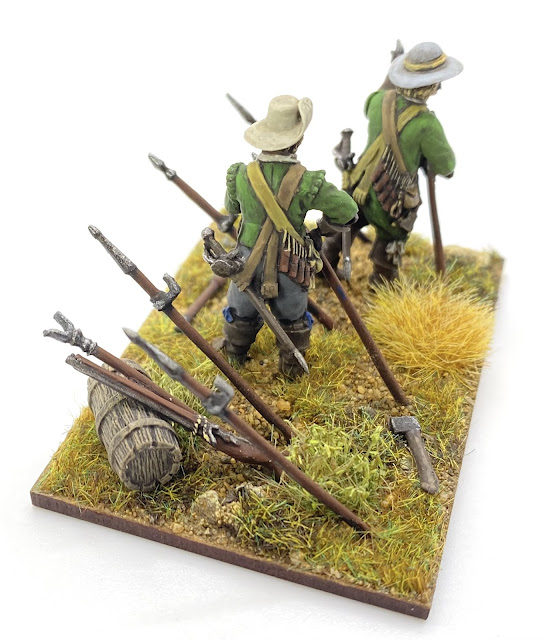 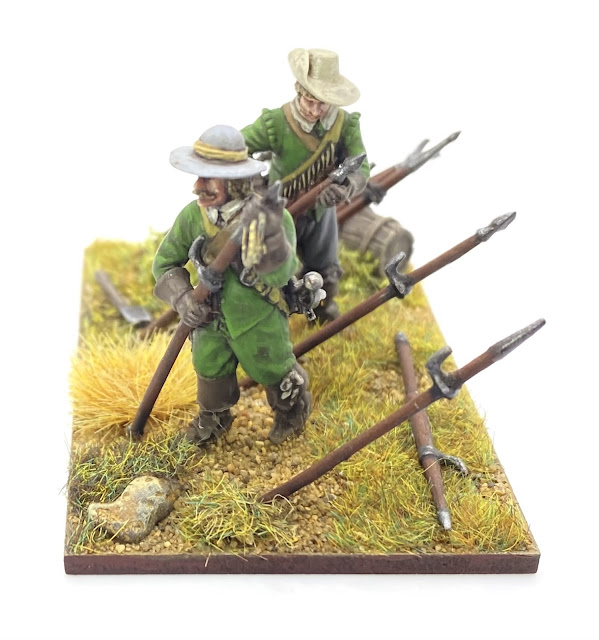 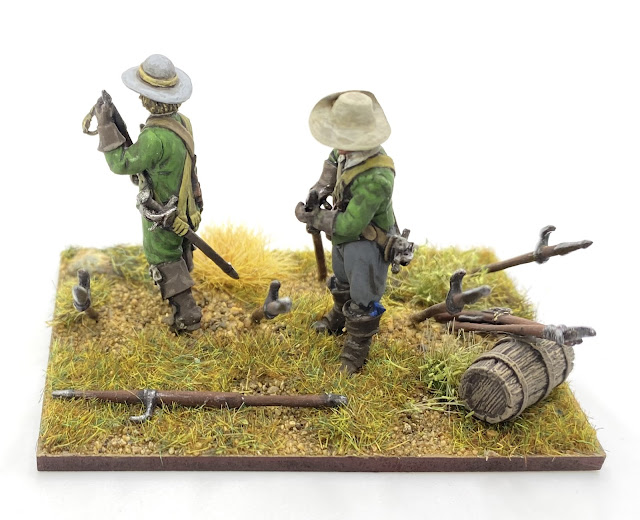 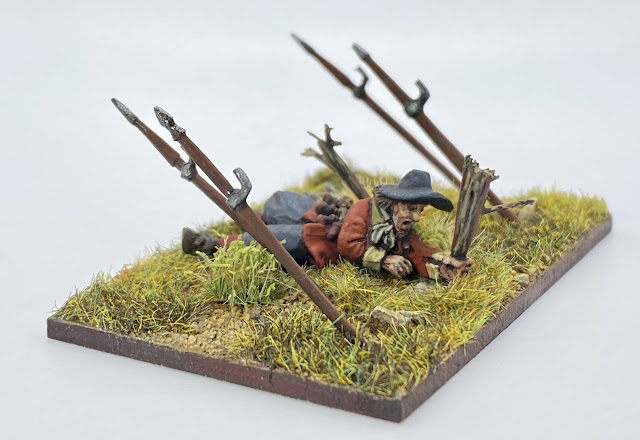 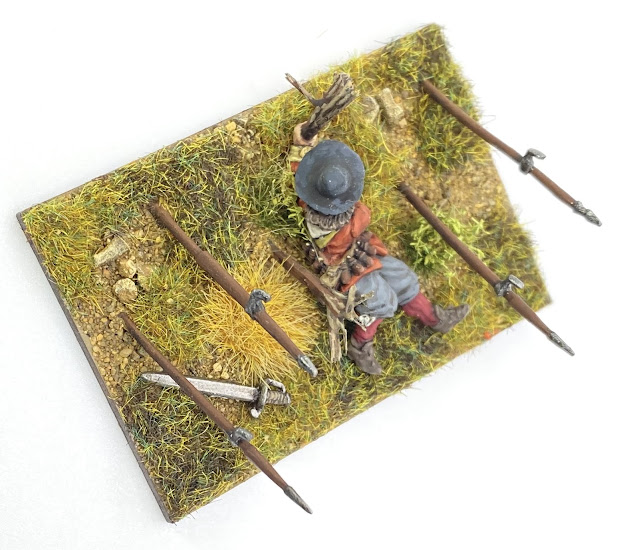 I had fun painting up the few figures and pieces of equipment for the vignette bases. A nice palette cleanser between regular units of figures!

Now that I can deploy swinefeathers on the battlefield some rules are required.  Luckily both supplements for Warlord Games’ Pike & Shotte rules, ‘The Devil’s Playground’ and ‘To Kill A King’, include the same special rules for all sorts of permanent and temporary defences.

Here is their suggestion:

… Effect of such devices is defensive and applied to hand-to-hand, not shooting.

I think these rules will certainly help a unit of shot when it is charged by the enemy. A few trial games will be required to get the feel of the rules’ effect.  Whether it is enough, or too much, will be a subjective judgement as we don’t have much evidence to go on.   I’d be very interested to hear about other peoples’ experiences with swinefeathers in games of the period, whether using Pike & Shotte or other rule systems. 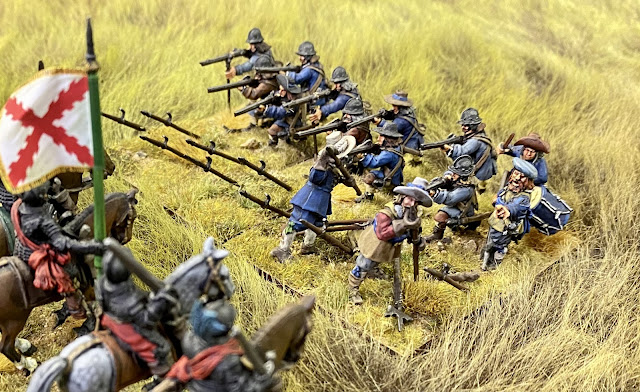 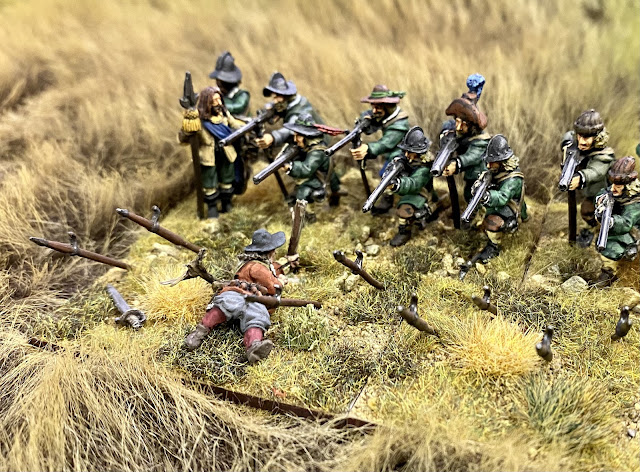 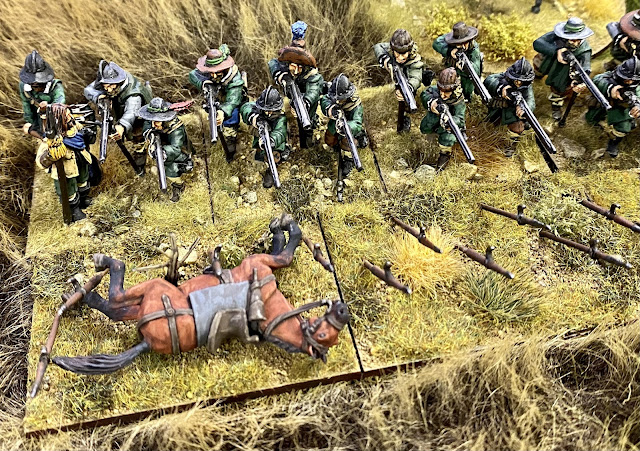 Next time, back to the more regular stuff.