“Finland , Finland, Finland, the country where I quite want to be…”

This post looks at the latest unit for my Swedish 1620s/30s army; a unit of Finnish horse, the famed ‘Hackapells’.

In this period Finland was part of the Swedish Kingdom and so the various Finnish regions provided units of horse to the national army, just as they did in Sweden itself. Although not recruited and equipped differently by design to any other of the Swedish horse, the Finns gained a reputation at the time for: ferocity, scouting, and having an air of Eastern exoticism.

Their period nickname of ‘Hackapells’ (or perhaps ‘Hakkapeliitat’ in Finnish) referred to their battle cry of “hakkaa päälle!” or “cut them down!” that, no doubt, led to their ferocious reputation.  They often seem to have been used to clear away enemy light horse, such as the Croats, when fighting in Germany, and also to have been used in the role as scouts being Gustav Adolph’s “best Cavallerie for Discoverie”. 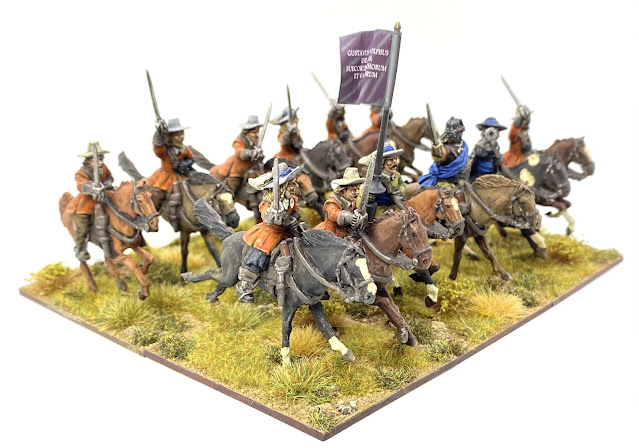 As with all of the Swedish horse, it is difficult to be precise about exactly how a particular unit was equipped. We know that in general Swedish horse were often short of armour, and that the Finnish units were from poorer areas of the Kingdom, so I thought a unit equipped only in ‘riding coats’ would work for the Fins. I have seen some suggestion that they wore morion type helmets but I preferred the classic look of the broad brimmed hat, also used in the picture in the Osprey ‘The Army of Gustavus Adolphus (2) - Cavalry’ by Richard Brzezinski. 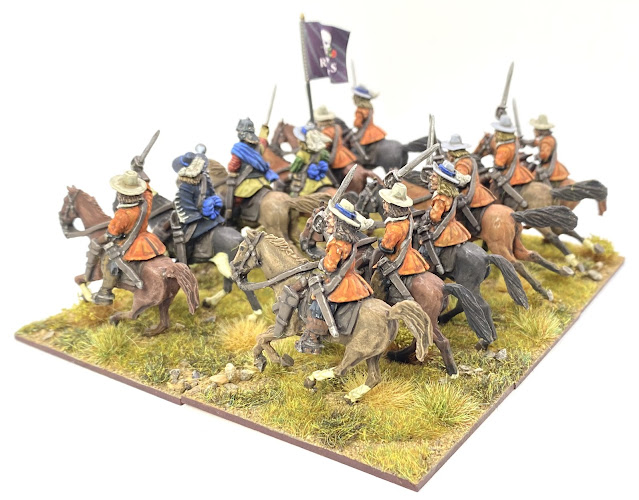 To represent the Finnish cavalry I have used a set of figures from 1st Corps Miniatures.  (https://1stcorps.co.uk/product-category/horse-musket/english-civil-war/)  1st Corps are a long established UK manufacturer of metal figures in 28mm covering an extensive range of periods, including ECW and TYW ranges.  At a recent-ish demo game I was asked if I’d used any 1st Corps figures and I had to admit that I had not, although I’m not sure why (hi to James from Shakos and Sprues!).  I thought this was a good prompt and so when looking for cavalry figures I decided to have a good look through the 1st Corps ranges. 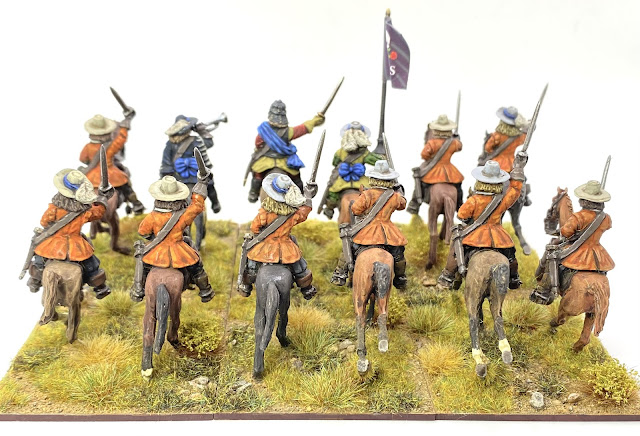 1st Corps do figures in packs of three but also have ‘unit’ deals for units of 12 figures, which is perfect for my cavalry units. In their ECW range they had a nice set of cavalry with no armour, with soft hats, on galloping horses, and with their sword arms very much suggesting they are keen to cut down the enemy. These seemed perfect for Finnish horse. 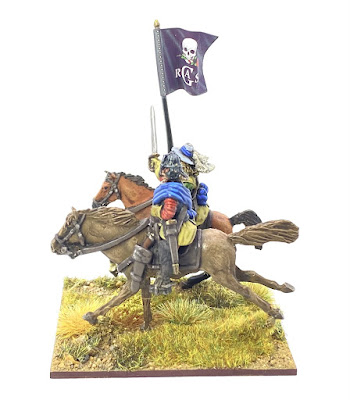 The 1st Corps figures are classic metal 28mm figures and needed the typical amount of clean up for figures of this type. The troopers and officer have separate sword hands which have a neat way of attaching to the figures’ arms, and allow a nice amount of variety in how the resulting figures look.  The figures have nice ‘chunky’ details that were easy to paint.  I did do a couple of minor conversions.  I added a ‘Swedish cavalry’ head from Warlord to the officer, and changed the Trumpeter’s montero hat for a broad brimmed hat.   The striking orange coats were again inspired by the Osprey book. 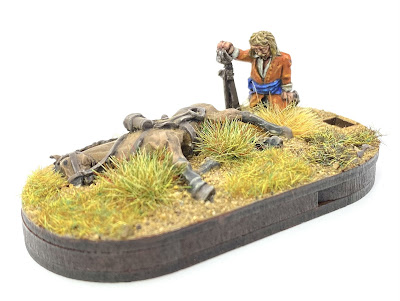 I couldn’t find flags, known for certain, for the Finnish horse in this period, and so I used a Swedish cavalry cornet from ‘Mikhail Betskii Creation’ that I liked the look of.  1st Corps also do casualties (horses and unhorsed riders) so I was happy to add another ‘wound marker’ base to the collection.  The MDF base is from Charlie Foxtrot. 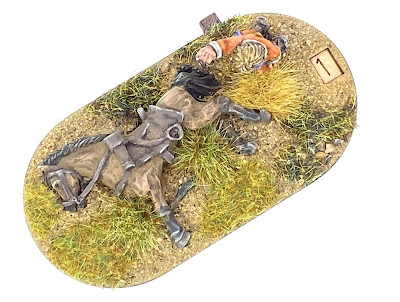 Next on the painting table I’m looking to try my hand at some resin buildings, which is an interesting change from figures, and the remainder of the Yellow Regiment are also looking at me impatiently from the lead mountain of opportunity!