I first became aware of this company a couple of years ago from posts on the Lead Adventure Forum (link), and I was instantly blown away by the quality of their figures. They are superbly detailed and lifelike.  I immediately ordered a few figures to see what they were like in the hand, and I wasn’t disappointed.

Avanpost are a Russian manufacturer and don’t have a traditional website/shop. They use a Facebook group to advertise their ranges (link).  You can also buy them through Mezzer’s Miniatures (link), a UK distributor. They have two main 28mm ranges; Napoleonic (French & Russian) and Thirty Years War (TYW). They also produce a range of really lovely 75mm models for collectors and painters. Their full ranges are available in cast resin, and most of the 28mm ranges are also available in metal. They are on the small side of 28mm and fit perfectly with Perry Miniatures ECW range. I have mixed them in happily with TAG and Warlord as well. However they might seem a bit incongruous in the same unit with Bicorne or Renegade which are at the bigger end of 28mm.

Most of the figures require some assembly, such as adding arms and sword scabbards.  I assume they are designed like this to make the casting process easier. The figures I received have needed little cleanup and fitted together very easily, whether metal or resin, with small dabs of super-glue.

I have only purchased figures from their TYW range so far.  Unusually nowadays, the figures are sold individually which is a real boon when you are trying to find that extra drummer figure, or officer, for example. They cover pike and musket armed troops in a wide variety of classic poses. They also cover artillery (guns and crew), dragoons, harquebusiers, and cuirassiers, with command figures for all types.  The TYW range is pitched at the first half of the 17th century and would work equally well for the Wars of the Three Kingdoms (ECW).

Here are a couple of figures as they arrived from Mezzer’s Minis.  On the left is a resin wounded horse and dismounted cavalryman (an unusual and perhaps unique to Avanpost set!), and on the right a metal sergeant with halberd.  The separate pieces were easy to snip from the sprues, and to tidy up with craft knife and file before assembling with superglue.

Here is the wounded horse after construction.  This is on a Charlie Foxtrot ‘dial counter’ base and will be used. as stamina / wound counter in Pike & Shotte games.

Here is the sergeant after construction.  I intend to swap his halberd for a standard and he’ll join some of his colleagues on a foot command base.

Here are a group of resin and metal foot figures after construction. Hopefully the picture shows the fabulous level of detail in these figures, both resin and metal. 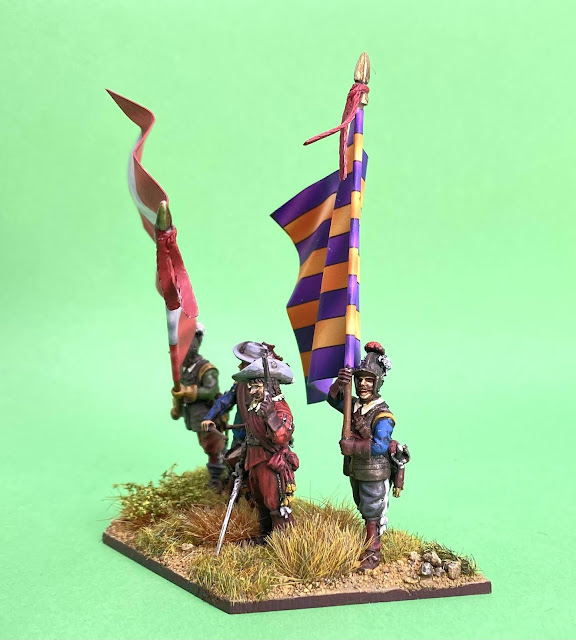 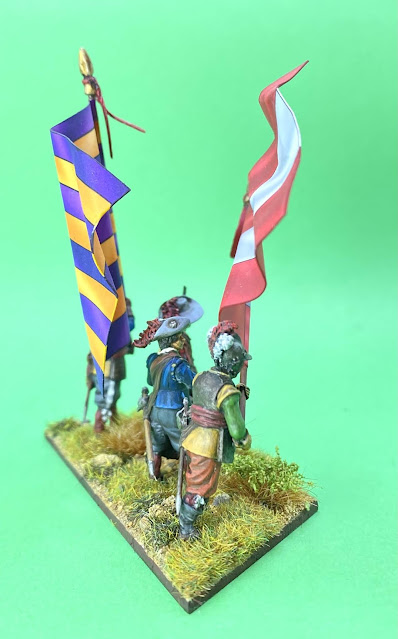 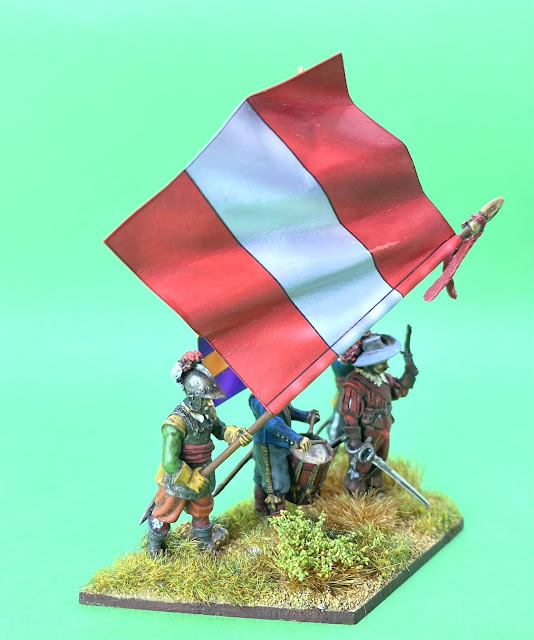 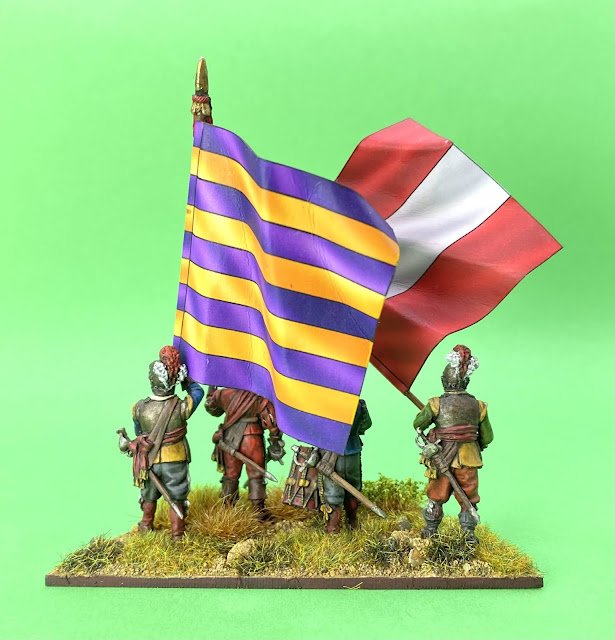 Here is a completed command base using figures from the previous picture. The figures were a joy to paint.  (One caution would be that the figures, both metal and resin, could do with a quick wash in warm soapy water before priming. )

The flags are from another supplier new to me, Adolfo Ramos (link), who is based in Spain. These are really nice flags, and there is a lot of flexibility available when ordering to choose the size of flag you want, and also to have them mounted with cords etc. I chose this ‘full service’ option for these two and was very pleased with the result. 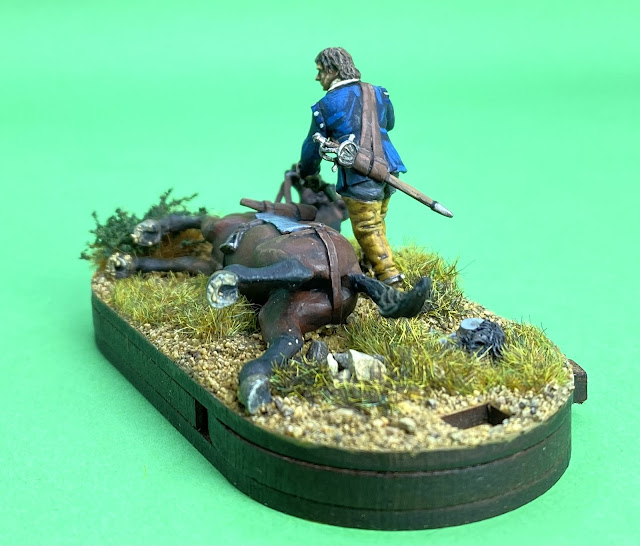 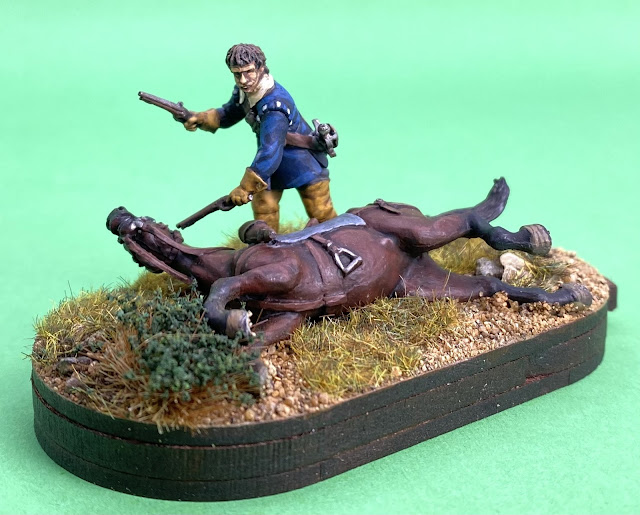 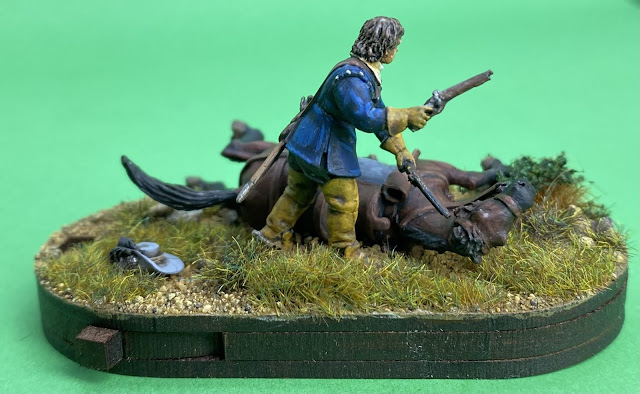 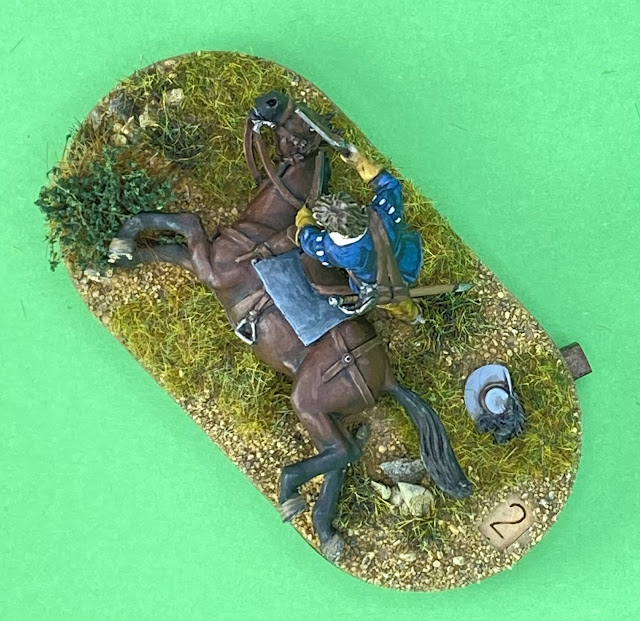 Above is the completed mini diorama for the stamina counter base.  I realise this is perhaps a rather morbid scene, but it’s a good reminder of how horses suffered in this period of warfare. I’m glad that Avanpost chose to include this in their collection so we don’t forget this point.

I have also purchased an artillery piece from Avanpost.  The gun carriage is in resin and you can choose to have the gun barrel in either resin, or beautifully turned brass! These brass gun barrels are little works of art.  I will probably paint over this, but it does provide the option of just weathering the bare metal for you finished model.

I have just two cautions that you should consider with the Avanpost figures. Firstly is that the resin is reasonably delicate and so when there are small parts that stick out on the resin figures I have found them prone to breaking when not carefully handled.  For example, the scabbards are very fine items, and a couple of times, when I have carelessly picked up a resin figure, I have broken their scabbards.  These are fairly easy to repair, but if you expect to be rough with your figures you should beware of this.

The second item is, I suppose, both a plus and a minus.  Wargames figures from other manufacturers have traditionally been sculpted with parts of the figure slightly exaggerated; for example heads, hands and weapons.  This has been partly to do with what we think looks good, and partly to do with traditional sculpting and casting methods.   The Avanpost figures, on the other hand, seem to be very accurately sculpted from a scale model point of view, and this is apart of their appeal.  This scale accuracy includes their equipment and this means that when you compare an Avanpost figure to say, a Perry or Warlord figure, the Avanpost figures’ muskets appear to be much finer and smaller than those on other manufacturers’ figures.  Variety in figure height is ok by me (real people are different heights) but differences in equipment scale can be incongruous. For example, I would be nervous of fielding Avanpost musketeers with musketeers from other manufacturers in the same unit because of the different musket sizes.  I know that actual 17th century muskets did vary in size, but there is only so much difference my eye will accept. I would suggest you get a sample of two to compare with other figures to check for yourself.

In summary, Avanpost offer a range of beautifully sculpted miniatures, some of which are unique to this period.  If you are interesting in playing games in the first half of the 17th century then I’m sure there is a space in your forces for some of these miniatures!  The range is still expanding with the recent release (in resin) of sword and buckler armed infantry.

The final pictures show the command base with an also newly completed 1898 unit of musketeers.