This blog post takes a look at minis from a new figure producer, Bloody Miniatures.

Bloody Miniatures (link) is a new figure producer that has just released (March 2021) their first range of miniatures.  These are aimed at the War of the Three Kingdoms (English Civil War) and the Thirty Years Wars.  The initial release contains four packs, each of four different figures and is focused on equipment and poses especially suitable for forlorn hopes, storming parties and other smaller ‘actions’.  The figures have been sculpted by Nick Collier, who Bicorne and Renegade fans may remember was the designer for those early ranges. In common with Bircorne etc. these are on the larger side of 28mm figures, and are supplied in one piece metal castings (the figures armed with pole arms have separate weapons).

I was lucky to spot the announcement of the Bloody Miniatures range on Facebook on the release day.  I was so impressed with the pictures that I immediately ordered all four packs. The figures arrived in a couple of days and were very nicely boxed.  I especially liked the red tissue paper used in packing which goes well with the company name! 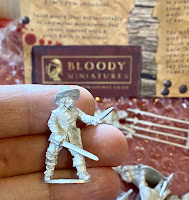 The figures are really nice sculpts, with lots of crisp details.  This initial release are great representations of dismounted cavalry and infantry equipped for close quarters fighting.  This makes them ideal for smaller skirmish games, or as specialist assault units in larger games. I have chosen to make some slight conversions to the first four on to my painting table as a command group.

The ensign with the red colour (above) is supplied with a polearm, so I have simply swapped this for a flag.  I added a drum from my bits box to the carbine armed figure to represent a musician who has slung his instrument and is getting ready to get stuck in.  I didn’t change the sword and pistol armed figure. The ensign with the yellow colour has had his, previously empty, left hand drilled out to accept a flag staff, and I also added a hat, also from my spares box, as he was bare headed and I wanted a more formal look.  (Flags from Adolfo Ramos, link.) 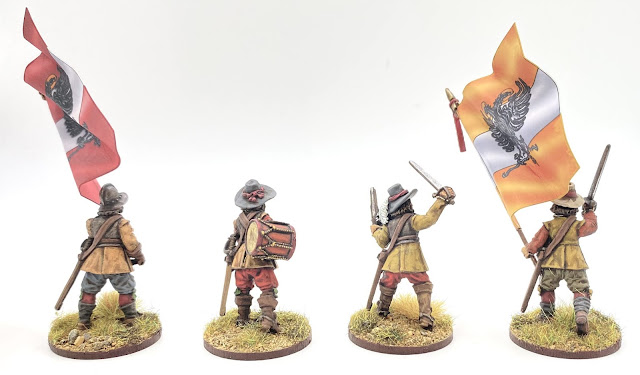 I based these figures on individual, round bases, as I intend to use them in either skirmish games or as lose formation troops in games of Pike and Shotte. I normally use UK two pence pieces (2p) as bases for this type of figure as there are the perfect size, the weight helps balance metal figures and they are magnetic for helping with storage.  Due to ‘the event’ I no longer seem to have a supply of 2ps.  Over the last 12 months I have used up my own stock, as well as raiding the children’s piggy banks etc. I have therefore fallen back on Warbases round, 2mm deep, MDF bases with a 5mm hole (link, and then go to custom items to order the holes link).  Warbases do these in exact 2p diameter size, which is great, and with the addition of a 5mm diameter, 2mm deep rare earth magnet, the bases are also magnetised for storage.
You can see from above that I’ve also taken this a step further.  Warbases made me some custom 2p movement trays, also with holes for 5mm magnets. These are 70mm in diameter with space for three bases.  These are a great way to add some flexibility to your collection; you can use figures individually when necessary, and also multi base for convenience. Two tips. You can get different size magnets but I have found 5mm the best to allow for the weight of a 28mm metal mini. Secondly, when using magnets in the tray, and on the figure base, then polarity becomes important.  When gluing the magnets in you’ll need to check that the polarity matches with the rest of your collection.  I keep one of my completed and magnetised bases handy to use when deciding which way round the magnets need to be placed in new bases.
In conclusion, this is a fantastic start from Bloody Miniatures.  The figures are a joy to paint; very characterful, and with clear details.  There are a few figures wearing triple bar lobster pots that I will probably restrict to representing troops in the British Isles,  but the rest of the figures would be at home in any conflict in the first half of the 17th century.  I understand that the first release was so successful that the initial stock sold out in a couple of days!  There has since been a re-supply and I would heartily recommend these figures to anyone using 28mm figures in this period. A new release is planned for later this year, and I am really looking forward to it - I’m sure it will be something out of the ordinary, and very desirable!
Until next time!
Andy @ The Friends of General Haig (FoGH).
at April 14, 2021