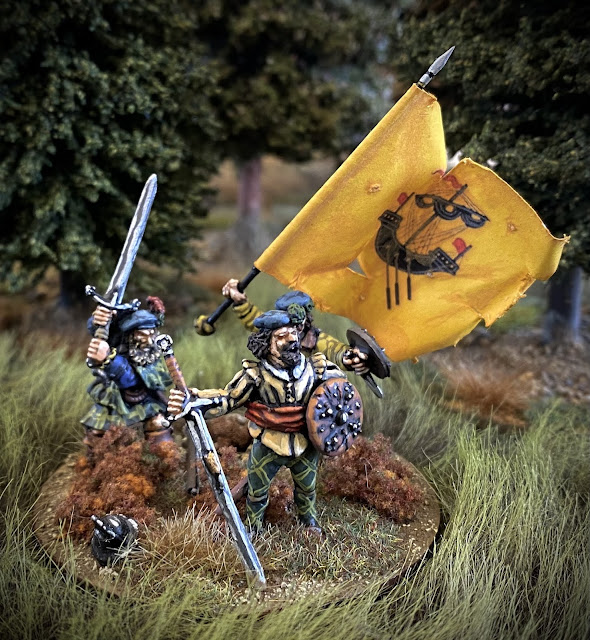 “Health and joy to the valiant Alasdair who won the battle of Auldearn with his army,

With his fine soldiers, who at the outset of their march loved to sing his marching song.”

From ‘A Song To Alasdair Mac Cholla, after the battle of Auldearn’ by Iain Lom, translated from Gaelic by Annie M. Mackenzie

In this blog post I am taking a short break from the Polish-Swedish war and switching to Scotland in the War of the Three Kingdoms (or ECW in old money!).  The lovely folks at Warlord have asked The Friends of General Haig to come to the Warlord Games Open Day on 25th September (https://store.warlordgames.com/products/warlord-open-day-ticket-2021) to put on a game of Pike & Shotte.

Warlord’s Open Day has become a bit of a tradition for us and we’re always happy to make the pilgrimage to the Nottingham ‘Lead Belt’, the heart of wargaming in the UK! 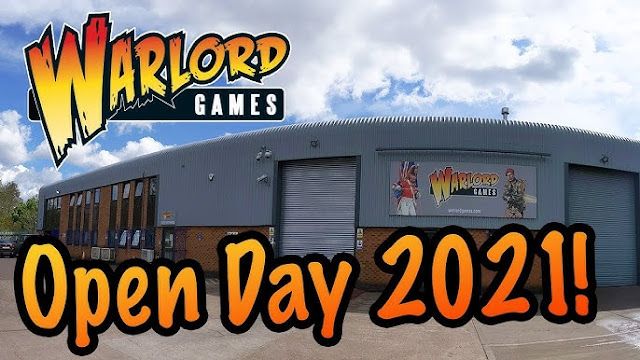 We’ve decided to put on the Battle of Auldearn 1645, in a replay of the game we did in 2018. (You can read about it, including my brief historical introduction to the battle, on the Warlord site here https://www.warlordgames.com/warlord-games-open-day-auldearn-1645/.)  This is a nice compact game, with lots of nice scenery, and two tartan-tastic armies.  In the next couple of weeks I’ll share on the blog some of the things built or painted for Auldearn, as well as the orders of battle etc.

To start things off, here is how I re-created one of the iconic parts of the Auldearn battlefield; Boath Doocot.  This still stands today on Castle Hill, itself the remains of a 12th century motte and bailey castle. This hill was probably Montrose’s command position during the battle and also where the Royal Standard was flown. Archeology has also suggested that the Royalists may have had some artillery firing from this position.

The Doocot, a Scottish version of Dovecot, was a traditional building to breed doves for their eggs, meat and droppings!  The current building held over 500 nest boxes. Recent archeology suggests that the current building was built later in the 17th century, after the battle, but it may have been built on a previous structure in the same position. Taking this information as the inspiration for the terrain piece I set about to model a similar round building. 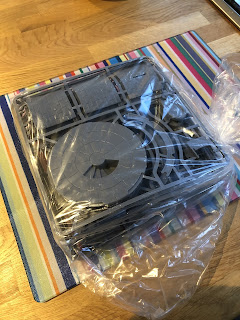 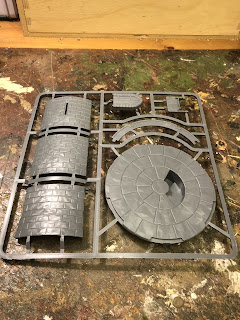 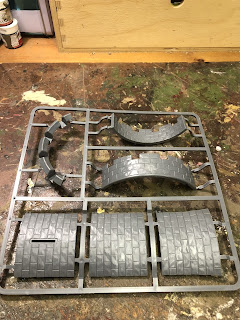 I suppose that I could have just scratch built a round tower but I decided to use a plastic round tower as a base. This used to be available from Warlord, but is now sold by North Star https://www.northstarfigures.com/prod.php?prod=14747 . 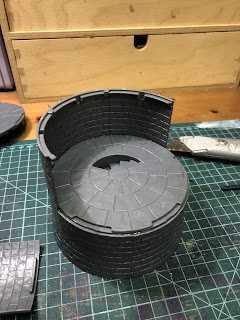 I used just two levels to get the height I wanted for the Doocot.  The kit goes together fairly easily and is very solid.  It is definitely worth dry fitting pieces as a test when building as, although logical, there were no instructions in my copy. 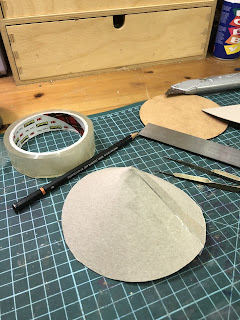 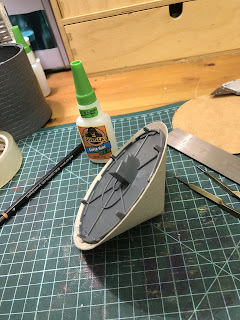 This most tricky bit was making the conical roof.  Now, I’d love to say that I fell back on my school geometry to work out the size of the circle required to cut to make the size of conical roof, but I have to admit that I ended up using trial and error and some card from packaging to get the right result. 16cm with a quarter of the circle cut out seemed to work.  The conical roof was bent in to shape and then held together with sellotape. The cone was then glued on a floor section, and the floor section attached to the tower. 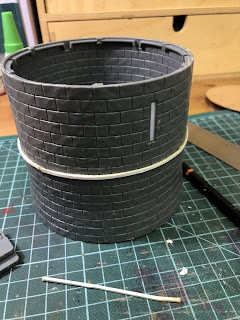 One distinct feature of the tower was a line of running around the building, about half way up the walls. A bit of research suggested this was a feature designed to discourage rodents etc. from scaling the walls to get inside.  Apparently this course of projecting brick work makes it difficult for rats etc. to scale the sheer walls, and then gain entry, to raid the nests inside. This line was replicated on the model with a thin strip of mounting board, glued around the tower. 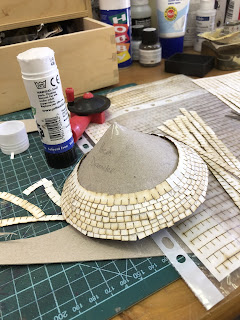 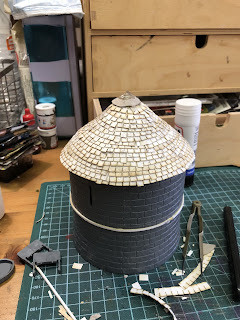 The roof was tiled with strips of tiling available from Warbases in handy A4 sheets. This was a bit fiddly and I’m sure it would be possible to get a better finish if more care / time was taken.  The result here is ok, if you don’t look too closely!  The roof was finished off with a small cap of card. 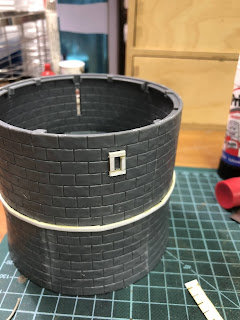 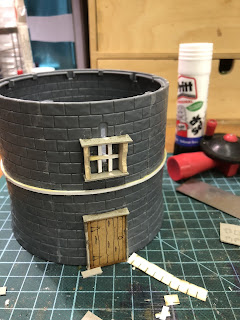 Next a doorway and windows were added using small pieces of card, balsa and a laser cut door, again from warbases. These were modelled on those of the current building there being nothing better to go on regarding the possible original building. 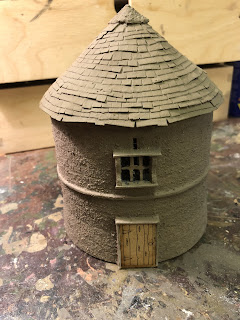 The building was also rendered over the plastic stonework using a mix of PVA and filler, coated in builders’ sharp sand.  The whole building was spayed in Humbrol Dark Earth before being painted. 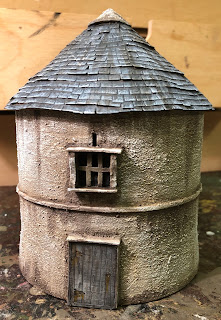 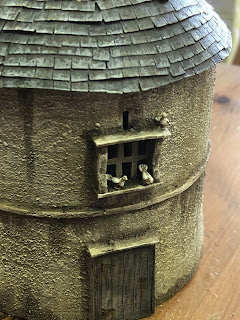 Some weathering with inks, and a dry brush finished off the model.  All that remained was to add some doves, found on eBay.

The final model makes a useful accent to Castle Hill, and for me really marks out the miniature battlefield as Auldearn, even if it is perhaps anachronistic!

Next time I will cover the battlefield and orders of battle.
Alba gu bràth!
Andy @ The Friends of General Haig.