In this blog post I look at the latest Thirty Years War (TYW) release from 1898 Miniatures; the Cavalry.

The post is broadly split in to three parts: a description of the figures, how I found preparing and painting them, and finally the first unit that I have built using the figures.

1898 released these cavalry at the end of 2021, adding to their existing range of infantry and generals for the period. There are nine packs in this release that include armoured and un-armoured riders, wearing helmets or broad brimmed, soft hats, holding pistols or swords, as well as a command pack. Each pack contains three different rider figures which means that you have a lot of variety available. There are three different horse sculpts across the rank and file packs, and the horses in the packs with pistol armed riders have one pistol missing from the saddle holsters which is a really nice touch.

The riders fit on to the horses very easily with the saddle sculpted on to the horse rather than the rider. The horses themselves are well proportioned with the bridle and other tack nicely detailed on the models. The horses are in active poses either cantering or galloping. In addition to the riders’ animation, this will give a great impression of attacking cavalry.

The resulting figures represent the classic early to mid 17th century harquebusier type cavalry. The rider’s armour is mainly limited to back and breast plates, with the occasional figure having some arm protection as well. Helmets are either of the burgonet or single-barred Dutch pot variety although the helmeted packs include a tiny three-barred face plate that you could add to one of the figures to turn the helmet into a three-barred English pot.

They are modelled wearing a buff-coat although this could sleeved or sleeveless depending on how you paint them.  You could of course paint them as wearing riding coats and not buff coats if you choose. Many, but not all, have a scarf/sash, so necessary in a period when cavalrymen of this type looked very similar in all armies.

The figures retain the sculpting style of the infantry. Nicely sculpted, with lots of detail, and every figure has bags of character. I think they really look the part of figures for this period, and with the variety of different rider figures available, you can make a very varied looking mounted force.

The figures come with minimal chipping and filing required. There are some tiny burrs from the casting process, and minor mould lines to be filed.  The metal is the softer style of white metal rather than the stiffer more brittle style of some manufacturers.  Some of the horses have only two contact points with the base and so are at risk of bending at the ankles if roughly handled. I haven’t had any accidents with horses actually breaking off the base, which I think is thanks to the more forgiving, bendy metal.  Where riders’ right arms were not positioned quite to my liking I was able to gently bend the arms in to slightly different poses.

With at the very least a separate scabbard required to be added to every figure, there is some assembly required.  The scabbards can be a little fiddly and so super glue with a spay can activator is definitely your friend at this point. Some figures have a separate right arm that helps add further variety to units and these glue on quite easily.

Once primed the figures are a joy to paint.  The detail is perhaps not as prominent as say a Bircorne or Bloody Miniature figure, but I didn’t have any trouble using my normal methods including washing and dry brushing.

With the style of the figures being quite animated and, to me aggressive looking, I thought they would  work really well as Gustav Adolph’s Swedish Cavalry.  From the late 1620s the Swedish cavalry were adopting a doctrine of being more aggressive and saving firepower to use in close quarter fighting.  Gustav Adolph issued orders that the first rank of cavalry should attack with pistols, that were to be fired just before impact, and the second and subsequent ranks were to attack with swords drawn.

With the variety of pistol and sword armed figures available, I decided to have a front rank with pistols and a rear rank with swords. Swedish cavalry were often short of armour and so I had the front rank all armoured, and the rear rank mostly unarmoured.

As part of reducing his horseman’s reliance on firepower, Gustav Adolph also took carbines away from his cavalry units. This would mean I didn’t get to use the nice separate carbines provided for the figures, and also means that the right hand cross belts on the figures are unnecessary. However I can live with this slight oddity that I suspect the majority of people will never notice!

The cornet / standard bearer is provided with a white metal ‘fluted lance’ to carry a flag. I can never get on with white metal pole arms as I find them difficult to keep straight.  I therefore replaced this with a Warlord plastic fluted lance.  (There is one on every Warlord cavalry plastic sprue and so I have lots of spares!) 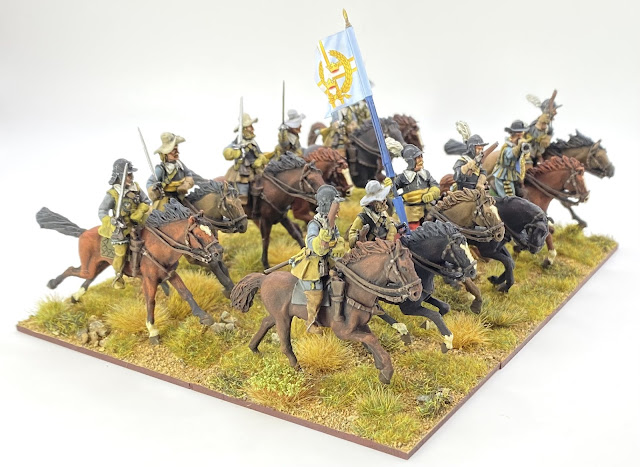 I painted the horsemen mostly in sleeveless buff coats and gave them varieties of  grey for coats and breeches. Sashes / scarves were painted yellow.  There doesn’t seem to be a clear sash colour for the Swedes at this time and so the choice was as much aesthetic as historical. Armour was painted black, and broad brimmed hats were mainly lighter greys that seem to have been favoured by the Swedes. 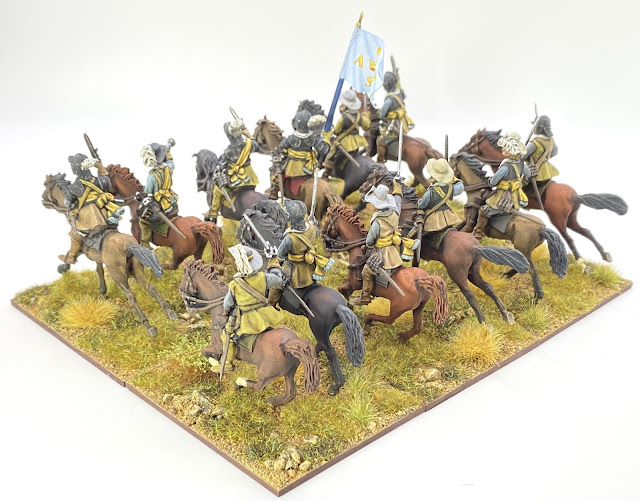 The unit was finished with a cornet / flag from Mikhail Betski at MB Creation, a supplier I’ve only recently come across, who provides some really nice flags for this period. I used the colour of the flag to influence the colours for the trumpeter’s clothing as unit’s musicians were often expensively dressed by the unit’s officer as part of the military fashion of the time. 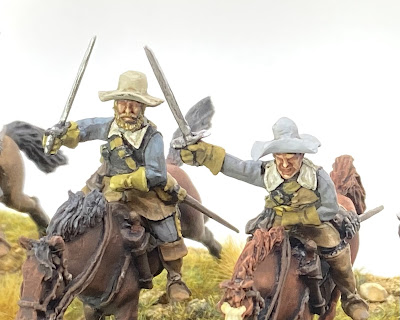 In conclusion, I think the new 1898 TYW cavalry figures are a great addition to their range, and a great resource for all those collecting 28mm armies in this period. All of the 1898 figures have a particular style, but will still work well with other manufacturers. I’m really pleased with the unit I’ve built with them and I will be adding a few more in due course. 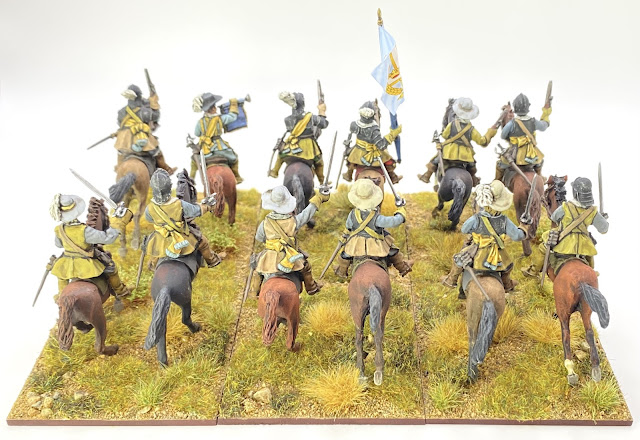 The next figures on the table will be some Polish civilians and another general stand for the Poles.