In this blog post I look at the latest unit from my painting table. A unit of 28mm Swedish horse, for my 1620s/30s Gustav Adolph army, using 1898 Miniatures’ Thirty Years War (TYW) range.

I completed my first unit using these figures back in February (see link) and covered the 1898 recent figure release then. This new unit was approached in a similar way. 1898 released nine packs of cavalry, each of three figures.  I bought one of each pack, and so this new unit was built using the remaining figures (with three left over that will be used to accompany the 1898 TYW general figures that are in the ‘pile of opportunity’). 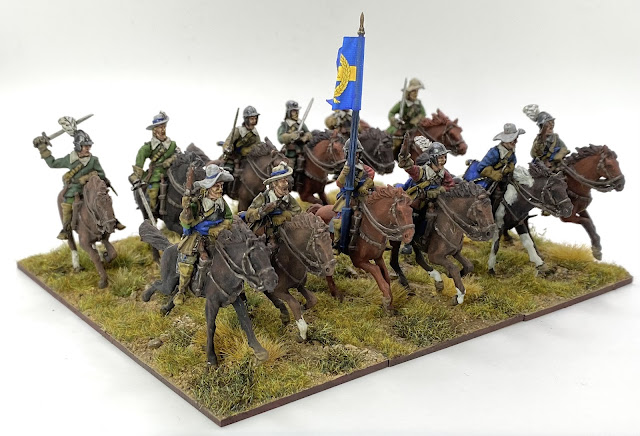 As with the previous unit I have kept with the front rank holding pistols and the second rank with drawn swords, following Gustav Adolph’s instructions for how the Swedish horse was meant to attack.  The first rank was to only fire at point blank range, and the following ranks to fall on directly with cold steel. 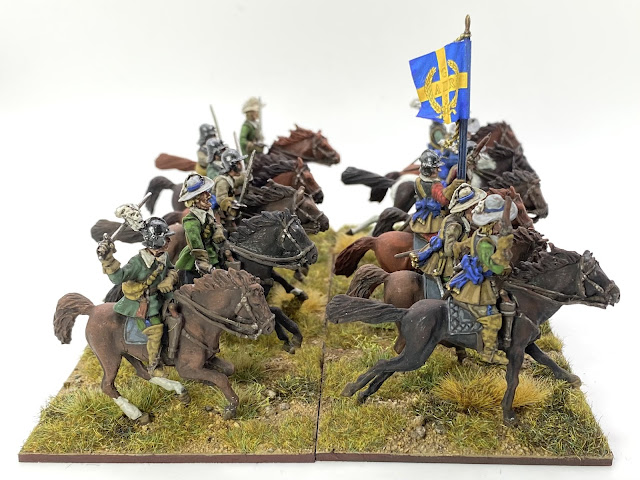 I had used the one command pack on the previous unit and so for this unit I needed some slight conversions. I used the cavalry cornet pole arm and trumpeter’s arm from the Warlord plastic cavalry box which fitted the 1898 figures with a minimal amount of filing and green stuff. 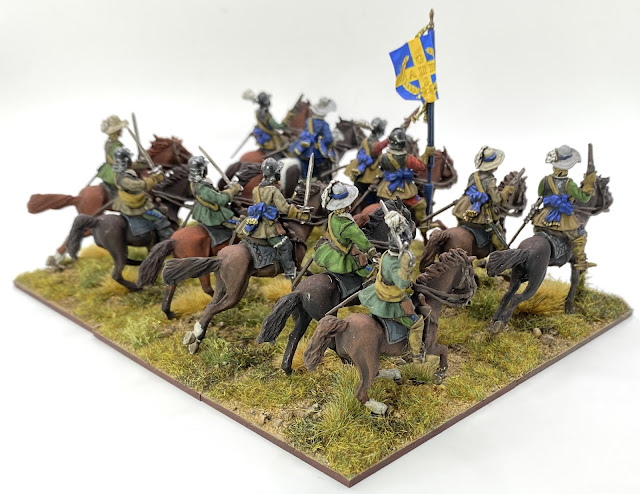 The cornet is again from Mikhail Betski, at MB Creation, and I have also again used the colour of the flag to influence the scarf/sash colour, this time having them a royal blue colour, fringed with yellow.  At this period, my understanding is that, there was no standard sash colour used by the Swedes and I tend to switch between blue, green and yellow as fancy takes me, these colours at least contrasting with the Imperials’ red sashes. 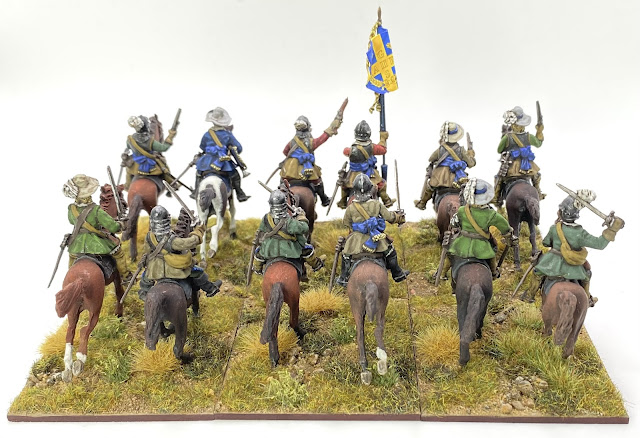 I gave the unit a green theme, painting their riding jackets in different shades of green, with a few sleeveless buff coats in the front rank with the better equipped men.  I also gave the trumpeter a pie-bald horse, after reading that this was popular with the Swedes in this period, when appropriate horses were available.

These were a bit of a slog to get through and I’m blaming that on the summer weather!  Next up on the painting table is the start of a unit that I have been looking forward to painting for a long time.